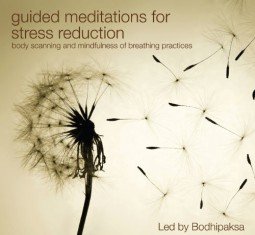 An album of guided meditations for stress reduction is available for download from our online store.

Stress is a disorder of well-being that is triggered by such pressures as the demands of work, interpersonal conflicts, money worries, or family problems — and often a combination of similar factors.

It is said that a certain amount of stress is essential to well being. We all probably remember times when we performed well under pressure, perhaps exceeding our expectations of what we are capable of achieving, and experiencing an increased sense of self-esteem and pride. But when we become overloaded with challenges, and have insufficient time to relax and absorb change, the strains we live with can be damaging to our physical and emotional health.

Normally, we would face a stressful situation and the sympathetic nervous system would kick in and put us into a state of arousal, which would help us to deal better with whatever it is that’s causing us stress. Then the parasympathetic system steps in and calms us down, returning our system to a state of balance and relaxation. In this context, the stress response is a healthy and useful adaptation to our environment.

But what happens with stress is that the sympathetic nervous system is continually triggered, and our parasympathetic system doesn’t have the time or opportunity to bring things back to a balance.

When the sympathetic nervous system is in “always on” mode in this way, it stops being a helpful response and starts becoming a problem. When we are in “fight or flight” mode we are more likely to respond aggressively at inappropriate times, leading to further stress due to conflicts with others.

We are also more likely to make decisions based on short term thinking, because we are very focused on the problem right in front of us. By not paying attention to the long view, we store up problems for the future, which results in — you guessed it — yet more stress. So what happens is that our stresses become self-reinforcing.

This is when stress becomes a trap, and it’s usually when we start to realize that we have to do something about it.