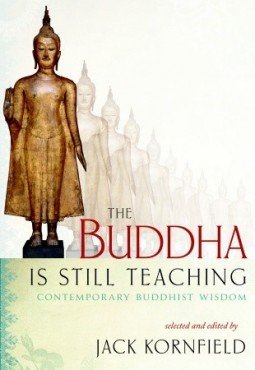 “In these pages you will find the Dharma … Dharma is kept alive by those who follow the path,” writes Jack Kornfield, the beloved American Buddhist teacher and co-founder of Spirit Rock meditation Center, near where I live in San Francisco.

For the past two months I have had this little book in my messenger bag, a compilation of selections that Kornfield tells us will “bring the Dharma eloquently to life for us in our own time, place and culture.” Indeed it is full of inspiration, and has been a treat to open it, never knowing what treasures will await on the page, as I ride the train during evening rush hour, as I relax at home after supper, when I read after my morning meditation.

The selections are generally quite short, ranging from one sentence to a few paragraphs, and they are drawn from many teachers who have inspired my own Buddhist practice over the years. I have been making a practice of reading one selection from this book and then just savoring it as I look around the crowded train, has I take in the silence of the evening, or as I make breakfast.

This book is “dedicated to the generation of teachers who have so beautifully carried the lamp of the Dharma to the West” and is organized in four sections: Wise Understanding; Compassion and Courage; Freedom; and Enlightenment and The Bodhisattva Path, drawn from 75 different teachers. A reader could stay with one section for a while and look for connections between the teachings, or could skip around, allowing the teachings to mix spontaneously. She could read one selection a day or finish a whole section. There are many ways to enjoy this book.

I have enjoyed rediscovering quotes from books I read long ago, now re-reading them with fresh eyes. Words that seem timely and wise from familiar teachers like Dilgo Khyentse, my own teacher’s teacher, from Thich Nhat Hanh, Shunryu Suzuki, Pema Chödrön and Charlotte Joko Beck. And also from teachers less familiar to me, such as Taizan Maezumi, Tulku Thondup, and Noelle Oxenhandler. There is a balanced representation of teachers from different traditions. And I enjoyed hearing the voices of so many women Buddhist teachers. The book has a lovely format. It is small, but dense, the pages are beautifully laid-out and the font is pleasing to the eye.

Jack Kornfield introduces the volume as “a Buddhst treasure: the equivalent of new Buddhist sutras.” He reminds us that the teachings of the Buddha are “the Lion’s Roar, words of fearlessness and unshakable freedom”. I would agree that the wisdom of the Buddhist teachers in this book do point to this fearlessness and freedom. I was, however, surprised to find that not all entries were by Buddhist teachers. In fact, there were even three entries by Gandhi, whose words Kornfield explains “echo those of the Buddha.” He describes these entries as “the good medicine of the Dharma.”

I would argue that Gandhi’ sentiments are not appropriate in such a book, and are not taken by all as “good medicine”. Gandhi was not a Buddhist, he was a Hindu. In his political career Gandhi had a lot of conflict with the community which some refer to “The new Buddhists”, those traditionally considered in Hinduism as “untouchable”, who were followers of the social reformer Dr. Ambedkar. Gandhi opposed many meaningful reforms that would have fundamentally changed the injustice of the caste system in newly-democratic India, and he called the oppressive, non-Buddhist, caste system “the backbone of Indian society.” Gandhi is not a hero to this community, and it seems insensitive to include him in such a lovely volume, considering the ways he blocked Dr. Ambedkar’s political reforms. It is also particularly ironic, since one entry of Gandhi’s is entitled “Religion and Politics”. This selection ends by saying that “those who say that religion has nothing to do with politics do not know what religion means.”

I believe it would have been more inspiring and more appropriate in such a book to include a quote from Dr. Ambedkar, who actually converted to Buddhism, as a way of escaping caste oppression. “Buddhism alone among the world’s religions,” Ambedkar wrote, ” is compatible with the ethical and rational demands of contemporary life.” In terms of “Religion and Politics,” Ambedkar famously said, “My final word of advice to you is educate, agitate, and organize. Have faith in yourself. With justice on our side, I do not see how we can lose our battle. The battle to me is a matter of joy. The battle is in the fullest sense spiritual.” This is “the Lion’s Roar” for our times.

Jack Kornfield himself says that the task of selection was difficult, and I can only imagine that it must have been so. This is, in fact, a lovingly-compiled book and a source of inspiration in many ways. Kornfield writes in his introduction that the book demonstrates that “two and-a-half millennia have nothing to diminish the freshness of the Buddha’s teaching, or their universal applicability of our lives.” Yes! Kornfield also writes that, “The Buddha insisted that his awakened disciples, when traveling to new lands, teach the Dharma in the language and vernacular of their times.” If we believe that the Buddha’s teachings are universal, and appropriate to our times, then let us expand that view to our fellow Buddhists who live outside the United States, and have embraced Buddhism as a way of rejecting 3,000 years of an oppressive caste structure.

The instructions are to read the selections in this book slowly, to listen to them. “Let these luminous words bring The Buddha’s awaking to your own heart and mind. Reflect on them, practice them, let them transform your life.” It is a lovely invitation. Eh ma ho! 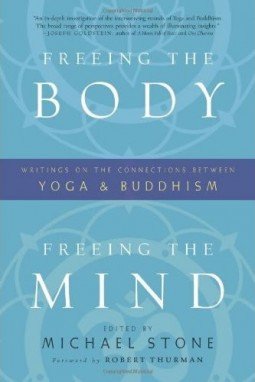 This summer I led yoga on a month-long Buddhist meditation retreat in The Santa Cruz mountains, and when I returned home to the city this book, “Freeing the Body Freeing the Mind” was in my mailbox. It appeared like a welcome-home gift and a tool for reflecting more deeply on my own joyful exploration of Hatha Yoga and Buddhist mediation as one practice.

I had been pondering the relationship between the two traditions and how the two practices support one another, and this book is a deep reflection of these very themes. In a compilation of 13 essays from a variety of perspectives, the authors of this book explore this intersection and how Hatha Yoga and Buddhist meditation can inform and inspire one another.

Michael Stone, in his essay “Practice Maps of the Great Yogis”, asks practitioners to ponder where the mind ends and the body begins, and where the body ends and the world begins. In “Zen Body”, Eido Shimano Roshi writes that studying “the way with the body” means to study the way with our own bodies, directly and with curiosity. And Frank Jude Boccio, in “Mindfulness Yoga”, reminds us that, according to the Buddha, in our exploration of bodily experience we can find discomfort, pain and suffering, but also peace and liberation.

“In order to meditate,” writes Eido Shimano Roshi, “we need our body. We also need our breath.” In his eloquent description of the Ch’an spatial breathing practice, Ming Qing Sifu, in “The Broad Tongue of the Tathagata”, writes of a “great circulation of breath”. “The breath, in a free space,” he writes, “will accomplish the absence of limits”.

“Just stop, look up, breathe in and breathe out,” advises Roshi Pat Enkyo O’Hara, in “Body and Mind Dropped Away”. “Breathing is an experience of prana,” writes Chip Hartranft in “Awakening to Prana”, the body being “energetic by nature”, what the Buddha called “a body within the body”. “The yogi abides,” Hartranft says, “observing the body within the body.” He continues that “the yogi’s vision is yoked to the moment of unfolding, of arising and passing away.”

We enter into yoga postures not to complete some perfected image or gesture, but rather to wake up the intelligent union of mind, body and heart. (from Michael Stone’s essay “Practice Maps of the Great Yogis”)

Ari Goldfield and Rose Taylor, in “Joining with Naturalness”, say that “Buddhist yoga is ideally suited to being practiced right within our daily activities.” and invite practicioners to “arouse the mind of bodhicitta before every practice”, infusing “our whole practice with compassion’s power”. O’Hara quotes the Vimalakirti, urging us to “let go of every shred of self-clinging, to drop all notions of a separate self, all ideas of reality, of body and mind, let it all drop away.” “What is left,” he teaches, “is the ceremony of daily life.”

Ari Goldfield and Rose Taylor, in “Joining with Naturalness”, say that “Buddhist Yoga is ideally suited to being practiced right within our daily activities”, and they invite practitioners to “arouse the mind of bodhicitta before every practice”, to “infuse the whole practice with compassion’s power”. O’Hara quotes the Vimalakirti, urging us to “let go of every shred of self-clinging, to drop all notions of a separate self, all ideas of reality, of body and mind, let it all drop away.” Then “what is left,” he teaches, “is the ceremony of daily life.”

Several of the book’s authors challenge the dualistic view of the mind and body as separate, as well as the popular misconception that yoga is for the body and Buddhism for the mind. In “The Body of Truth”, Ajahn Amaro Bikkhu says that “the Buddha encouraged the kinds of practices that would keep the mind full of the body”, while Shosan Victoria Austin, in “Zen or Yoga” reminds us that “mind is not in the brain: mind permeates the whole.” And Sarah Powers, in “Mind and Body at Ease”, describes a practice of “receptive attention”, becoming “fluid, flexible and adaptable” and “coming home to our bodies in a dignified way”.

The deepest yoga makes us realize that the infinite space of our heart is free of any form and is all forms at the same time. (Ming Qing Sifu, in “The Broad Tongue of the Tathagata: Spatial Breathing in Ch’an)

In “Brahma Vihara, Emptiness and Ethics” Christopher Key Chapple explores three points of contact between Buddhism and classical yoga; the practice of the Brahma Viharas of friendliness, compassion, sympathetic joy and equanimity; an understanding of emptiness as described in The Heart Sutra; and the practice of ethics, compiled as the yamas and niyamas. Many of the essays relate Hatha Yoga practice to the Buddha’s instructions on The Four Foundations of Mindfulness, as well as practice instructions which focus on the body and the breath, in The Anapanati and Satipattana Suttas.

Michael Stone explains that “what Yogic and Buddhist teachings share is a radical challenge to the way we conceive spirituality.” New to me were the ways Patanjali, the author of “The Yoga Sutras” was influenced by the Buddha, and the counter culture roots of both the Buddhist and Hatha Yoga traditions. Both Shakyamuni Buddha and Patanjali questioned Brahminical orthodoxy and the rituals of the Vedic tradition.

Chip Hartranft describes how both the Buddhist path and Patanjali’s Hatha Yoga path rely on “direct seeing”, in a practice centered in the present moment.

What struck me as I finished the book was the depth of the commitment to practice of each of the authors, and their clarity in sharing their wisdom. I read the essays out of order, depending on my mood each day, and when I finished the last one I felt like I had been on an intensive Buddhist Yoga Retreat, led by the authors of these 13 beautiful essays. This book itself was an experience and, for me, the reading of it became a daily practice. I recommend this book as a valuable resource and encourage taking time to savor it.