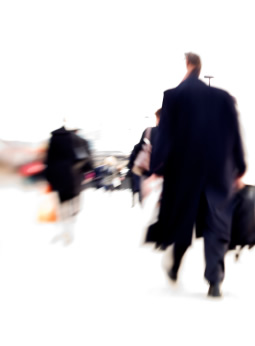 Carol, one of my meditation students, lives in a very noisy apartment in New York City. She wrote: “The subway train is right across the street, the police/fire station is right around the corner, and to top it all off there is a dance club on the bottom floor of my building! I’ve tried pretty much everything — earplugs, music, meditating at work instead of home — the only thing that really works is just to let it go and stop fighting it, but sometimes the noise will still yank me out of concentration.”

I replied as follows: “I think I used to live in that apartment, except that it was in the city center of Glasgow, Scotland. I think you’re on the right track by stopping fighting the noise. Take that one step further and appreciate the noise — embrace it. As you prepare for meditation, really notice and appreciate all of the noise around you.

Trying to fight the noise is unlikely to work. The noise is not going to go away because you don’t like it. If you respond aggressively to it then you’re just getting yourself into a fight that you cannot win. In that apartment in Glasgow I had a dance club across the street, a taxi stand outside the windows, and a washing machine through the wall from where I meditated. When the washing machine got noisy, for example, what I would do was embrace the noise, just as I suggested to Carol.

Realizing this made the washing machine noise just another part of my experience, like the sense of weight on my cushion, or like my breath, or like the feelings in my heart. It was no longer something separate from me that was interfering with my practice, but was a part of my practice.

Doing this, such noises could cease to be a problem altogether, and actually seemed to enrich my experience of meditation. Of course the logic in the above paragraph may not be entirely sound! But the important thing was that in creatively finding a way to stop seeing the noise as an enemy and to start seeing it as just another part of my experience — and a possible aid to may practice — it actually became an aid to my practice.

There’s another approach that’s related, and which I’ve found useful. Often when I’m meditating I begin by becoming aware of the space around me. I very consciously become aware of the space in front, behind, and to the sides—even above and blow me. It can almost feel as if my mind is expending into the space surrounding me, expending even outside of the room that I’m in. (I’m not saying that my mind is actually doing this, just that it feels like that’s what’s happening.) I’m aware of the light coming through my closed eyelids, and of any sounds that are arising.

Rather than being an annoyance or distraction, any sounds that are present become an opportunity to be mindful. I’m practicing “mindfulness of listening.” I remain open and curious about the sounds. I let go of any thoughts that arise, in favor of paying attention to the sounds themselves. I can’t stop sounds, or make them change, or turn down the volume, so I simply accept them. I let them pass through the space of my awareness (which is the same thing as the space around me) without thinking about whether I like or don’t like them.

If there are pleasant or unpleasant feelings that arise in response to particular sounds, I just allow them to be there, but I don’t create stories (“I wish that sound would stop! How long is this going to go on!”).

When I’m doing this, sounds no longer bother me.

How well does this work? One time I was visiting a friend’s house, and I wanted to take a nap. They warned me that there were roofers working on the condo, directly above my head. Sure enough, as I lay down in bed there was a constant “CHUNK, CHUNK, CHUNK” of nailguns, just a few feet over my head. Within minutes I was asleep and I had a delicious 90 minute nap!