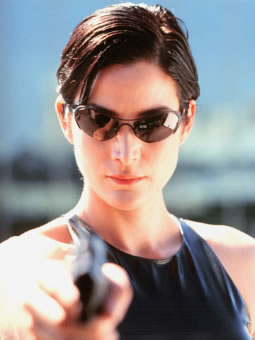 My daughter is seven, and the other night I rented The Matrix and we watched it together. She loved it, and wants to see Matrix Reloaded with me too. So I was wondering: Am I a bad father? The other thing is, I recognize many Buddhist principles, such as the four noble truths, but I don’t want to be a vegetarian, and meditating is no fun. Can I call myself a Buddhist?

Thanks in advance, Conrad

Firstly be warned that your daughter may have a very hard time following the dialogue in The Matrix Reloaded. Not that it matters.

And I’ll let you in on a secret: meditation is great fun! Often we forget to tell people this. To prove it, I will recount an experience I had. Once after many days of meditating in silence, I walked into the bathroom and saw that the wall was covered with ants. (It was hot — spring in the Sierra.) The ants were moving in fascinating patterns. I was riveted — and stood there like a zombie, contemplating various implications, staring at them for a long time. Now doesn’t that sound like fun? Plus, it was free.

But let me venture a guess here a minute: instead of the above-documented fun of sitting for hours and hours and hours in silence, you prefer to spend those hours with your daughter watching violent special effects, right? Tell me Conrad, how long do you think it’ll take you to get enlightened that way? On the other hand if you stick to The Matrix (original) you can still be a Buddhist — just focus your attention on what Morpheus says and watch your breath.