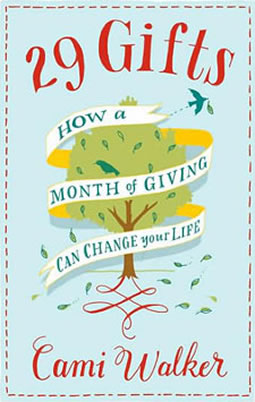 Diagnosed with MS at age 32, Cami Walker thought her life was over. But when she took up a challenge to give 29 gifts in 29 days, her life started taking off in amazing directions. Sunada reviews 29 Gifts, the remarkable true story of how one woman rose above her debilitating illness — and started a worldwide movement that has inspired thousands to work toward reviving the spirit of giving in the world.

Cami Walker seemed to have everything going for her when a diagnosis of multiple sclerosis put a screeching stop to all her plans. Her condition had degenerated rapidly in just two years — she lost vision in one eye, and found it increasingly difficult to walk. Unable to work, deep in debt, and with her brand new marriage under strain, she fell into a suicidal depression.

The gifts didn’t need to be big. Anything would do, as long as it was given authentically and mindfully.

It was her friend and spiritual teacher, Mbali Creazzo, that gave her a seemingly ridiculous prescription: give 29 gifts in 29 days. Mbali told Cami she was focusing too much attention on the disease, and hence was feeding it. So instead, try turning that momentum around by giving to others. The gifts didn’t need to be big. Anything would do, as long as it was given authentically and mindfully.

Many of the things Cami gave were indeed very simple — a tissue for a tearful friend, spare change for a homeless person, a homemade meal for her husband. The book chronicles the amazing shifts that began to take place for her over the month that followed. It’s a true-to-life testament to how the quality of our thoughts has a direct effect on the quality of our lives.

Some of the gifts weren’t even “things,” and brought along surprising lessons to the author. For example, on Day 2, Cami realized she could stop apologizing every time her acupuncturist friend came to pick her up to take her to the clinic for appointments. Letting go to her newly emerging sense of gratitude, she thought, “Just as I am trying to give consciously now, I will try to receive consciously, too.”

On day 6, a particularly rejuvenating yoga class inspired her to chant spontaneously, “May all beings everywhere, including me, be joyous and free.” Later when she began to doubt whether this gift was good enough to count, she realized how her own perfectionist nature had been getting in her way her whole life. And so by allowing that simple mantra to count as her gift for the day, she found yet another way to let go and open herself up to life.

by stepping outside of our small, self-contained worlds, we become part of something greater than anything that any of us can be or do by ourselves.

Cami understood from the very start what the true spirit behind this exercise was. It’s not about literally giving 29 gifts. It’s about living every day with a generous frame of mind — kind, gracious, and willing to open up to whatever life brings our way. Gradually, she began to see larger lessons as well – that by stepping outside of our small, self-contained worlds, we become part of something greater than anything that any of us can be or do by ourselves.

A year later, Cami’s life looks very different from where she began. She still lives with MS, but her symptoms are much improved. Her vision is back, and she walks on her own most days. Recent diagnostic tests have been clear, showing that her disease has stopped progressing. Her relationships with her husband, family, and friends are more intimate and fulfilling. She’s still in debt, but is paying off the loans regularly. She no longer worries about money, and sees it as “an endless resource that exists in the world and I trust that God will provide us with the funds to meet our needs.”

Her story has also shown me that one person can make a difference, and that wholeheartedly giving of myself – and just as importantly, believing that I am worthy of doing so — is really all that’s needed.

I have to be candid here for a moment. I typically don’t go for books of this genre. Autobiographies about life-changing spiritual awakenings are generally not my cup of tea. But what really impressed me about 29 Gifts is how far the author has gone to walk the talk. It turns out 29 Gifts is far more than just a book telling Cami Walker’s personal story.

It was somewhere around Day 5 that Cami started thinking big. What if thousands … or even millions of people committed to give 29 gifts in 29 days? What effects might that have on the world? And so she started with a simple idea to launch a website, www.29gifts.org, to encourage others to take up the challenge and share their stories. Three years later, this little idea has blossomed into a thriving global community with several thousand members from 38 countries. Its mission is to create a grassroots revival of the spirit of giving in the world. The last section of the book contains nine selected stories from members of the 29 Gifts community, and the website has thousands more.

29gifts.org has also spawned humanitarian projects all around the world that have done some powerful work. There’s Operation Teddy Bear (www.teddybearcare.org), which provides teddy bears, food and other personal gifts for children living in poverty in South Africa. And there’s Seattle Youth Garden Works, which trains homeless and underserved youth in basic job skills by helping them grow organic fruits and vegetables and sell them to area farmers markets. You can see a long list of wonderfully inspiring projects at the 29gift.org website.

In an interview on National Public Radio, Cami beautifully summarized what she learned as follows:

“I didn’t know that when Mbala gave me this suggestion, what she was really trying to help me to do was to open up. I don’t know who said this …but a closed hand cannot receive. And that was me. I was just this tight-fisted, resentful, angry, frustrated young woman at the time that she gave me this suggestion. Over the course of those first 29 days I really did feel myself open up and begin connect on a higher level with people and have more meaningful interaction with others…

“I was not someone who was good at accepting support or assistance from others before doing this, and certainly before my diagnosis. I was very independent, and the loss of certain abilities — my physical abilities, and even some cognitive abilities to some extent — was a huge blow. The giving is what has helped me stay centered and balanced. It’s something that’s made me feel like I’m a part of the world at large. I hope that’s what it does for others too — to help them see they’re not alone in this world.”

So what started as an exercise to get herself feeling better grew into an inspiration to be a force for good in the world. Her story has also shown me that one person can make a difference, and that wholeheartedly giving of myself – and just as importantly, believing that I am worthy of doing so — is really all that’s needed.

So … it’s gotten me thinking. How can I start giving of myself more, starting today? And perhaps you’d you like to join me?

Sunada Takagi
Sunada Takagi is on a mission to help people transform their lives through mindfulness. Her work includes leading classes in Mindfulness-Based Stress Reduction in the Boston area, and coaching individual clients from anywhere in the world via videoconference or phone. Read more at her site, Mindful Purpose Coaching. Sunada also teaches and leads retreats at the Boston Triratna Buddhist Sangha and Aryaloka Buddhist Center. Sunada was ordained into the Triratna Buddhist Order in 2004. This is where she received her name, which means "beautiful, excellent sounding." You can follow her at her Mindful Living Blog as well as on Facebook.
generosity, giving