“A Commuter’s Guide to Enlightenment,” by Dr. Stewart Bitkoff 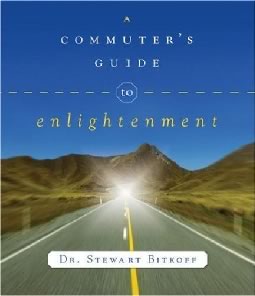 Collectively we’re spending longer and longer commuting: The average American takes around 30 minutes to get to work, and in large cities the drive can take much longer. In rural areas commuting can also eat up the miles and hours: I know two Buddhists in New England who each drive 1000 miles (1600km) per week.

It’s even worse in Europe; in my native UK the average commuting time is 45 minutes (although that’s more likely to be in some form of public transport).

Even without those extremes, commuting makes for a lot of time spent in cars, trains, buses, and even for some people airplanes. It’s not always pleasant time either; stop-go traffic is increasingly common, public transport can be crowded and unreliable, civility seems to be on the decline, and the term “road rage” has entered our lexicon as we become more and more frustrated with sharing our commute with an ever-increasing number of people. I’ve labored the point enough; we all know that getting to and from work can be a major source of stress.

Traveling is also an opportunity, however. Here and there you’ll find pointers for how to make commuting (and especially driving) more of a spiritual practice. Thich Nhat Hanh offers some advice, Dr. Saki Santorelli in “The Family Therapy Networker” has some useful tips, as do we here at Wildmind.

I was therefore pleased, intrigued, and even excited when I was invited to review “A Commuter’s Guide to Enlightenment,” and looked forward to a more thorough exposition on how driving can become a spiritual practice. The “Commuter’s Guide” is written by Dr. Stewart Bitkoff, who had a long daily commute in and around New York City for most of his thirty-year career as a specialist in therapeutic recreation and psychiatric rehabilitation. Dr. Bitkoff writes from a Sufi perspective, and if you know little about Sufism you will almost certainly have heard of Rumi, the famous Sufi poet of the 13th century. Sufism is a mystical branch is Islam in which the seeker aims to come into the presence of the Divine.

And although they say you should never judge a book by its cover, I was taken by the small format and attractive presentation of the “Commuter’s Guide.”

All of this raised my hopes, although I must confess to having experienced some disappointment while reading the book.

Dr. Bitkoff chose to structure his book around the eight and a half miles he formerly traversed daily on the Major Deegan Expressway, with a chapter for each mile (giving us eight and a half chapters — a nice touch). Each chapter is loosely themed around a topic, such as Signs, Learning and Life (Chapter 2), The Way of the Heart (Chapter 5), and Higher Potential (Chapter 8). Each chapter is comprised of a number of short sections, on average about a page long, which are generally reflective and sometimes instructive in nature.

All of that again is very promising, so why did I find this book to be disappointing?

First, there’s a lack of immediacy about the writing. Commuting these days is nothing but dramatic, but there’s no sense of drama in the book. It’s as if the pieces dealing with actual experiences of commuting were written years after the events in question. I longed for an “in the moment” blow-by-blow account of the problems of commuting and the kinds of spiritual practices that can help to make that time more tolerable. Towards the end of the book I noticed a couple of examples of present tense writing, but those are few and far between and seemed thrown in for variety.

Second, while there are a few specific examples of how to engage with commuting as a spiritual practice, many of the more reflective passages left feeling unsatisfied. A typical example would be an anecdote about a flat tire followed by a statement along the lines of: “Sooner or later, we are all victims of the potholes of life.” These one-liners sound like forced attempts to connect the specifics of commuting with the details of spiritual practice, and to my ears sound trite.

Third, some of the language in the book struck me as being life-denying. There are several instances where the author says things like, “Much of our lives is spent doing things we don’t like to do but have to do,” (emphasis added) or “part of me accepted that I had to travel this highway everyday.” I find it profoundly un-useful in my own life to adopt the attitude that I “have to” do certain things, and much more useful to think in terms of choosing to do things even though I don’t necessarily like doing them. Nobody “makes” us commute. It’s a choice.

This is not to say that the book lacks value altogether. There is useful advice scattered throughout the book — that how we react to things is something that can be changed, that we can enrich our lives by creating a “happiness calendar” of the little things we appreciate, that using and “focus words” in conjunction with the in and out breath is a useful way of practicing while driving, to give just a few examples.

Yet these useful tidbits were, for me, overwhelmed by the sheer number of passages that I found uninteresting, or even offputting. There are some dry statistics. There are a number of passages which feature fictional conversations between the “traveler” and the “monster,” which have all the portentousness of late 19th century Theosophical writings. Some of the teachings even jar: “If you want to be courteous and repeatedly let others pull out in front of you, you’ll never reach your destination on time.” That doesn’t fit with my experience, and if I have a choice between being rude and being a few moments late I know which I’d choose.

And there is very little discussion of the ecological implications of commuting; it’s not until the eighth chapter that there is any mention at all of the ecological havoc wrought by our commuting habits, and the treatment of the topic is perfunctory.

Those whose practice is rooted in the close and precise observation that is fundamental to mindfulness meditation may wish — to use a commuting metaphor — to steer clear of the Commuter’s Guide. However, perhaps for those interested in exploring the intersection between Sufism and modern life, this book may have much to offer. And for those interested in a largely inspirational spirituality rather than more specific guidance, this book may also be of interest.

As well as teaching behind bars, Bodhipaksa also conducts classes at Aryaloka Buddhist Center in Newmarket, New Hampshire. He muses, rants, and shares random aspects of his life on his blog at bodhipaksa.com