“Awake at the Wheel: Mindful Driving” by Michele McDonald 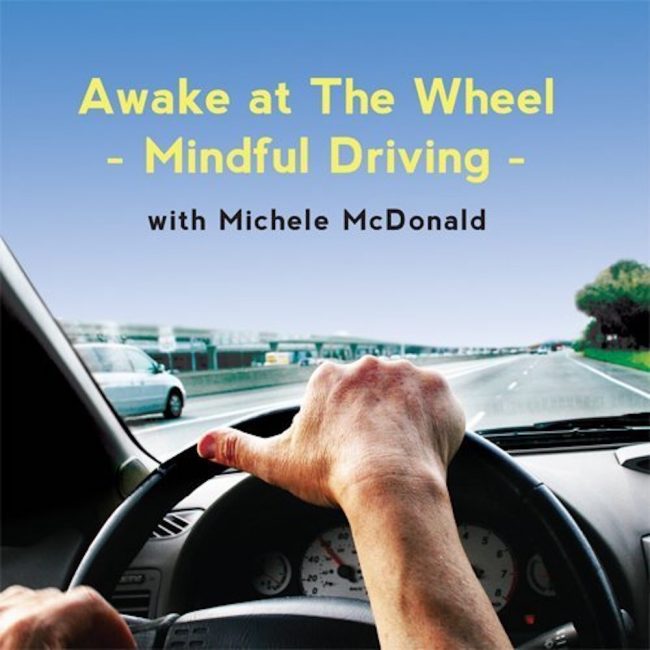 There are pitfalls in listening to mindfulness tapes in the car. Once I was talking to a woman at a workshop I was leading in Spokane, and she related that she’d once been so engrossed in a mindfulness tape by Thich Nhat Hanh that she’d rear-ended a truck. It’s for that sort of reason that I’ve never acted on any of the suggestions various people have made over the years that I should record a CD about mindful driving.

Michele McDonald, however, is made of braver stuff, and with both hands firmly (but gently) on the wheel she set off to record guided meditations that help turn driving into a mindfulness practice. And she’s done a good job.

Awake at the Wheel is a two-CD set of mindfulness exercises, also available as a download. There are seven exercises in all, from around five minutes in length to just over 16 minutes. The same exercises are repeated on both CDs, with less guidance being given in the second set.

McDonald is the founder of Vipassana Hawai’i and has been teaching vipassana meditation for over 25 years. Her Facebook page says that she has been a “quiet pioneer, having being the first woman to teach a formal retreat in Burma.” This experience shows, for her teaching in Awake at the Wheel is exemplary. She begins, in the introductory track, with emphasizing the need for safety, care for ourselves and others, and lovingkindness. And the final track is simply entitled “Kindness,” and is a what I’d call a “moving metta (lovingkindness)” practice. This framing of the entire program in terms of mindfulness is good on two counts: first, the listener may (we hope) avoid the pitfall of rear-ending a vehicle while listening to someone talk about mindfulness, and second, it emphasizes that lovingkindness and mindfulness are complementary, and even inseparable, qualities.

McDonald’s teaching is carefully crafted. She introduces mindfulness skills a little at a time, first just emphasizing the two “anchors” of noticing the sensations in the hands, and what we’re seeing in our visual field. In the first exercise she rather cleverly asks the driver to use oncoming regularly spaced objects (think telephone poles or fence posts) as ways to break the experience into manageable chunks. She builds from this to noticing the thoughts that arise when we space out and slip into autopilot, skills of “noting” (gently applying mental labels to our experiences), being aware of the body, our hearing, and our emotions.

In several cases she introduced a brief exercise, and then asks us to repeat it. This is an excellent way of helping people to, as McDonald puts it, “build a skill-set.” Her choice of words is excellent, and she has some insightful phrases, such as “The willingness to start again is the most important aspect of mindfulness.”

There were times that I thought she failed to suggest noticing experiences that it would be natural to pay attention to while driving. For example, she suggests that in our mindfulness of hearing we can pay attention to the sounds of birds (which I don’t think I ever notice), but doesn’t suggest being aware of the sound of the engine, or the swoosh of passing vehicles. When being aware of the body she doesn’t mention being aware of the movements in the arms. But these are minor points, and the mindful driver will no doubt notice these sounds without having them pointed out.

This CD set is, as I indicated, designed to be used while driving rather than listened to at home as a rehearsal for driving. I confess I listened to the program in my office, because I wanted to be able to take notes, and because I don’t do enough driving (I rarely drive for more than 10 minutes) to be able to listen to the whole program in a reasonable length of time. The exercises are, I think, more likely to be useful on longer, unbroken drives, rather than in stop-start driving in a city. When the traffic is heavy, or when I’m having to pay attention to navigating, I tend not even to listen to music. I don’t think that under those circumstances I would even attempt to listen to instructional guidance of this sort. I’d advise potential listeners to think carefully about which drives are the most suitable for listening to a program of this nature, taking into account driving conditions and the amount of time available.

There was perhaps only one thing I thought could have been usefully added to the mindfulness instructions, and that would be a brief track to be listened to while stuck in a traffic jam or while at traffic lights. The impatience and frustration that can arise in those situations is one of the most difficult things that drivers have to contend with.

Overall, however, this is a valuable contribution to the “oral literature” on mindfulness, and one for which there is a great need. I hope that the “mindfulness” label doesn’t put anyone off, because all drivers would benefit from listening to Michele McDonald’s skilled coaching.

Bodhipaksa
Bodhipaksa has been meditating since 1982 and teaching since around 1989. He is a Buddhist practitioner and teacher, a member of the Triratna Buddhist Order, and a published author. He launched the Wildmind website on November 11, 2000. Bodhipaksa has published many guided meditation CDs, guided meditation MP3s, and books. He teaches in various meditation centers around the world. He is supported by donations from members of the Wildmind community. If you're interested in becoming a supporter and in getting access to more of Bodhipaksa's teachings, please click here to learn more about his meditation initiative.
driving, guided meditation recordings, Michele McDonald, mindfulness in daily life, reviews, vipassana