Dharma in Hell: The Prison Writings of Fleet Maull 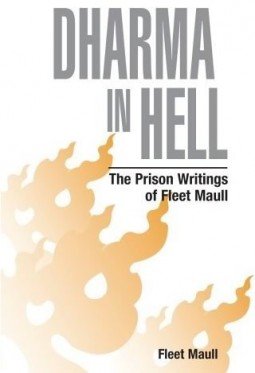 In a sense we all live in a prison, but a life of literal confinement can force us to confront our existential situation — and our need for change — with unflinching honesty.

As the subtitle indicates, this is a collection of writings; of the nine chapters comprising the body of this text five appear to be written while the author was still in prison. A sixth chapter appears to have been composed within two weeks of his release. The remaining three chapters recount the nature and experience of the author in relation to practicing the Buddha’s path.

Chapter one carries the book’s title and also expands on the theme with the subheading “Practicing in Prisons and Charnel Grounds”. Here, the author compares the experience of living and practicing in prison with doctrinal reasons for and benefits of practicing in charnel grounds, a main point being that both prisons and charnel grounds thrust one directly into experience of mental poisons, that is, into direct contact with greed, anger, and ignorance. The chapter begins by explaining just what is a charnel ground, and by extension what charnel grounds represent. This makes it possible to explain, in Buddhist terms, what is a charnel ground practice, both traditionally and in contemporary terms. Lastly, the reader is given a glimpse inside Fleet Maull’s prison experience, showing just how the prison conditions, both external/physical and internal/psychological, provided him with the opportunity for charnel ground practice.

Chapter two looks at Buddhist practice in prison as a form of monasticism, particularly the author’s experience of taking and applying monastic vows in prison. First we get to see that Buddhist practice in prison is very different from its counterpart in a monastery. “Noise and chaos are a prison’s most pervasive qualities” (p.41). Eventually it becomes evident that while formal practice is very difficult the practice of mindfulness throughout daily life is crucial in prison.

Chapter three, like the previous chapter, is an edited excerpt of previously published material. It addresses “Money and Livelihood Behind Bars.” Strange as it may seem there is an economy in prison. Wages can be earned and trade does occur, and there is inevitably a black market where goods and services can be bought. While it is possible to live on very little, everything about prison life and western society at large tends to ensnare us in economic gain. With his pre-incarceration livelihood coming from drug smuggling the author realized upon entering prison that it would be necessary for him to practice Right Livelihood, with its attendant honesty.

In chapter four the author considers “Death Without Dogma”. In this chapter Maull recounts his interaction with dying inmates while performing hospice work. The stories are very personal and give a real flavor of how he brought practice into his interactions with inmates of other faiths.

Chapter five speaks of the widespread phenomenon of depression. Although this problem is not specific to prison or charnel grounds, in this case prison is the framework for examining and understanding depression. And, although this is the shortest chapter of the book, the author makes quick work of explaining just how potent a steady meditation practice can be at dissolving the life-sapping darkness of depression and hopelessness.

In chapter six, “Rumblings from Inside,” we get a look at the psychology of the incarcerated. Emphasis is placed on considering the effects of penal methods (punishment vs. rehabilitation) for the inmate in terms of taking responsibility for his or her life. Negative mental states abound, and are structurally encouraged, in prison life. The author suggests that real change can come about when inmates learn to be of service to others. He also speaks of the value meditation offers in seeing inmates’ responsibility for their current conditions.

Chapter seven, “A Taste of Freedom” looks at the experience of stepping outside the role of prisoner for a three day unescorted furlough. The author has been in prison for thirteen years by the time we get to this chapter. The sudden shift to experiencing freedom outside of prison prompts the author to reflect on his years of prison conditioning, conditioning that he realizes can be met with mindfulness and emotional receptivity.

Chapter eight sees the author finally released from prison and embarking on life afterward, speaking to a Buddhist audience about “Transforming Obstacles into Path”, and explaining how he came to see that whatever difficulties encountered can be met without reactivity and used as fuel for practice. By this point in the book much of the material has been stated in prior chapters.

And lastly, chapter nine discusses the “Path of Service”. Here Fleet Maull explains how service to others in prison benefited him, allowing him to get beyond his own personal drama. He also explains how he thinks that service to others is offers healing to those still in prison. Getting out of the endless loops of our mind by helping others makes it possible to let go of our own self-perpetuated suffering. As is stated in the opening verse of the Dhammapada:

“Mind precedes all mental states. Mind is their chief; they are all mind-wrought. If with an impure mind a person speaks or acts suffering follows him like the wheel that follows the foot of the ox.”

Life in prison can easily be seen as life in hell, but as Fleet Maull illustrates it need not be so.

Priyamitra
Priyamitra was ordained into the Triratna Buddhist Order in 2005. He lives in Spokane, Washington where he was active for many years as a prison Dharma volunteer. Previously, he worked in a variety of jobs, as diverse as software-tester and hanglider test-pilot. In February and March 2009 he fulfilled a life-long ambition of going on pilgrimage in south Asia.
Read more articles by Priyamitra
: death, prison