“Fearless at Work” by Michael Carroll 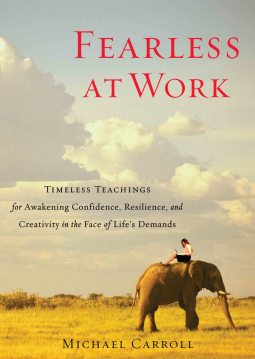 I jumped at the chance of reviewing ‘Fearless at Work’. A close workmate in my business died very suddenly before Christmas. She went to sleep one night and didn’t wake up. I miss her. My workload has temporarily doubled and I’m practising the art of muddling through, with a brain befuddled by shock and grief. So I was eagerly awaiting the arrival of ‘Fearless at Work’ in engaging with this particular phase of life.

The stated aim of this book is to draw on Buddhist philosophy and the practice of mindfulness in helping readers to become more confident and open to possibility in their work lives. Michael Carroll is the founding director of an organisation called ‘Aware at Work’, has held a number of executive positions and is a long-time student of Buddhism. In his words in the introduction, this book is about ‘sitting down and being still’ (original italics) and he refers frequently to ‘mindfulness-awareness practice’.

‘Fearless at Work’ is divided into five parts, with each themed part exploring various ‘slogans’ to reflect upon, memorize, apply the slogan at work each day and so on. Some of my favorites slogans, to give you a flavor, were: ‘Face the fierce facts of life’, ‘Lean in’, ‘Be vividly present’, ‘Where’s the edge?’ and ‘Be a spiritual fool’. Carroll points out how his development and use of slogans is inspired by the tradition ‘lojong’ or mind-training practices originating from Tibet in approximately the 12th century. In detailed appendices Carroll outlines what he calls his: ‘traditions of fearlessness’, including Kagyu-Nyingma meditative disciplines and Shambhala warrior practice.

“Distracting ourselves from a life we are afraid to live comes in many forms, some simple, some potent, some pathetic, others complex” (page 161);

Having read this book, I’m left in little doubt that Carroll is a dedicated Buddhist student and most likely a very helpful and inspiring guide to many folk going through organizational change. He is clearly very passionate about his work and how he applies what he has learned from studying and practicing the Dharma: the teachings of the Buddha, as well as a number of other spiritual practices.

Yet I find I’m disappointed. Carroll indicates early on (page 7) that the book is based on a “simple, practical gesture: sitting down and being still”. Unfortunately very little of the content and method of this book reflects this intention. Carroll refers to ‘mindfulness-awareness’ practice throughout but omits to define what he means by this in the body of book, instead only including references to ‘traditions of fearlessness’ in the appendices. The reader is given no indication in the main body of the book what Carroll personally means by and practices in relationship to ‘mindfulness-awareness’ practice.

Carroll’s pace, tone and the sheer density of the book’s content doesn’t, in my mind, conduce to the contemplative practice which he invites in the book’s introduction. Many of his 38 slogans, explored throughout the five parts of the book, are more akin to sound-bites of his own thoughts, anecdotes and examples, rather than an invitation to the reader to reflect upon their lived experience or draw very deeply on practical workplace examples.

It’s not immediately clear to me why the book is entitled ‘Fearless at Work’. Much of this content applies to life in general, rather than just life at work. The examples and anecdotes which do refer to work seem to be largely based upon work in the corporate world, so I imagine Carroll is writing with this readership in mind. I have to admit that by two-thirds of the way through the book I started to lose interest. Not because Carroll doesn’t have interesting and important things to say, but because of the slogan structure and content. The clarity with which he explains each slogan is variable and pithy to the point of sometimes not quite saying enough for me to fully understand his point. In the end the book felt more like a slogan ‘shopping list’ than an invitation to reflect on work, life and practice. In this sense, it didn’t much resemble what I know of the flavour of traditional ‘lojong’ practice, even though that was his original inspiration.

Learning each of the slogans didn’t encourage me to want to sit down and reflect on them, although I did give that a go. I didn’t find them especially potent and inspiring, as advertised on the back cover. He includes Dharmic ideas but often these are not sufficiently ‘unpacked’ to throw light on each of his slogans. On occasions I found his slogans interesting, poignant and entertaining, but not particularly conducive to contemplating fearlessness. I had one or two ‘aha’ moments, so all was not lost, but this isn’t a book I would hurry to recommend. I found one of his others — ‘The Mindful Leader: Ten Principles for Bringing Out the Best in Ourselves and Others’ — much more helpful and better-written.

In his introduction, Carroll emphasises that sitting down and being still sounds easy but is ‘exquisitely demanding’. To my mind he misses an opportunity in this book. Had he expanded some of the content of Part II ‘Taming the mind’ and a few of the other chapters from Parts III and IV — which are aimed more directly at helping readers to create the conditions for both effective meditation practice and life at work — the book would have unfolded more closely in line with his stated aim. Had there been a little less breadth and more depth with more emphasis upon meditation practice, the book would certainly have helped me with the exquisitely demanding work of being still amidst work pressures and feeling fear. As it stands, for my personal taste at least, this book has a few design faults and doesn’t touch in closely enough to the Dharma.