“Hidden Dimensions” by B. Alan Wallace 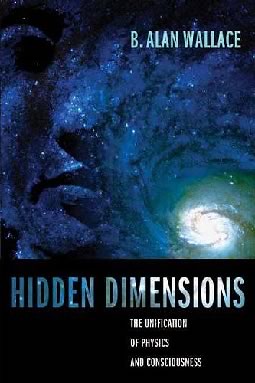 A new book by Buddhist practitioner and writer B. Alan Wallace aims to bridge the gap between the worlds of science and of spirituality, but positing an adventurous new “Special Theory of Ontological Relativity.” Reviewer William Harryman expresses ambivalence about Wallace’s bold endeavor.

I like Alan Wallace. He is one of my favorite Buddhist scholars. In fact, I recently reviewed his newest book — Mind in the Balance — very favorably. When he is talking about Buddhism, he is in his element. There are few people writing today with a better understanding of Buddhist history and tradition, especially Tibetan Buddhism, than Wallace. When he gets into the field of science, however, he is less knowledgeable, and it shows.

At the beginning of Hidden Dimensions, his 2007 book attempting to unify physics and consciousness (from a Buddhist perspective, of course), he falls immediately into one of the common errors in trying to make sense of physics, namely the idea that consciousness — human consciousness — is an essential part of the measurement problem. Quoting his “Preface” to the book, “So quantum mechanics implies that consciousness may play a crucial role in the formation and evolution of the universe as we know it” (pg. viii). He goes on to say, in the final chapter of the book:

The notion of an observer necessarily implies the presence of consciousness, without which no observation ever takes place, and … consciousness, far from being an insignificant by-product of brain activity, plays a crucial role in the formation and evolution of the universe. (109)

Aside from the fact that the universe existed quite well without human consciousness, or any consciousness, for about 14.5 billion years, the essential flaw here is that it does not require consciousness, human or otherwise, to impact the outcome of a measurement. It simply requires the act of measurement, which only requires another electron, and contrary to popular understanding, that measurement effect is fully reversible.

Despite this fundamental flaw in his thinking, this is still a useful volume, although many readers may have a hard time staying with the abstract nature of the arguments. One of his central premises is that the mind sciences need to get beyond the notion that all subjective experience is a by-product of neuro-chemical activity in the brain. This is the same argument that people such as Francisco Varela, Evan Thompson, and others have been making for years. The idea is still foreign to many neuroscientists, or simply rejected.

And this is where Buddhism has something important to contribute as he gets into some of the finer points of neuroscience. For example, the notion that

[E]verything we observe extrospectively and introspectively consists of qualia, or appearances, and they are illusory in the sense that they seem to exist either in the external world or inside our heads, whereas in reality there is no compelling evidence that they are located anywhere in physical space. (pg. 51)

It’s a basic tenet of Buddhism that if we try to take apart our perceptions of self (the five aggregates), looking for the substance behind each aspect, we will eventually discover there is no self there to look at — it’s all illusory. This is what perceptual neuroscience is also coming to terms with in recent years.

Wallace does a good job of dismantling our consensus reality with his Special Theory of Ontological Reality (chapter 5). I’m not sure I buy his conclusions here — that all mental and physical processes arise from “another dimension” that exists prior to the separation of mind and matter. His conclusion seems to rest on the work of Carl Jung and Wolfgang Pauli and their synchronicity hypothesis. I like the theory, but I also want to see some way to test it and verify it. Wallace then cites Roger Penrose and his archetypal mathematics (“independent of the existence and culture of human beings” [pg. 56]), but George Lakoff would counter that mathematics is metaphoric language and, as such, is grounded in our physical being, not in some abstract archetypal space.

Chapter six offers some intriguing experiments to test the hypothesis of an “archetypal realm of pure ideas,” many or most of which are based on early Buddhist practices that have fallen away over the last 1,500 years. Wallace is honest to admit that without prior training, and I’m guessing he means here monastic training in the Tibetan tradition, it could take 5,000 to 15,000 hours to complete his proposed experiments testing the archetypal qualities of the five basic elements (earth, water, fire, air, space). You might see why the scientific community wouldn’t support such a project. And again, I take issue with the notion of a realm of pure archetypal ideas or forms — it’s too anthropocentric to be valid on a cosmological scale.

Wallace’s next theory, A General Theory of Ontological Relativity, borrows from Einstein both in name and in spirit. He is proposing that

[T]here is no theory or mode of observation — no infallible method of inquiry, scientific or otherwise — that provides an absolute frame of reference within which to test all other perceptions or ideas. (70)

This is useful in that what he is really referring to here is the ability to take multiple perspectives (one person’s background theory may be someone else’s foreground theory”). His conclusion, in part, is that there is no way to “separate the universe we know from the information we have about it” (72). From here he brings up the idea of seeing the universe as a giant computer (a favorite — and flawed — metaphor for some physicists). He relies on information theory — all things are information — to support this metaphor. But Wallace rejects this idea and then proposes something even more anthropocentric, that the universe is a giant brain. And here he brings back my initial complaint about his book:

There is no convincing evidence that the universe is information, first of all, and secondly, if this is untrue then there is no need for a conscious being to be informed by it. The universe existed pretty well for 14.5 billion years without any conscious beings that we know about (unless you accept the idea of a “God” of some sort). It’s in this objectivity that theories such as these collapse.

Wallace then proposes another option to the measurement problem with the many worlds theory of physics. Beginning with the notion that when a measurement or an observation causes the collapse of the quantum wave function — one possible reality is split off from all the possible realities (this is known as the Copenhagen interpretation) — the many worlds hypothesis claims that the wave function collapse is a subjective experience, and that objectively, all the possible worlds continue to exist. According to Wallace, “This hypothesis raises the possibility that individuals may alter the course of events by their choices, aspirations, faith, and prayers” (83). This line of thought is very close to magical thinking. It might be more realistic to say that individuals may alter their perception of events, but not the events themselves.

The remainder of the book is equally challenging, including a chapter on the semi-annual meeting of the Dalai Lama with distinguished scientists, especially physicists, and a final chapter on the concept of symmetry in physics (the idea that there is a perfect or absolute reality — the “Great Perfection” — that exists independently of the material universe).

While Wallace is arguing for a first-person science throughout the book, he never offers the studies supporting such an approach (for example, Tibetan monks changing their brain patterns depending on the form of meditation they use) — granted, he has made those arguments in other books. But if you want to convince scientists to take up that approach, more detailed arguments in support of it might be useful. In the end, this is a short but challenging book. It requires an ability to think in abstractions, mostly because that is where Wallace is working with this book. If you can suspend your disbelief about some of these anthropocentric ideas — which I could not — then you might enjoy the ride he takes us on as readers. Or, on the other hand, you might just enjoy watching a great mind tackle some of the toughest questions about life, the mind, consciousness, and the universe.

William Harryman
William Harryman is a freelance writer, a personal trainer, nutritional coach, and integral life coach living in Tucson, Arizona. He has been a practicing Buddhist since 1998, at first sampling among many traditions before settling into the Shambhala tradition of Chogyam Trungpa Rinpoche. William blogs at Integral Options CafÃƒÂ©, and you can follow him on Twitter.
B. Alan Wallace, Dalai Lama, neuroscience of meditation, science & meditation, Steve Hagen