How to Train a Wild Elephant, by Jan Chozen Bays 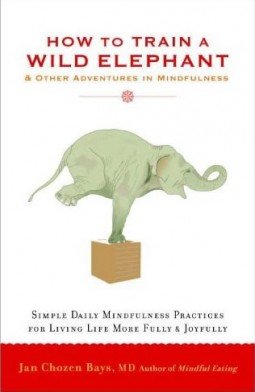 I remember that “wow” moment when I first read Thich Nhat Hanh’s now-classic The Miracle of Mindfulness, in which he outlines, very simply and with a sense of authenticity, powerful and effective methods of bringing mindfulness practice into daily life, such as washing the dishes as if they were sacred objects, and eating mindfully.

That “wow,” was uttered repeatedly, in with an even greater degree or reverence and appreciation, while I was reading How to Train a Wild Elephant, which is a worthy successor to Thich Nhat Hanh’s earlier work, taking the teaching of mindfulness practice to a new level.

I had heard of Jan Chozen Bays, mainly in the context of quotations floating around on Facebook and Twitter, but I wasn’t very aware of her as an author. That turns out not to be surprising since she hasn’t published many books: one on mindful eating and two works on the topic — obscure to many westerners — of Jizo, the Japanese Bodhisattva of children. Having read the book currently under review, I’m strongly tempted to seek out all of her previous work, for Chozen is an skilled writer and a consummate teacher.

Chozen is a Zen master in the White Plum lineage of the late Maezumi Roshi. She is also a pediatrician who specializes in the evaluation of children for abuse and neglect. She is a wife, mother and grandmother. Along with her husband, Hogen Bays, she serves as an abbot and teacher at Great Vow Zen Monastery in Oregon. How to Train a Wild Elephant is rooted in twenty years of collective practice at the monastery, and this intense, prolonged, and repeated exploration of mindfulness is what gives the book its depth.

The book contains 53 exercises (one for each week of the year and one for luck?) in mindfulness, each of which has been practiced at Great Vow repeatedly, for a week at a time, year after year. The depth of this exploration shows both in the nature of the exercises themselves, and in the reflections that Chozen brings to them. Each exercise — which Chozen says we can regard as “seeds” that can be planted in the many nooks and corners of our life in order to “grow mindfulness” — has several sections. First there is a simple description of the task, in just a few sentences or paragraphs. The tasks might involve using your non-dominant hand (exercise 1) or seeing the color blue (exercise 21), or looking deeply into food (exercise 47).

The description is followed by a section called “Reminding Yourself,” which shows how we can use notes, images, or other supportive practices in order to help remind us of the mindfulness exercise we’ve committed to doing. After all, one of the most challenging tasks in developing mindfulness is remembering to be mindful! As Chozen says, “This is the essential question of mindfulness. Why can’t I live like this all the time?” Indeed.

The next section, “Discoveries,” includes observations, insights, and common challenges of following that task — drawn both from Chozen’s own experience and from the reports of her students. It’s particularly useful to hear of people’s resistances in order to learn that you’re not alone, and to learn that these resistances can be overcome. The “Discoveries” section also frequently alludes to scientific research on the topic at hand. It’s fascinating to learn, in the section “Smile” (exercise 52), for example, that “people who smile in a wholehearted way live, on average, seven years longer than people who do not have a habit of smiling.” (A minor nit-pick: I would have loved references for these kinds of statements).

Each exercise has a “Deeper Lessons” section that explores the “themes and larger life lessons” connected to it. These are often breathtakingly profound. Here, for example, is part of the reflection from “Loving Eyes” (exercise 14):

Seeing with loving eyes is not a one-way experience, nor is it just a visual experience. When we touch something with loving eyes, we bring a certain warmth from our side, but we may also be surprised to feel warmth radiating back to us. We begin to wonder, is everything in the world made of love? And have I been blocking that out? [Emphasis added]

Whenever I am working on a tangled mind-problem, I go into the woods and sit down, leaning up against a tree. I merge my awareness with the awareness of the tree, stretching my imagination from the ends of the roots deep in the damp earth to the tips of the topmost leaves blowing about in the breeze.Then I ask for the tree’s perspective on my dilemma. It always helps.

Or from “Entering New Spaces” (exercise 17):

As we walk toward a door, our mind moves ahead to the future, toward what we will be encountering and doing on the other side. This mind movement is not obvious. It takes careful watching. It makes us go unconscious, just briefly, of what we are doing in the present. The unconscious or semiconscious mind, however, is able to steer us through the movements of opening the door and making our way safely through.

Finally, each exercise concludes with a few “Final Words,” which are pithy reminders that drive home the import of the exercise. Sometimes these are hilarious, as in this Suzuki Roshi quote that sums up an exercise on mindful speech: “I think you’re all enlightened until you open your mouths.” Often they are simple slogans that could be borne in mind as teachings: “Don’t be annoyed when you have time to wait; rejoice in extra time to practice being present.”

“How to Train a Wild Elephant” is a rich resource for anyone interested in practicing mindfulness in daily life. The exercises, although they are rooted in monastic practices, are skillfully related to the activities of ordinary life; remember that Chozen, as well as being an abbess, is a pediatrician and a mother (and anyway, let me tell you from experience that running a monastery — or in my case a retreat center — is no easy task). You’ll learn how to be more mindful in the supermarket, in the car, and while working in an office.

I have minor reservations that focus on some of the language used in the introduction. Chozen, in her prefatory essay on mindfulness, uses phrases such as “the eternal presence we call the Divine,” or “we are looking for the Divine in all appearances.” In the exercises themselves (which constitute the vast bulk of the book) this language is rare and cast in terms of being the language of other traditions (“This is called our Buddha Nature; in other religions [emphasis added] it is called our divine nature,” for example). It’s puzzling why Chozen opted to use this terminology so frequently in the introduction, especially since she never says there what she actually means by it. There are similar expressions as well that I didn’t understand: “Great Presence” for example. While I see no problem with making a nod to the language of other traditions, and thus helping non-Buddhists orient themselves in a world of perhaps unfamiliar terminology, it’s a shame to end up disorienting Buddhist readers.

This minor quibble aside (and it’s possible these questions of terminology may be changed before the book hits the shelves in July), “How to Train a Wild Elephant” is an indispensable guide for those who have been attempting to practice mindfulness in daily life and who appreciate the guidance of a master in taking them deeper.

Bodhipaksa
Bodhipaksa has been meditating since 1982 and teaching since around 1989. He is a Buddhist practitioner and teacher, a member of the Triratna Buddhist Order, and a published author. He launched the Wildmind website on November 11, 2000. Bodhipaksa has published many guided meditation CDs, guided meditation MP3s, and books. He teaches in various meditation centers around the world. He is supported by donations from members of the Wildmind community. If you're interested in becoming a supporter and in getting access to more of Bodhipaksa's teachings, please click here to learn more about his meditation initiative.
authenticity, daily activities, mindfulness, mindfulness in daily life, Rev. Jan Chozen Bays, Shambhala, Zen