“No Ordinary Apple,” by Sara Marlowe and Philip Pascuzzo 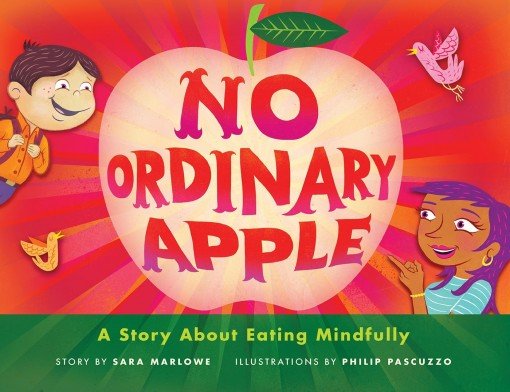 No Ordinary Apple is a variation on the famous “raisin exercise” that’s so popular in meditation classes. (If you’re not familiar with the raisin exercise it’s where we mindfully eat a single raisin, thoroughly exploring it with our senses.) But No Ordinary Apple is, of course, a children’s book — and a very welcome addition to the growing body of meditation resources for children.

The fruit is question is an apple rather than a raisin and the mindful eater of this apple is a young boy called Elliot, who is waiting at his adult neighbor Carmen’s house between school and his parents getting home.

Elliot is hungry and asks for a snack. Carmen counters with an offer of an apple: a suggestion that is none too popular with Elliot, who wants candy.

Carmen is a good saleswoman, though. Or perhaps she teaches meditation. At any rate, she persuades Elliot that this is no ordinary apple, but tells him that he’ll have to find out for himself why this is the case.

Carmen guides an excited Elliot through an exploration of the apple using all of his senses. He moves from having a stereotypical view of an apple as “red” to recognizing the many colors that it contains. He touches the apple and explores its textures. He smells it. He even listens to the “thwap” it makes as he tosses it from hand to hand. And of course he eventually bites into it, chews it, and swallows it — all the time exploring the apple mindfully.

Of course Elliot realizes that this is indeed no ordinary apple, but it has to be pointed out to him that it’s not the apple that’s special — it’s the attention that he gave to it that created a special experience. And Carmen helps him to see that anything he eats — even candy! and perhaps even food he doesn’t like — will be extra-special when eaten with mindfulness.

No Ordinary Apple is a lovely book. The illustrations are larger-thank life and they do in fact make the experience of eating an apple look special. The story is fun, and children will feel like they’re learning something rather than being preached at.

My daughter, who’s six, was very excited about the prospect of us doing this exercise together, and she even set aside some apples on top of the refrigerator, awaiting the perfect moment (the kids had to be in need of a snack, and we needed some uninterrupted time). When the right time arrived, both my kids (I also have a five-year-old son) enjoyed the exercise, although the youngest had some trouble restraining himself from eating the apple during the looking-feeling-smelling-listening stage, and once we were tasting our apples he couldn’t stop himself from swallowing it. But he had fun. My daughter, who’s almost two years older, really enjoyed the exercise and was old enough to restrain herself. Actually, when I’ve done the raisin exercise with adults there have been a few who’ve had no more discipline than my son!

Bodhipaksa
Bodhipaksa has been meditating since 1982 and teaching since around 1989. He is a Buddhist practitioner and teacher, a member of the Triratna Buddhist Order, and a published author. He launched the Wildmind website on November 11, 2000. Bodhipaksa has published many guided meditation CDs, guided meditation MP3s, and books. He teaches in various meditation centers around the world. He is supported by donations from members of the Wildmind community. If you're interested in becoming a supporter and in getting access to more of Bodhipaksa's teachings, please click here to learn more about his meditation initiative.
children's books, food, meditation books, meditation for children, meditation resources for children, mindful eating