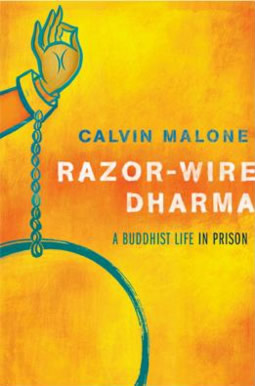 For some inmates imprisonment offers an opportunity to reflect on the causes and conditions that have shaped their lives, and a powerful incentive to bring about personal change. Calvin Malone’s first book, Razor Wire Dharma, elegantly and powerfully outlines the challenges and rewards of practicing behind bars.

Calvin Malone began practicing meditation and Buddhism soon after he entered prison — about twenty years ago. In “Razor Wire Dharma,” he gives an account of time served, of fellow prisoners, and of his attempts to practice the Buddha’s teaching in this most challenging of environments.

And challenges Calvin Malone has encountered in plenty. In a series of short and very readable chapters, he describes the difficulties inherent in prison life and, as a Buddhist, the patience, tolerance and sympathy such a life demands of him.

The regimented, and sometimes baffling, routine of life behind the wire is conveyed with insight, compassion and humour. But he never underestimates the suffering of prison existence. Nor the extent to which that suffering impinges on his Buddhist practice. He tells us, for example, that a significantly large percentage of the prison population is made up of the mentally ill, the addicted and the psychologically damaged. Given this fact, his Buddhist practice of loving kindness is challenged, on a moment to moment basis, by an “endless onslaught of hatred, indifference and anguish.” But the power of Razor-Wire Dharma consists in Malone’s ability to demonstrate that a good and ethical life can flower in such extremely difficult circumstances. Perhaps even because of the extremity of the circumstances.

Malone’s observations are always interesting and perceptive, conveyed in a deceptively simple style which often nails an aspect of prison life with precision and clarity. As in this passage, where he’s writing about the constant flow of arrivals and departures amongst the prison population:

This constant upheaval forces one to be alert to potential danger, scams, or the unexpected. If you take a risk and attempt to connect with a human being, that relationship is under constant scrutiny by those too bored to find something more productive to do. The fluidity of any prison population makes for short-lived associations. The only constant is the ticking of the clock.

Despite this, Malone manages to make some strong friendships in prison. His associations and friendships with his fellow prisoners and cellmates are described in a winning, often humorous, but always kindly way. Calvin Malone obviously values friendship and his genuine compassion and concern for others very much shines through. For me, the descriptions of the people he meets in prison are the most engaging parts of the book. Malone manages to describe their individual personalities and eccentricities very well and he sees the good in even the most difficult inmate who can, if nothing else, provide him with an incentive to practice meditation harder!

So we meet Munny, who escaped from Cambodia with his family, but who found life in America confusing and unsettling; Hacksaw, of the hacking cough and clumsy manners; Shawn, who has a horrific history of physical and psychological abuse; Derick, who has lived a life on the streets…

Some of these stories don’t end happily. Malone doesn’t sentimentalize and it’s fitting that he doesn’t just include the stories where meditation or Buddhist practice has a positive or transformative effect. But there are plenty of “transformative” stories too and they are conveyed very movingly. Particularly poignant are those episodes in which Malone, through his Buddhist practice, manages to facilitate some breakthrough in communication with another inmate, testifying both to the power of the Buddha’s teaching and Calvin Malone’s exemplification of it.

Occasionally I longed to hear the prisoners own voices a bit more. When we do hear those voices, it’s delightful. For example, we are given a description of the aggressive (and rather scary) character of “Bulldog,” who Malone invites to his little Christmas party and who, like the elephant, doesn’t forget. When Bulldog meets Malone in another prison, he gives him a crushing hug and tells Malone he now knows what “Booty-hists” (Buddhists) are…

“Santa Clauses without the suit,” he shouted, then laughed and walked out of my life.

Such snatches of dialogue add to the already authentic descriptions of the characters, but they are fairly rare. Usually Malone just reports conversations, which means such exchanges can lack vitality. He misses a chance to make his colorful descriptions of character even more colorful.

Razor-Wire Dharma will be an inspirational book for any prisoners who are trying to meditate or practice Buddhism. Indeed Calvin Malone’s approachable style could make the book accessible for anyone attempting to lead a lifestyle in prison which goes beyond mere self concern and survival.

It is also relevant for those on the other side of the wire. As the editor says in the preface, “Whether we are in prison or not, there is not much difference between us; it is more a matter of difference in degree than kind.” In this respect, “Razor-Wire Dharma” serves as more than just sensation value for those to whom prison may be a foreign experience. The extreme nature of Malone’s situation highlights what meditation and Buddhist practice is there for. For beginners to meditation and Buddhism, Calvin Malone provides practical advice and illuminating insights. For those of us who have been practicing for longer, the account of his experiences may provoke us to reflect on our Buddhist practice. To what extent is it really challenged? How would we respond to some of the situations described in the book?

Calvin Malone is a writer of integrity and insight and I sincerely hope that “Razor-Wire Dharma” attracts a wide readership in prisons – and beyond. It deserves it.

Sarvananda was born in Scotland and is a member of the Western Buddhist Order. He lives in Norwich, England.

Under the name Alastair Jessiman he is a noted writer of plays for radio, who has had many of his works produced by the BBC. His most recent production is Boxer and Doberman, a comedy police drama, which was described by the Telegraph as “funny in a wonderfully macabre way.” Sarvananda has taught meditation and Buddhism in prison.