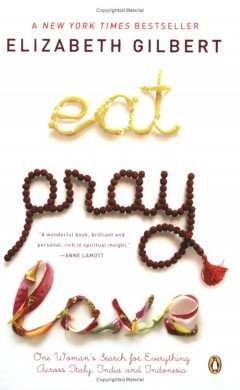 When the film Four Weddings and a Funeral came out in 1994, I was irritated by the film’s ‘token’ inclusion of a deaf character and two gay men. A lesbian friend was less judgemental. She was just thrilled that a mainstream film featured a gay relationship.

Reading Eat, Pray, Love, Elizabeth Gilbert’s best-seller, and seeing the film adaptation starring Julia Roberts, I think I know how my friend felt. The ideas are flawed, but to see Buddhism portrayed positively in popular culture is a delight.

The story – if you don’t know it – is of a thirty-something woman, unsatisfied with her affluent New York life, who goes travelling for a year in search of self-fulfilment. Her quest is successful: she stuffs herself with pizza and pasta in Italy, experiences a spiritual epiphany at an ashram in India and meets the love of her life in Indonesia. Then she writes a best selling book about the whole adventure and earns a small fortune. I came, I saw, I conquered.

And as Shakespeare’s Hamlet said, ‘aye, there’s the rub.’ Reviewers have criticised both film and book for their ‘rich girl goes shopping’ tone. Not so offensive as regards pizza and pasta perhaps, but less credible when it comes to spiritual enlightenment and finding the love of one’s life.

Besides, can the quest be genuine when Elizabeth Gilbert is doing it partly for material gain? Can it be genuine if squeezed into a twelve-month space, not to mention a book that has to have a beginning, middle and end? When we see Julia Roberts in character on the bathroom floor sobbing over how her life doesn’t fulfil her, should we be sympathising, or saying ‘get over yourself’ and saving our concern for the earthquake victims of Haiti? Furthermore, most of us aren’t able to leave hearth and home to go ‘find’ ourselves. Does that mean there’s no hope?

These questions pop up uncomfortably again and again as one reads, or watches Eat, Pray, Love, to the extent that the book (very well written) and the film (a visual feast) both become something of a guilty pleasure.

But it would be a mistake to throw the baby out with the bathwater. The film, and to a greater extent, the book, have merit.

There’s a tradition known as New Journalism, which started in the 1960’s when New York Times journalists decided that to write about something properly, you had to experience it. They went to Vietnam, lived with Hell’s Angels or shadowed rock stars for months in order to get that all-important inside view. And they wrote about their findings in the first person. The ‘I’ viewpoint entered mainstream journalism.

Elizabeth Gilbert is writing in that tradition. We may carp at the circumstance of her quest but it is courageous – she leaves the familiar behind in an attempt to open herself to experience – and as such, it’s a metaphor for all our quests. She may be writing primarily about herself, but she offers that self up as the everyman/woman self of the privileged Westerner on its relentless search for happiness. This comes over more clearly in the book than in the film, in the searing honesty of the line-by-line writing. The book is less simplistic, containing complicated episodes that the film omits. And Gilbert’s unflinching self-analysis has chimed with many readers, perhaps because she articulates Western malaise so well. We have so much: why are we still unhappy?

A friend of mine claimed recently that he’d like to read a novel that wasn’t written by a writer. He was distrusting the craft of story, with its the inevitable distortions. And yet, as Pablo Picasso said, ‘Art is the lie that tells the truth.’ We have to bear in mind that Eat, Pray, Love is essentially an art form: a story, not a description of reality.

A spiritual epiphany doesn’t happen on demand, in an ‘it’s Tuesday, so it must be enlightenment’ way. A few months meditating in an ashram and learning from spiritual teachers doesn’t guarantee anything. But it might act as a springboard. Spiritual insights do happen, and although in reality you can probably have them without leaving your own home, if we view Gilbert’s quest in the spirit of story and of metaphor, where one thing stands for another, we may be able to see her work in a more generous light.

Having said all that, the story would undoubtedly have been more interesting if she had returned home overweight, broke and having discovered that the love of her life was a serial womaniser – and still had taken it all on the chin, with equanimity. That would have been an epiphany worth witnessing.

Mandy Sutter
Mandy Sutter is a freelance writer who lives with her partner and their large black dog in Ilkley, UK. She meditates with the Leeds Triratna Buddhist Community and is a Mitra. Her debut novel, Stretching It, a comedy about a young woman's search for love, was published in July 2013 and is available on Amazon and Kindle.
Read more articles by Mandy Sutter
: books, happiness, insight, movies, relationships

Hi Mandy,
You sum up perfectly how I felt about the film (uncomfortable at the luxury of such navel gazing but at the same time recognizing the feeling of discontent despite living a privileged life in the west). What a concise, insightful critique you provide as well as interesting discussion of New journalism. And your alternative ending totally rocks.

Wow, thanks for your commment, that’s really nice to hear. I wonder if the film would have been more or less popular with a different ending? I guess we’ll never know!