“The Flowing Bridge,” by Elaine MacInnes 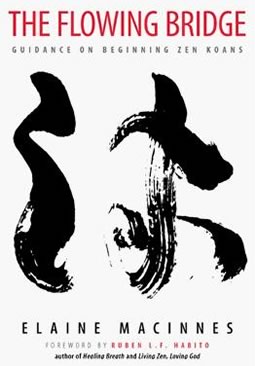 Writer Renée Miller introduces a book on Zen koans written by Elaine Miller, who is both a Catholic nun and a Zen priest.

When we step to the edge of our experience and then have the courage to take yet one more step, we are often surprised to find that the anxiety we felt at taking that “one more step” vanishes in a whole new feeling of expansion. When it comes to religious thinking, we are accustomed to holding fast to our familiar patterns of belief and tradition because what we know or have been taught feels like a protection and security for us. The religion itself may put constraints on our exploration as a way of insuring its own continuance. Yet, when we take that extra step to open up to other faiths and beliefs, we are brought into an open space where we begin to see the oneness that embraces all.

Certainly, Elaine MacInnes, a Roman Catholic nun and a Zen teacher in the lineage of Koun Yamada has found this to be true in her own life. A wise bishop once told me that only those over 75 years of age were really capable of dispensing holy wisdom to others. It takes the living of the holy life for a long period of years to bring true wisdom to fruit. Elaine MacInnes fits the bishop’s criteria. MacInnes, herself an octogenarian, has lived the life of Christianity and Buddhism for years and in her book The Flowing Bridge she dispenses the wisdom that is the fruit of faithful practice.

The Flowing Bridge is a book about koans — statements or questions which cannot be understood by rational thinking but may be accessible through intuition. The book is about the first koans that Zen students are exposed to when they begin their practice, and miscellaneous koans that MacInnes has gathered from various traditional sources — koans that were generally kept only between teacher and student. The beginning Zen disciple is exposed to koan practice because it helps unlock spiritual doors and remove phenomenal obstacles that prevent the Essential Nature from being fully experienced. The fascination with koans, however, goes way beyond the dokusan (private interview between a Zen student and the master) room. Koans make their way into cocktail parties, into Bible studies, into football game conversations. They are perceived by non-Buddhists as puzzles to be solved, conundrums to be volleyed like a ping pong ball between worthy opponents. In many ways, koans are like the paradoxes Jesus was so fond of using though it should be noted that paradoxes don’t seem nearly as captivating in the phenomenal world as koans!

Imagine, however, being given the tools with which to sample the truth nestled inside a koan, and finding there a world of infinity. Imagine it being really, just a sample, not the full meal. MacInnes does just this throughout the entire book. She takes to heart the words she quotes from the verse of Mumonkan Case 33:

If you meet a swordsman, you may present a sword.
You should not offer a poem unless you meet a poet.
When you speak to others, say only three-quarters of it.
You should never give the remaining part.

She gives what feels like a full meal, but it’s really only three-quarters of it, and at the end there is still hunger. It is not fascination with puzzle solving that she seeks to initiate. It is nothing less than the enlightenment that St. Julian of Norwich, a fourteenth-century recluse, experienced when she discovered the entire universe in a hazelnut. MacInnes begins each koan by giving a sneak peek into the koan through a story or piece of reality from the Phenomenal world. She then moves stealthily to the Essential Nature which ends up being as koan-esque as the koan itself. She is so masterful in her teaching that just when we think we’re getting a grasp on the koan — just when we think we’ve “got it!” and just when we think we don’t need to read any further because we’ve ‘got it,’ she stops us dead in our tracks with the incisive word that sounds like a relentlessly focused Zen Master. For example, when writing about the Shogen’s koan, “why is it that a man of great strength does not lift up his leg?” MacInnes comments,

“The next time you see the centipede, look well. It has already cast away its hundred legs, and Mount Mayon walks away happily — quite unaware of its legs.

Take a look. If you want to know — whether it is pure gold or not, you must look at it in the midst of fire. Burn off the legs! Or take out that two-edged sword and cut them off.”

The Flowing Bridge is not always flowing. Because it is based on Zen talks that MacInnes gave to students over a period of years, it can be choppy reading; at once obtuse, then repetitive, then tangential. At times, reading The Flowing Bridge is both an effort and a strain. Then the realization dawns — she’s painting nothing less than real life through her words. Life itself is obtuse, repetitive, tangential. We suffer because we want life to run along smoothly without effort and strain, without distortion or confusion. Only life is not like that. A student asked MacInnes if they could put off reading her teisho (Zen talk) on a particular koan until after they had discussed the koan in their dokusan interview. The student complained that the teiso was confusing. MacInnes writes, “This is the supreme compliment. Teisho are meant to confuse!

The end purpose of the book, for MacInnes, is the proper formation of the human personality which, she writes “is the removal of one’s delusions, so that one’s original nature comes to the fore.” She maintains that to be our own true Tathagata (Buddha), we must rid ourselves of false illusions. We do this, she proposes, through “sitting and allowing our Essential Nature to return to its own spontaneity.” It seems so simple, just two things — as simple as intellectualizing a koan, in order to “understand” it. Yet, it is a work of a lifetime. A work that demands our best effort and no effort at all. A work that asks of us to be right here, now.

Renee Miller
Renee Miller is an Episcopal priest, author, poet, entrepreneur and inquiring mind that wants to know. She has written extensively for www.explorefaith.org, a site for spiritual seekers, and her books, Fertile Soil in a Barren Land, and Daily Vitamins for the Soul (six volumes), are available through Amazon.
Christianity, Sister Elaine MacInnes, Zen