The Kindseat: “The ultimate in meditation hardware”

The manufacturer of a new meditation bench, the Kindseat, kindly sent me a “review copy” a few weeks ago. I’ve sat on nothing else since I received it, except when I’ve been visiting my local Dharma center, and the only reason I haven’t taken it to my local Dharma center is absent-mindedness. This is, I’m quite sure, the last meditation seat I will ever buy. It’s the ultimate in meditation hardware. 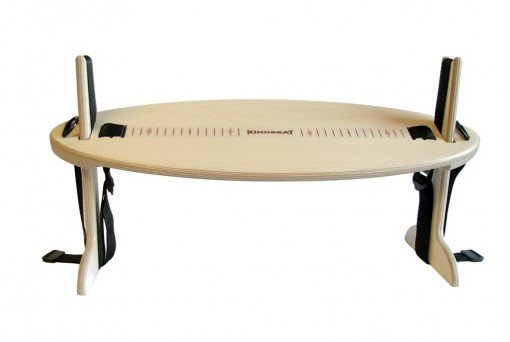 What has it replaced? It’s replacing a damn good meditation bench. My current (or, I should say, previous) bench is adjustable. It was made for me by a friend and has adjustable “feet” on the front and back, so that both the height and the angle of the seat can be altered. That was very comfortable, although it was heavy, being made of solid wood, and the rattling of the hardware was a little annoying when I was carrying it around. Fortunately I didn’t have to adjust it very often, since doing so involved using a wrench, and since the feet on the left and right had to be set to exactly the same height, otherwise the whole seat would lean fractionally to one side. I had a cushion made for my bench, which was filled with cotton batting and stayed in place due to two Velcro straps. The cushion is a bit on the thick, side, though, making the whole assemblage quite bulky when it’s being transported.

The Kindseat is much more elegant than all this. It’s nicely styled, and wouldn’t look out of place in IKEA if IKEA had a meditation supplies section. The seat is a stylish oval shape. Mine came with a nicely shaped cushion which is thin, comfortable, and stylish. One clever thing is that the cushion has a slightly sticky bottom so that it doesn’t slide off the seat. This is always a consideration, since you’re trying to keep a cushion on a sloping surface. This is a sign of a well-planned product.

The Kindseat is made of ecologically harvested plywood, which heightens its Scandinavian look (although it’s actually made in the UK). It’s surprisingly light (less than 2lb 14oz, or 1.3kg, and very strong. The legs can be removed quite easily, and so it’s very easy to throw it in a suitcase or backpack if you’re traveling. 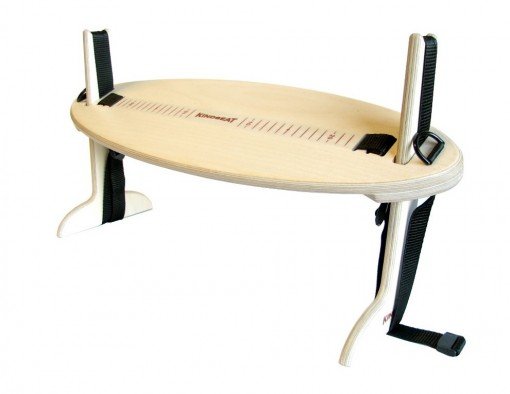 The Kindseat’s height is adjustable. No wrenches are required. The height is changed by altering the length of two loops of webbing. The term “webbing” may not be familiar to you, but it’s the kind of flat, woven nylon strap that’s used for backpacks, luggage straps, and for climbing. There’s a scale on the seat of the Kindseat that allows you to make sure that both straps are set to the same length. It only takes a couple of minutes to alter the height, and the measuring scale makes doing so a snap. It’s not the kind of thing you have to do very often, but when you’re testing out a new meditation seat you will probably have to make a few adjustments until you get it just right, and it’s wonderful to have a seat that can be adjusted so easily.

The angle is also adjustable, but you don’t even have to think about this. One of the beautiful things about the Kindseat is that the seat adjusts itself. Because the surface you sit on is suspended, it adjust automatically. Even if you shift your weight forward or backward during a meditation the angle of the seat adjusts with you. This is something you just couldn’t do with my previous meditation bench. True, there are meditation stools with rounded bottoms on the legs that adjust their angle to suit your position, but the height of those meditation benches is not adjustable. I think it’s this self-adjusting aspect of the Kindseat that makes it so comfortable.

If you’re concerned about sitting on a surface that’s suspended on straps, don’t be. There’s no sense of instability while sitting on a Kindseat. It feels both firm and responsive. The webbing, as I’ve mentioned, is a fabric which rock climbers trust their lives with. You sit on the Kindseat, and then you forget it’s there. The Kindseat really is kind to your body. 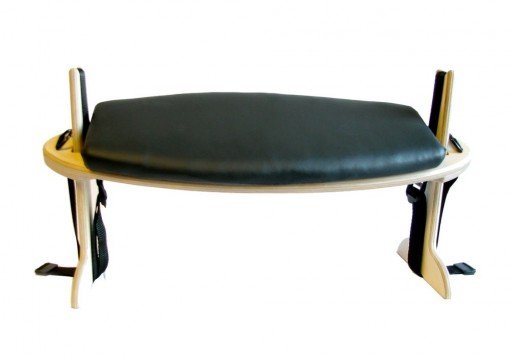 The Kindseat can be used in both a kneeling position and for sitting cross-legged. When mine arrived the height was set a little low for kneeling, but I was able to sit on it quite comfortably with my legs crossed. Now this is actually rather miraculous, since I lack flexibility in my hips and have never been able to sit cross-legged. I may explore doing that again in the future, although for now I’m sticking with the kneeling position.

The KindSeat is now available in the US, or it can be ordered directly from the manufacturer’s website. When it does arrive here (and we do plan to stock it on Wildmind’s meditation supplies store) I’m told it will cost about $120, which is around the same as, or just a little over, what many high-end meditation benches will set you back. The cushion is extra. If you think this is a lot, you won’t once you try it out. This is a meditation seat that will last you for a lifetime, and it’s worth thinking about the number of times people spend twice that amount for a cellphone that will be replaced in two or three years. You won’t be replacing the Kindseat, I’m sure.

The KindSeat now also has a carrying bag. It’s such an excellent meditation seat that I’m almost reduced to inarticulate expressions like “wow, just wow!”

[…] The Kindseat: “The ultimate in meditation hardware” […]

Hello again. Do you know if there is a weight limit for the seat? I am a bigger woman and dont want to break it or the straps to give out due to excessive weight.

I’ll check with Viramitra. He told me he’d tested the seat out to some very high weight (maybe 350lb), but I’ll get the exact figure. The straps are well-nigh unbreakable. These are what climbers use. And the plywood is also very strong. More news soon…

Sorry for the delayed reply. I only just heard back from Viramitra.

He tested the seat to 266 LB of direct weight, and there was no sign of the seat so much as moving. It’s worth bearing in mind that this is weight directly on the seat. Since much (probably half) of a person’s weight is actually going though the knees, the Kindseat should be able to take the weight, quite easily, of anyone who weighs up to 500 LB — let’s say 400 LB to leave an extra margin for safety.

Thank You Very Much, for this review. Just what was looking for.