The Mindful Manifesto, by Dr. Jonty Heaversedge and Ed Halliwell 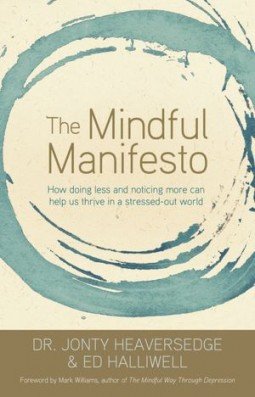 The Mindful Manifesto presents — and represents — the continuing move of mindfulness practices into the mainstream of western culture. And mainstream it is. Almost daily, news articles appear highlighting the various ways that meditation is being taken up by ordinary people living ordinary lives, and used by veterans and trauma survivors, and adapted by clinicians to treat depression, stress, obesity, behavioral disorders in children, to give just a few examples. A constant stream of scientific papers appear from researchers, investigating — and confirming — meditation’s ability to do everything from slowing cellular aging to promoting growth in the brain, to improving our sex lives.

The authors are Ed Halliwell, a writer who has contributed columns on meditation for the UK’s Guardian newspaper, and Jonty Heaversedge, who is a family doctor who also presents on medical topics on television and radio. Halliwell is the main contributor, and his writing is clear and lively.

The Mindful Manifesto is both a guide — in very accessible language — to the practice of mindfulness, and a fascinating history of how the west has come to embrace meditation. The authors state their dual intensions in saying “we’d like to invite you to learn more about mindfulness, through an exploration of its history, philosophy, science, and practice. We’d like to invite you to see how it could make a difference — in your own life, and to our stressed-out world.”

The authors say that their book is not a “manifesto” in the traditional sense of a grand plan for overhauling society, but behind that denial is a plainly visible (and quite natural) yearning for meditation to be more widely adopted. They imagine how different the world might be if politicians, for example, sat down to connect with their inner wisdom and compassion before discussions, or how healthcare might be transformed if every patient had access to meditation instruction. But there’s no concrete plan. So in what sense is this book a manifesto? The word “manifesto” is used here more in the sense of “to make manifest” or “to show plainly” (the original meaning of the word) and stands for “an invitation to let go of doing, at least for a time, and learn how to be, right now, in the present moment.” It also makes for a very catchy title.

So, how well do the authors succeed in their invitation, both to communicate how to be mindful, and to communicate meditation’s history, philosophy, and science? I think they do remarkably well in both. As a long-time practitioner of meditation (thirty years this summer) I benefited from the freshness of the Manifesto’s approach. The writers successfully translate the sometimes clunky and unappealing language of meditation (“delusion,” “attachment”) into more contemporary and accessible language (“denial, “addiction”). They take traditional Buddhist teachings, such as the Four Noble Truths and the Four Foundations of Mindfulness, and relate them to life as it’s lived in the west. This is a very approachable book.

The authors present numerous examples and case histories, showing how meditation has actually benefitted ordinary people. They in fact regularly slip into the first person to offer accounts of how meditation has helped them with their own personal difficulties. These examples will no doubt help many people to recognize that meditation can benefit people like them. The book offers clear instructions for eight meditation practices. Some of these are traditional, such as mindfulness of breathing, while others, like an ice-cube meditation and Jon Kabat-Zinn’s famous raisin experiment, are more contemporary. Of course it’s not really possible to follow detailed meditation instructions from a book, but the site for the Mindful Manifesto does offer audio downloads (for an extra fee). It would have been good if these were available in a streaming format, or if a CD had been included with the book. Practitioners who have an established practice will probably benefit more from the written guidance, because it’s easier to take on board “nuggets” and integrate them into what you already do than it is to read, digest, and remember whole paragraphs.

One omission that I think is unfortunate is that there’s no lovingkindness instruction given. It’s not that lovingkindness is absent from the book. Lovingkindness is mentioned in terms of having kindness and compassion to oneself, and is woven throughout every topic that’s considered, but it’s barely touched on in an explicit way. When it is mentioned by name, it’s in the language of “self-parenting” as a way of developing emotional security. While this language is both contemporary and very useful (thanks, guys, I’ll be stealing that phrase for use in my own teaching!) it’s very much to do with “self-metta,” which is only the first stage of lovingkindness practice. Lovingkindness techniques for enriching our connections with loved ones, developing more empathy for strangers, and overcoming antipathy — in other words the traditional format of lovingkindness meditation — would have made a valuable addition to The Mindful Manifesto.

The book is largely structured around a modified form of the Four Foundations of Mindfulness, which the authors render as mindfulness of body, mind, feelings, and life. These headings don’t really match with the traditional understandings of the satipatthanas, but practically speaking the schema works well as an instructional tool. The approach throughout these chapters is very much rooted in science, and in the clinical applications of mindfulness, so that mindfulness of the body, for example, is treated very much in terms of dealing with painful sensations in the body, using approaches made popular in Mindfulness-Based Stress Reduction. The history of the development of such approaches is woven through this material, and is, to my mind, fascinating. Although a book on practicing mindfulness technically doesn’t have to include the historical perspective, the techniques being explained are given an extra weight of authority when put in the context of their scientifically tested applications.

The section on the fourth foundation of mindfulness departs most from the traditional descriptions. Rather than “mindfulness of dhammas” (in my view best described as “a wise understanding of the workings of the mind”) Heaversedge and Halliwell discuss “mindfulness of life.” But although the treatment is non-traditional, it nevertheless performs a valuable service in showing how mindfulness, although it begins with a focus on our selves, can be applied to the way we interact with our world :”mindfulness takes us out of the limitations of self — by connecting us to a wider view, it shows us how we can fruitfully inter-relate with others.”

I found The Mindful Manifesto to be a fascinating and enriching read. While beginners to mindfulness and meditation will undoubtedly benefit from read the book, it’s probably even more valuable to the established practitioner, who will find the contemporary language to be helpful in seeing their practice with fresh eyes, and who will gain extra confidence from the reading about the many scientific studies that confirm in great detail the many ways in which meditation can help us be happier, healthier, and more engaged individuals.