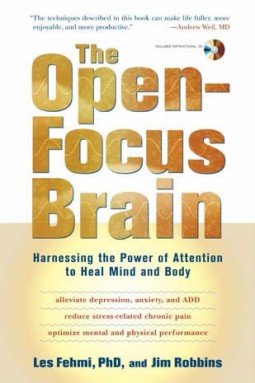 My first read of The Open-Focus Brain: Harnessing the Power of Attention to Heal Mind and Body, by Dr. Les Fehmi and Jim Robbins, generated mild interest in the science behind Dr. Fehmi’s techniques and descriptions of case studies using the techniques.

However, the night I listened to the guided exercises on the attached CD, I had one of the most relaxed, light, and blissful experiences I’ve had in the last eleven years as a serious meditator.

I was able to reach a state I’ve only accessed during long silent meditation retreats.

The Buddhist concept of emptiness came vividly alive in my body, whereas before it had been mostly an intellectual understanding. Not only do I now regularly listen to Dr. Fehmi, I’ve encouraged anyone who would listen to me to do the same!

After that experience, I immediately re-read the book with great interest and enthusiasm. Dr. Fehmi, a PhD psychologist, posits the central thesis that we are in a chronic state of stress because our attention or focus is narrow, tense, “flight or fight, with resulting mental and physical illnesses. However, when we broaden our focus to a relaxed, diffuse and creative form of attention Dr. Fehmi calls “Open Focus”, a large amount and prolonged period of phase-synchronous alpha activity is created. This means the brain is producing powerful alpha waves, which create a state of alert, wakeful relaxation. In Open Focus, alpha is created in major lobes of the brain, which “reduces stress and allows fluid communication among different regions of the brain, improving mental function effortlessly and naturally” according to Dr. Fehmi.

As a practicing Buddhist I found this book containing an interesting combination of hard science and Buddhist teachings on emptiness, mindfulness, and non-clinging. While I was reading certain parts of the book, I thought to myself that the author must be a Buddhist. He does mention that phase-synchronous alpha is the hallmark of veteran meditators and admits that he “discovered some of the Western correlates of Eastern spiritual disciplines and describes them in the language of psychology and physiology”. But that is the extent of his dharma talk. To satisfy my curiosity, I did a Google search and I found his name listed as Chinzan Les Fehmi on a roster of Zen practitioners. I’m assuming it’s the same person.

The essence of Dr. Fehmi’s technique is to create a sustained awareness of space through a series of exercises to guide people through different kinds of objectless imagery which stimulates the right side of the brain. He leads one through a series of questions that asks the listener to imagine space, volume, silence, timeless, and the five senses. For example, one exercise has the listener imaging the space between and around body regions and through them, extending limitlessly in every direction. I found this to be a brilliant exercise in manifesting the core teachings of the Heart Sutra.

How we pay attention is crucial – Dr. Fehmi argues that “attentional biases and rigidity are the principal causes of human misery and suffering”. This book provides a detailed description of the four kinds of attention (narrow, diffuse, immersed, and objective) and the most effective use of each of them. In addition, the book describes the science behind why the brain imagining space, silence and timelessness has the effect of improving memory, clearer thinking and creativity. In essence, by imaging nothing – no-thing – to grip on to, the brain is allowed to take a vacation, to re-set stress-encumbered neutral networks and return them to their original effortless flexible processing. Then overall performance is enhanced.

Dr. Fehmi encourages the reader to use these exercise anywhere, “whenever you think of it, carrying out your everyday tasks while at the same time being aware of infinite space, silence and timelessness. Be aware of the three-dimensional space between, around, and through objects. Attend to all your senses: seeing, hearing, feeling, taste, smell, mental activity and time. Include both objects and space. Imagine an awareness of space that permeates everything. Image feeling the background space against which everything is high-lighted.”

I strongly recommend this practical book. May it be a source of healing and/or happiness to you!

Akashavanda
Akashavanda has been a member of the Triratna Buddhist Order since 2008. She enjoys sharing her love for the Dharma in study groups and spiritual friendships. She lives in Eliot, Maine with her husband and silly Airedale. She has a passion for color, which manifests in quilting and gardening, and usually is wearing something lime green. After serving in the nonprofit sector for years, she now works as the general manager for a company that teaches wilderness and rescue medicine.
Read more articles by Akashavanda
: attention, brain, concentration, focus, mindfulness, neuroscience, science, Zen

I am so delighted to read your first person experience with Open Focus. I produce a monthly teleseminar for Dr. Fehmi, and in our June event there was a discussion among the experienced meditators on the call that echoed your experience.

If you’re interested, the “First Wednesday Ask Dr. Fehmi Teleseminars” are open to all, and each one features Dr. Fehmi leading an Open Focus practice, a guest speaker, and then he and Susan Shor Fehmi, MSW, answer questions from listeners. Here’s the link:
https://dissolvingpain.com/workshops/

are there still Teleseminars?

As a teacher of MBSR (mindfulness-based stress reduction) I found Dr Fehmi’s work riveting. It interests me greatly that one can, through exercises of imagining space, find a shortcut to the alpha brainwaves, or the presence, or the natural state, whichever the orientation one belongs to. By the way, I found Les Fehmi’s work mentioned in a French philosopher and meditator’s book, La pratique de la méditation, by Fabrice Midal.

[…] trying to repeat the guided meditation on the Open-Focus Brain […]

I just completed my first exercise and WOW!

Les Fehmi’s work turned out to be a stepping stone to something deeper for me: Time, Space and Knowledge by Tarthang Tulku. Hayward Fox in the Tucson area is an excellent teacher if you’re interested in checking it out.

You wrote this post on 2011. What your conclusion after 8 years towards Open Focus? Did you still practice the exercise or do you found something better?