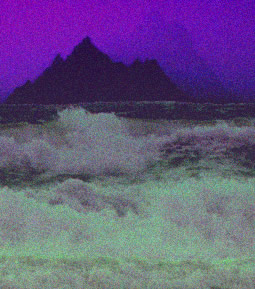 On the Irish isle of Skellig Michael, Celtic Monks once pursued a tough life of meditation. Kulananda (Michael Chaskalson) feels a connection across the centuries with these vanished contemplatives, and senses a continuity between his own efforts and theirs.

I am traveling about the Kerry coast with the team that runs the Dublin Meditation Center. As the Center’s president, I visit from time to time, helping out where I can. We are getting to know one another better, getting to know Ireland together, adventuring around its glorious coastline on a kind of pilgrimage.

One evening we set out in search of a place to hold an impromptu meeting: three members of the Western Buddhist Order meeting to discuss our practice and our work. We find a quiet cove and start along a “mass path” to an old “mass rock,” where outdoor mass was said in the absence of a church during the time of the Penal Laws that suppressed Catholic church services.

Thirteen monks, living a life of prayer and contemplation in their tiny, round, rock-built huts 600 sheer feet above the rolling north Atlantic.

It is a golden evening, the sun setting softly pink into the still ocean as we scramble over rocks and through purple rhododendron glades. Rounding a corner, the two Skellig islands suddenly appear before us, like huge Gothic cathedrals, floating in yellow light upon a gilded sea, an eruption from another dimension.

Some time in the sixth century a small band of monks headed out into the Atlantic Ocean off the south-west coast of Ireland in a hide-covered coracle. Their destination was a peaked rocky outcrop, seven miles out to sea. Battered by the deep Atlantic waves, somehow they negotiated a landing against the island’s steep face of crumbling sandstone. They had come to stay here, a day’s perilous journey from the mainland, on a barren, storm-battered rock at the edge of civilization on the western-most tip of Europe. On their horizon the sun set over the very end of the world.

Thirteen monks, living a life of prayer and contemplation in their tiny, round, rock-built huts 600 sheer feet above the rolling north Atlantic. Unbelievably, a small community flourished on that rock for six centuries. They fished, kept a tiny garden and maybe an animal or two. On the southern pinnacle, above a chimney of rock, a solitary hermit once passed his days in complete isolation.

…when most of western Europe was plunged into darkness and illiteracy, the Irish Celtic monks preserved classical learning…

Skeilic means “rock” in Irish. and there are two Skellig Islands. Little Skellig is an uninhabited haven of seabirds; a mile and a half away is Skellig Michael, dedicated, like so many high places, to the archangel of that name. It is barren pinnacle of rock, less than half a mile long and nowhere more than 500 feet wide. It rises steeply to a peak 700 feet above the ocean.

Six centuries. Despite, cruel winter weather, despite the scarcity of food and fuel, for 600 years a monastic community clung to that rock. And ever since has been a place of pilgrimage, a place of awe.

A romantic picture perhaps, but here in the west of Ireland the mind turns naturally to romance — it’s in the air, in the radiance of the light, the greenness of the land. Awestruck, we stand and quietly stare, new Buddhists on an old mass of rock, bringing a new religion to a country where an old one was once so hampered; gazing at an illuminated haven of timeless contemplation.

The next day dawns gray and wet, and there is only just time to buy ourselves green plastic rain capes before heading off to join our boat. “You’ll not be needing those today, boys,” says the boatman, seemingly oblivious to the squalling rain. But as we approach the islands the sky clears, the wind drops, and we circle Little Skellig on a clear, calm sea.

Little Skellig is home to one of the world’s largest colonies of gannets. They jostle for space and fleck the rocks white. There soar flocks of razor bills, guillemots, fulmars, kittiwakes: a multitude of seabirds. Seals bask in small inlets, and there I caught my first sight of a puffin: a childhood wish at last fulfilled.

The smallness of the buildings is accentuated by the vastness of the space all around. Man, on this rock, is but a little thing.

Landing on Skellig Michael, we climb an ancient rock-cut stairway. A thin layer of soil clings to gray, lichenous rock. Sea campion, plantago, scurvy grass: a few plant species scrabble out a desperate living. A sign put up by the Office of Public Works urges us to take care of the flora, not to throw stones, and to respect the “spiritual atmosphere” of the place

The monastic enclosure sits on a flat terrace at the edge of a 600-foot cliff. The windowless huts are shaped like beehive domes and are roughly rectangular inside, none more than 15 feet by 12. The smallness of the buildings is accentuated by the vastness of the space all around. Man, on this rock, is but a little thing. There are altars, prayer stations, and a few Celtic crosses — everything starkly laid out against a brilliant Atlantic sky.

There are no springs on Skellig Michael; rainwater, as well as dew and condensed mist from the rocks, was gathered in cisterns. And since there is nothing to burn, there can have been few fires, and little cooking. The monks must have lived on a few vegetables, grain from the mainland, wind-dried fish and raw seabirds’ eggs in season. Through the wet, freezing winter their rough woolen garments can rarely have been dry. This was no easy life.

As my friends and I crowd into a tiny drystone cell, the silence settles and a sense of awe arises. We know why those monks came there, 14 centuries ago. In our own ways we know that same yearning, the desire for peace and solitude that moves all meditators.

This is expressed by the Buddhist poet Shantideva, writing in India maybe 100 years after the founding of Skellig monastery

… one should recoil from sensual desires and cultivate delight in solitude, in tranquil woodlands empty of contention and strife.

On delightful rock surfaces cooled by the sandal balm of the moon’s rays, stretching wide as palaces, the fortunate pace, fanned by the silent, gentle forest breezes, as they contemplate for the well-being of others.

Bound to none, one enjoys that happiness and contentment which even for a king is hard to find.

During the sixth century, when most of western Europe was plunged into darkness and illiteracy, the Irish Celtic monks preserved classical learning in a project of voracious bibliophilia. Not only the Gospels, but Aristotle, Euripedes, Virgil, Ovid. Whatever they could find they copied, preserved and returned to the rest of Europe. The debt we owe them is immense. But I don’t see these Skellig monks as scribes. We know very little about them but surely they were contemplatives, upholding the more inward dimension of the Celtic Christian tradition.

I am humbled by the commitment of those monks, by their single-minded devotion to the contemplative life

On the saddle of the island, with the blue sky all around us and the myriad-colored Atlantic rolling beneath, I sit talking with a friend. Discussing his meditation practice and thoughts about life, I feel a strong resonance come upon me. Yes — this is it. It rolls on and on. The same searching, the same fundamental quest. The Skellig monks practiced for the sake of the life to come, for the glories in heaven. Shantideva, like all Buddhists, taught practice for the sake of radical change here and now. But for all their differences, they share a profound commitment to spiritual effort, a deep dedication to the inner life.

On the boat back to the mainland a still solemnity steals over me. As a western Buddhist in western Europe, it is not often that I experience a sense of continuity between my efforts and those of the ancients. I felt it once on the Acropolis and something like it, from a different dimension, in Florence. But on Skellig Michael the feeling is much more immediate. For six long centuries that barren rock was dedicated to contemplation. So our journey there seems fitting, for although we are bringing something new to that land, something clear and not heard before, it distantly resonates with something very old, and long buried. I feel it welcoming us back.

With that feeling comes humility and awe. I am humbled by the commitment of those monks, by their single-minded devotion to the contemplative life, which led them to live far out in the wild North Atlantic. That level of dedication is something to aspire to.

But omens abound on Skellig Michael and solemnity doesn’t last. As I emerge from my reverie, a school of dolphins surfaces around the boat. Leaping and diving, they are joyfully at home in their own true element, out here in the wild Atlantic Ocean.

Michael Chaskalson (also known as Kulananda) is a leading teacher of mindfulness-based approaches to work and healthcare, training senior executives, executive coaches, clinical psychologists and others in this radical approach to creativity and personal effectiveness. With Dominic Houlder he is the author of Mindfulness and Money and has written several books on Buddhist themes. See www.mbsr.co.uk for more information.

Hi Kulananda, I read your article about Skellig with interest. Have always wondered what the story behind a couple of rocks in the Atlantic was, as result of hearing a song by Clannad called ‘Skellig.’ I appreciated the way you tied history, natural history, Buddhism and Christianity together into a lovely descriptive, atmospheric bundle. It’s made me want to go there. There’s something special about extreme places like Skellig (I love Cape St Vincent (competing for the most westerly point in Europe!) for the same sorts of reasons that you like Skellig, I think.

At this moment
I am silent

God be with those
To whom
Complex poem
Is no hardship.