A stroke of insight 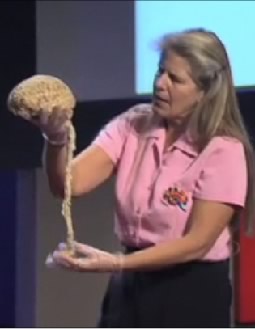 Jill Bolte Taylor was suddenly struck by an awareness of a deep connectedness with the world, a profound spiritual realization that her body blended with the world around her, that she was a being composed of energy, connected to other beings composed of energy. “The energy of my spirit seemed to flow like a great whale gliding through a sea of silent euphoria,” she later wrote.

And this all happened because of a stroke.

Taylor was well-placed to observe the changes taking place in her brain as a blood-vessel ruptured in her left cerebral hemisphere, because she was a neuroscientist working at Harvard’s brain research center. Her first thought upon realizing that she was having a stroke was “Cool! How many brain scientists get to study a stroke from the inside?”

Taylor has written in a book, “My Stroke of Insight,” and spoken at a TED conference (see video) about her experiences.

She explains in the video how the brain is split into two hemispheres, and how each has a different personality. The right brain thinks visually and kinesthetically, and sees connections. It creates empathy and and creativity. The left brain sees details, and details about those details. It thinks in words. It creates the sense of ego and separateness.

On the morning of her stroke, Taylor’s left-brain was knocked out of action by a blood-clot the size of a golf ball. She lost the ability to speak, read, to use a telephone, or to recognize faces. At the same time she stepped into the right brain world of connectedness and empathy.

Fortunately for Taylor, her left hemisphere was not permanently destroyed, and over the course of eight years she made a complete recovery.

Today, she says, she is a new person, one who “can step into the consciousness of my right hemisphere” on command and be “one with all that is.”

To Taylor, the experiences which she had, and which she can still have at any moment, are not mystical or supernatural, but are natural and part of the potential experience of each person.

This assessment rings true for practitioners of Buddhist meditation, who recognize that through their practice they are not exploring exotic realms or religion but are connecting with a different way of experiencing — a way of experiencing that is inherent to the mind and the brain’s capacities.

Taylor is of great interest to both meditators and scientists, although often in different ways. Meditators are excited to hear of a scientist who has shared their experiences and who can articulate in scientific terms how those experiences arise. Scientists tend to be more wary of anything that leads to “mystical” experiences, and can be suspicious that Taylor may be “losing it,” as a former colleague of hers put it.

Taylor has changed as a result of her experiences. She no longer experiments on live animals, since she now has a greater sense of empathy. And she’s keen to spread her message: “I believe that the more time we spend choosing to run the deep inner peace circuitry of our right hemispheres, the more peace we will project into the world, and the more peaceful our planet will be.”

Being an artist, poet, kinesthetic and aspiring contemplative, I now understand why I hate making phonecalls,
often fail to recognise people and have trouble expressing myself verbally – and get migraine in the left hemisphere!

Hello, this is Barbara Bright, back on february 02, 2004 I had a massive right-brain stroke. I am doing a buddhist’s meditation as a way of living. First couple of weeks is the breathing treatment breath normally in and out, eyes close, come on you do it everyday, he exact same thing, only one acception, count from 1-10 for 1 10 for 2 etc. A

I remember having out of body episodes when I was 6 and later on experianced powerful wave episodes as I meditated. Throgh my 50’s I kinda moved away from meditation but always in some sense or the other practiced. When I was 62 I experianced I had back to back strokes cerabellum (sp?) and for about 1 month experianced very severe disorientation and laterial thinking problems. I had to once again remember who I was through meditation, 6 month later I have some nerve problems ie skin and right knee problems but as I connect with them they are receding. I have a number of physical therapist in the family and they say I’m just not right in the head…..I agree !