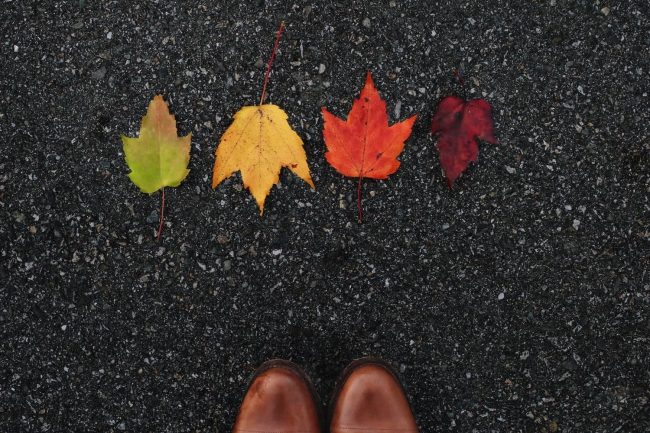 Would you like to see the world in a new way? A way that’s more authentic and satisfying? A way that taps into your infinite potential and helps others to realize theirs?

Eirik Solheim has put together an impressive time-lapse movie of a woodland scene that compresses an entire year into 40 seconds of footage. This kind of presentation helps us to see the world in a different, and in some respects more real, way.

The human mind and senses are not good at perceiving change. You look at a cloud once, and then again ten minutes later, and you think it’s the same cloud. Actually the entire shape and size of the cloud may have changed, but you simply don’t notice.

There are of course much more dramatic examples of this phenomenon, which is called “change blindness.” This YouTube link wil show you that 75% of people don’t notice when in the middle of a conversation the person they are talking to is replaced with a completely different person. And this second link will give you a chance to see how hard it is to observe change happening right in front of your eyes.

Now check out the Solheim video and see what change looks like sped up.

When watching the sped-up version of reality the mind becomes focused on the change that we usually tend not to notice because it’s happening on too slow a timescale for us to register or because we simply don’t pay attention.

I love this kind of presentation of reality and often find myself looking at the world (in my imagination, of course) in this way. The Six Element Practice, for example, is an insight meditation practice in which we reflect on impermanence and interconnectedness. We become aware of the body — not just those parts we can directly sense but the whole physical body as perceived in the imagination, right down to the internal organs and bone marrow — and sense each of the elements in turn: earth (solid matter), water (anything liquid), fire (the energy of metabolism), air (anything gaseous), space (the form that the physical elements take), and the consciousness that perceives those other elements.

In the case of the four physical elements of earth, water, fire and air, we not only notice the element within the body but we imaginatively connect with it in the outside world, reflecting that all the elements within the body come from outside. Not only do they come from outside, but they are in the process — right now — of returning to the outside world. The “self” is not a thing but a flow. In our imagination we actually see all this happening. When contemplating the earth element, for example, we see crops growing from the soil, we see those crops flowing into factories and stores, and into our bodies, and then back into the outside world as we defecate, shed skin cells and hair, and as we burn glucose in our cells. I see all this happening in a sped-up, compressed form, rather as in Eirik Solheim’s beautiful video. The body is no longer a static thing but is a fluid process.

On one arts retreat I was co-leading (I taught the meditation, someone else was teaching the arty stuff) we were asked to go and connect with the landscape, and to choose one object that we could bring inside that expressed that connection. The retreat was in a beautiful glen in the Scottish highlands, and I stood on a spit of land where a river flowed into the loch (the very spit you see below). I found myself seeing the land as it once was, covered in a sheets of ice thousands of feet thick. I saw the ice melting, the loch forming surrounded by rock scraped bare, the flowing river dumping gravel and rocks, inch by inch building the very spit I was standing on as stones fell out of the flow and were deposited in a spreading fan. I saw trees rise and fall in the blink of an eye, wave after wave of them. I watched changes of ten millennia unfold before me in the space of a minute or two, until we reached the present moment in which I stood.

We’re often confined by the senses that we have. To us five minutes can seem like a long time. To a mountain a thousand years is a brief moment. Its only in our imaginations that we can perceive the world on different timescales, and come to see that the events of our lives are just flickers on a screen. Using our imagination in this way can reveal things in their impermanence, which means that we’re seeing them in a truer way than we usually do, where we fail to appreciate the reality of change.

In the Six Element Practice we free ourselves from the prison of our limited senses. We look at the body and we see a clear demarcation between self and other. Our skin marks the boundary between what’s inner and what’s outer. Yet in the practice we see that what’s “us” is made entirely of stuff that’s not us, and that this borrowed stuff is merely passing through. To realize that is to get much closer to reality.

Imagination allows us, as Blake put it:

To see a World in a Grain of Sand
And a Heaven in a Wild Flower,
Hold Infinity in the palm of your hand
And Eternity in an hour.

Seeing all beings as Buddhas

We tend to see ourselves as “things” — as relatively unchanging entities. We see others the same way. Sometimes as part of my practice I remind myself of the immense change that a person can go through by repeating a phrase from a Zen poem: “All beings are, from the very beginning, Buddhas.” I take that like in this instance to indicate that even if someone is acting in a way that I don’t like and that I label as cruel or stupid, that person has the capacity to be a Buddha. If I relate to that person purely on the basis of who he or she is right now, I won’t encourage the emergence of their potential Buddhahood.

Relating to someone on the basis of how we see them right now is like seeing Solheim’s video reduced to a single frame. It’s a static way of seeing things. We’re disconnected from the reality of change. But imagine if we could consistently see that person not as a thing but as a process — if you could, at least in our imaginations — see that person evolving towards wisdom and compassion. How might that change both them and us?

When I manage to relate to another person as a potential Buddha — as a changing, evolving being who has the capacity for wisdom and compassion, I’m more likely to relate to them in a way that helps them grow into their potential. And I think it helps me grow into my own potential as well.

Bodhipaksa
Bodhipaksa has been meditating since 1982 and teaching since around 1989. He is a Buddhist practitioner and teacher, a member of the Triratna Buddhist Order, and a published author. He launched the Wildmind website on November 11, 2000. Bodhipaksa has published many guided meditation CDs, guided meditation MP3s, and books. He teaches in various meditation centers around the world. He is supported by donations from members of the Wildmind community. If you're interested in becoming a supporter and in getting access to more of Bodhipaksa's teachings, please click here to learn more about his meditation initiative.
anicca (impermanence), insight, interconnectedness, nature, six elements