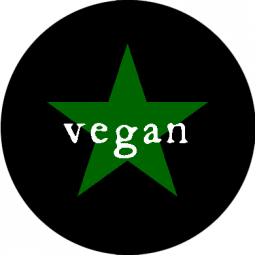 I’ve been a vegetarian for over 30 years now, ever since I visited a slaughterhouse as part of my veterinary studies and saw an animal being slaughtered. I didn’t consciously decide to become vegetarian. It was as if the decision was made for me, deep down, and I just had to go along with it. And in 30 years I’ve never once been tempted to lapse.

And I’ve tried being vegan several times, sometimes lasting for a few years. It’s a natural and logical extension of vegetarianism. Really, there isn’t a lot of different between eating eggs and eating a chicken. In both cases a chicken dies, but in one case the chicken lays lots of eggs first. But I’ve found it harder to sustain.

There was the usual tussle between ethics on the one hand, and convenience and laziness and craving on the other. So ethics was outnumbered.

Anyway, we were discussing the Buddhist first precept (not causing harm) in an online Dharma study group that I lead, and mentioned my unease about eating eggs and dairy, and my faltering desire to be vegan again. Someone in the groups connected veganism with my “getting myself on the cushion mantra.” This is an affirmation that I’ve been using to make sure I meditate every day: “I meditate every day; it’s what I do; it’s just part of who I am.” This has really worked for me. And when someone connected that mantra with veganism, I realized I had the tool I needed to give ethics the upper hand over the other three.

So this Wednesday, the day after the study group, was the first day I had an opportunity to put my vegan “mantra” into practice. It went well until dinnertime, when I discovered that some cornbread that my six-year-old daughter had made (all by herself!) contained an egg. It was my bad: I hadn’t had a chance to talk to my wife about the vegan thing. So I’m counting that as Day Zero:

Day One went well. I’d talked to my wife — who also wants to be vegan — and since I was cooking that evening there were no problems anyway. When I was our for a coffee with a friend, I became aware that my local cafe has nothing vegetarian (apart from oatmeal!) but I’ve suggested to them that they make a vegan carrot cake. And an online friend suggested that I carry around snacks. He takes some emergency Clif Bars with him for times he can’t get a vegan snack.

So it’s been sinking in that this is just what I do now, and from now on. There will be slips. My father-in-law invites us round for dinner from time to time, and his culinary skills are very limited. Basically he can make pizza. So every couple of months I’ll have some pizza. I’m not going to ask him to change his ways. In the past that’s tripped me up, because I’ve gotten caught up in all-or-nothing thinking, where I’ll regard eating Lou’s pizza as me having crossed back from veganism to non-veganism, and then I think there’s no point carrying on with it. I’m not going to do that this time.

For protein this week, in the three meals I’ll be cooking at home, I’ll be having tofu, seitan, and tempeh. I’ve also ordered a book, Artisan Vegan Cheese, by Miyoko Schinner. I’m looking forward to trying it out.

Anyway, this is the start of Day Two. Going public about this will help me stay on track, as will counting the days (although don’t worry — I’m not going to do a daily post on the subject).

I’m looking forward to my first anniversary as a vegan!

Bodhipaksa
Bodhipaksa has been meditating since 1982 and teaching since around 1989. He is a Buddhist practitioner and teacher, a member of the Triratna Buddhist Order, and a published author. He launched the Wildmind website on November 11, 2000. Bodhipaksa has published many guided meditation CDs, guided meditation MP3s, and books. He teaches in various meditation centers around the world. He is supported by donations from members of the Wildmind community. If you're interested in becoming a supporter and in getting access to more of Bodhipaksa's teachings, please click here to learn more about his meditation initiative.
ethics, five precepts, food, pets, animals & meditation, veganism