“Buddha Bob” and his beauteous beads 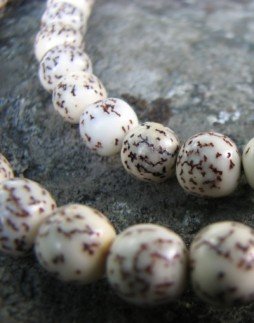 For six years, I’ve been traveling up to the state prison for men in Concord New Hampshire, where I help, with other volunteers, to run a meditation and Buddhist study group. It’s one of the most rewarding things I’ve ever done, and every visitor from outside the walls who has ever visited the group has come away feeling inspired. Our inmate practitioners live in very challenging circumstances, and meditation is their lifeline to sanity — therefore they practice with an intensity that puts many Buddhists “on the outside” to shame.

One of our inmates, Bob, makes malas — the Buddhist rosaries that people use when chanting mantras — and we’ve started selling them on our little online store.

Bob is going to be released in a few months time. Being a former inmate makes life harder in many ways. It’s harder to get a job. It’s harder to get a place to live. It’s hard even to get a driver’s license. And there’s very little support given by the Department of Corrections — basically you’re out the door in the clothes you arrived in, without even the money for a bus into town.

I want to help Bob get on his feet, which is why we’re selling his malas. And I’m asking you if you’ll pitch in. By buying one of Bob’s malas you’ll help him build up a small cushion so that he can pay rent and cover his bills in those crucial first months after his release. He’s a good guy. He’s kind: he volunteers in the prison hospice, supporting inmates who die inside the walls. He’s calm and collected: the staff used to call him “Buddha Bob.” He’s courageous as well: he’s very open about the difficulties he’s faced in his life as well as the problems he used to cause for others (and his regrets about the things he did). He’s changed a huge amount as a result of hs Buddhist practice. You’d be supporting a good man. He has my trust, and if you don’t trust me on that then, well, why are you bothering to read my blog?

Supporting Bob by buying one of his malas isn’t exactly a great sacrifice, either. These malas are gorgeous — much lovelier than the photographs can possibly convey. They’re made with love. You’d have a well-crafted and beautiful item that you’ll appreciate for many years. Or you’ll have a wonderful gift that will make someone very happy. Everyone wins.

Take a look at Bob’s malas. I think you’ll like them.

Bodhipaksa is a Buddhist practitioner, writer, and teacher, and is also the founder of Wildmind. His new book, Living as a River, will be published by Sounds True in October, 2010.

As well as teaching behind bars, Bodhipaksa also conducts classes at Aryaloka Buddhist Center in Newmarket, New Hampshire. He muses, rants, and shares random aspects of his life on his blog at bodhipaksa.com. You can follow Bodhipaksa on Twitter or join him on Facebook.

Update: [June 10] I talked to Bob today and he was very touched that people are taking an interest in his malas. And thanks to everyone who has purchased one so far — this will help Bob very much when he’s released from prison.

I attempted to order the salwag seed mala, but it was not available. I’d like to order it. Thanks.

We only have one left, but you should be able to purchase it. Was there any specific error message you were getting? Here’s the link, by the way:
https://shop.wildmind.org/product.php?productid=300&cat=47&page=1

I got one and love it for its beauty, feel and meaning. I love the idea of a kind of personal connection with its maker. I send him a moment of metta every time I chant mantra (which is what I use my mala for).

Bob really is a lovely guy — very thoughtful, kind, and generous with his time (he’s a stalwart in the prison hospice). He’s a man who’s learned a lot about himself through rigorous self-examination and through owning up to the hurt he caused others in the past. He’ll be touched to hear that you’re sending him metta.

[…] We’ve recently added some new items to our online meditation supplies store. Much of what we sell would make great Christmas presents, and if you’d like to support the work we do in promoting meditation, please consider making a purchase. (If you wonder why we sell things at all, you can read our previous post, “Compassionate Commerce,” or read about “Buddha Bob” and his beauteous beads). […]