“Buddha Bob”: turning his life around, one bead at a time 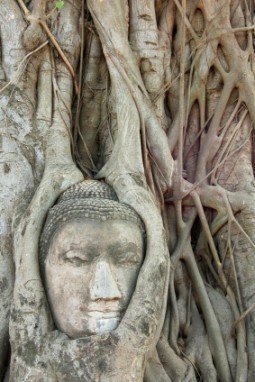 One of the most frustrating things in my life is that for the last few months, because of a change in my wife’s work schedule, I haven’t been able to get up to the prison I’ve been teaching in for the last seven years. I miss the guys there. I regard them as part of my “sangha” (spiritual community). I have great respect for them as spiritual practitioners because of the sheer effort they have to make in order to remain sane and balanced in a very challenging environment. Not only do they stay sane and balanced, but some of them bring about huge changes in their lives. I regard many of them as friends.

One of my inmate friends is a man who picked up the nickname “Buddha Bob.” He didn’t get the name from his fellow Buddhists, of course, but from other inmates who were in a therapy group he attended. Maybe they called him that because he has a strong philosophical streak, or because he has a bald head, or because he has a quiet, friendly bearing, or because he’s very stoic and puts up with periodic depression with great dignity.

Perhaps it’s because he’s very compassionate and spends a lot of time with inmates who are dying in the prison hospice. Perhaps it’s because he’s so reflective, and because he’s taken full responsibility for the suffering he’s caused, has made amends with the people he’s hurt, and has uprooted the poisoned vines of his own suffering, which drove him to hurt others in the first place. He’s done a lot of work on himself. Maybe he got the nickname simply because of his Buddhist practice, although I think the name stuck before any of that entered his life.

I like Buddha Bob a lot. I performed his daughter’s wedding ceremony, because she wanted me to stand in for him. I was touched and honored by her request, and I value feeling connected to Bob’s family.

Buddha Bob is going to be released soon. It’s a hard thing to go from prison to the outside world. No money, no job, no place to stay, no job history, no ID, no drivers’ license. And having to deal with people’s suspicion about a former felon. Often the only places you can find to stay charge extortionate rest because they know it’s so hard for a former inmate to get lodgings.

I want to help Buddha Bob get on his feet when he’s set free. He’s been making Buddhist malas — you know, those strings of 108 beads that you see wrapped around people’s wrists or draped around their necks, or hanging from one hand as they count mantras. And we’ve been selling them for him on Wildmind’s online store so that he can save up a bit of money to pay a deposit and first month’s rent, and so that he can cover his basic living expenses as he finds his feet.

Bobs’ malas are really lovely. I’d ask you to seriously consider buying one. You may not be a Buddhist yourself, but you’d be doing a fellow human being a good turn, and you’d have a beautiful object to look at and touch. You may be a Buddhist and already have a mala; well, think of this as an upgrade or as a potential gift.

Generosity is a valuable spiritual practice. When we give, we recognize that ultimately we don’t own anything, and that there’s no one to do any owning. Giving helps to loosen up the tight knot of self by means of which we see ourselves as separate and isolated from the wider world. We feel good when we give, because when we are generous we’re more in touch with the impermanent, flowing nature of the world. Everything flows, nothing stays still.

Just click on any of the images below to be taken to our online store. 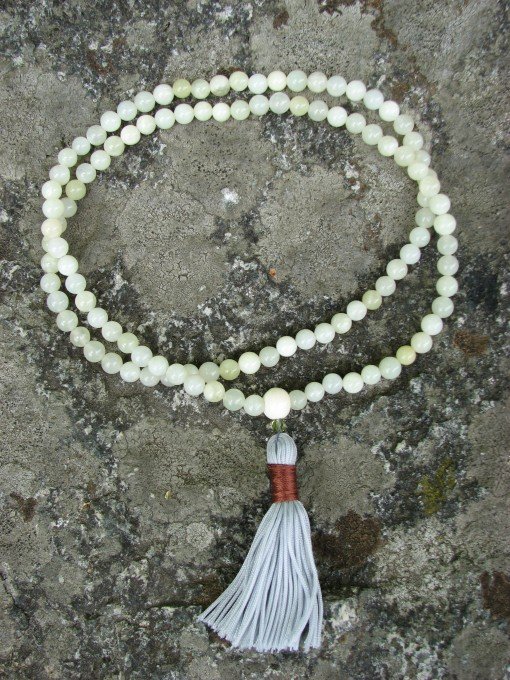 New jade mala. Only one in stock! 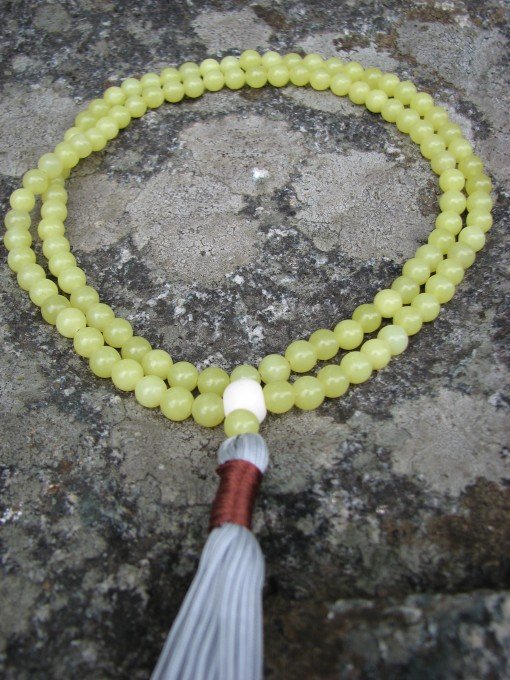 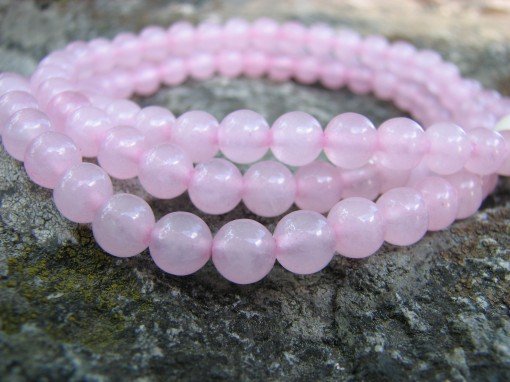 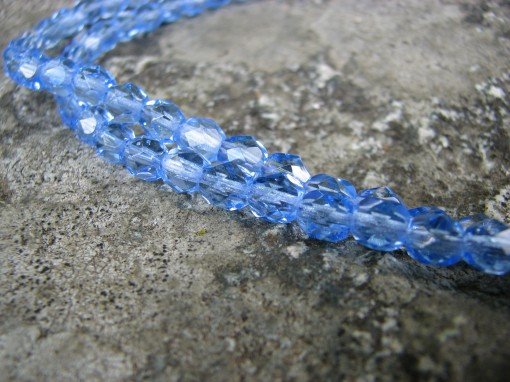 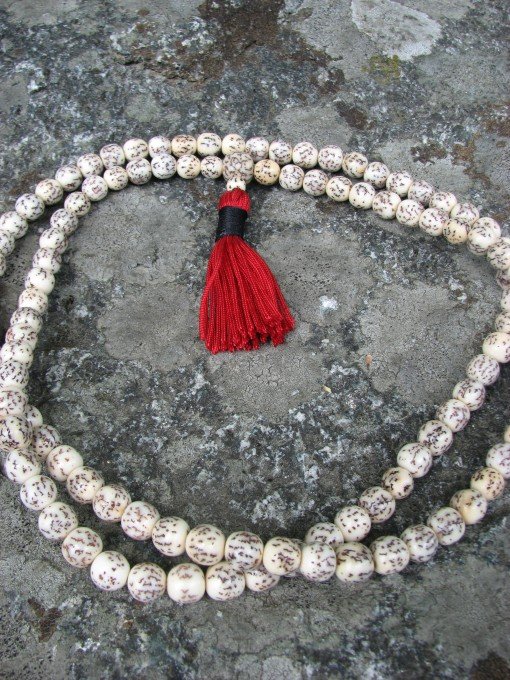 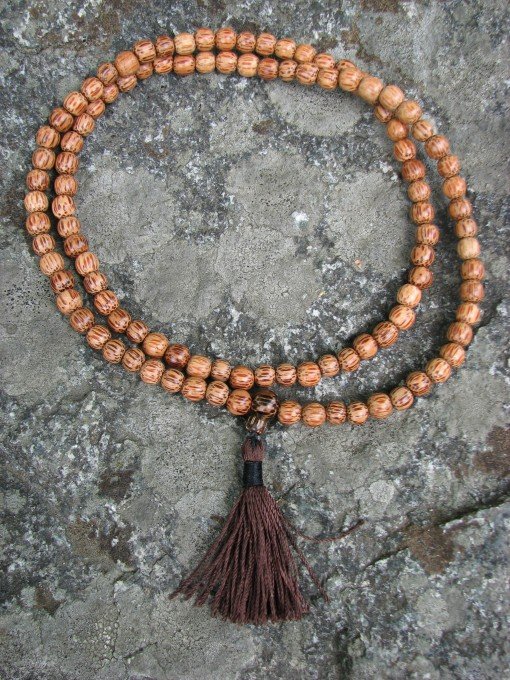 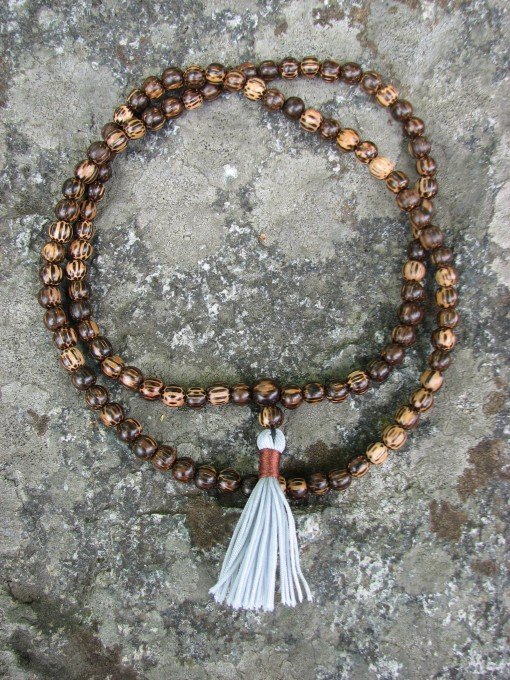 Old palmwood mala. One in stock. 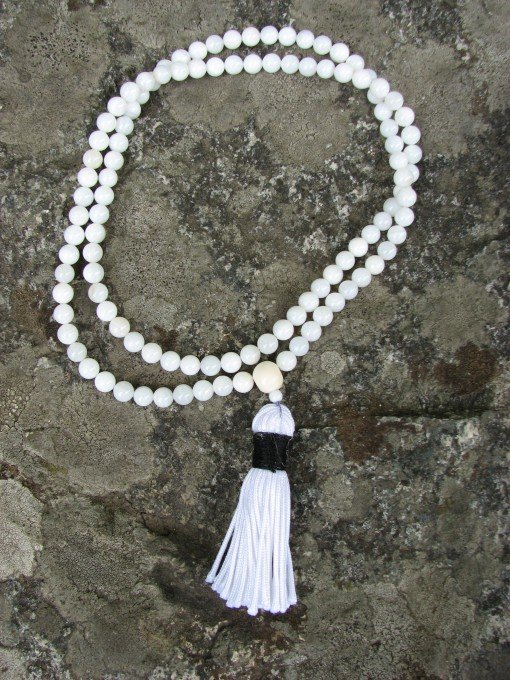 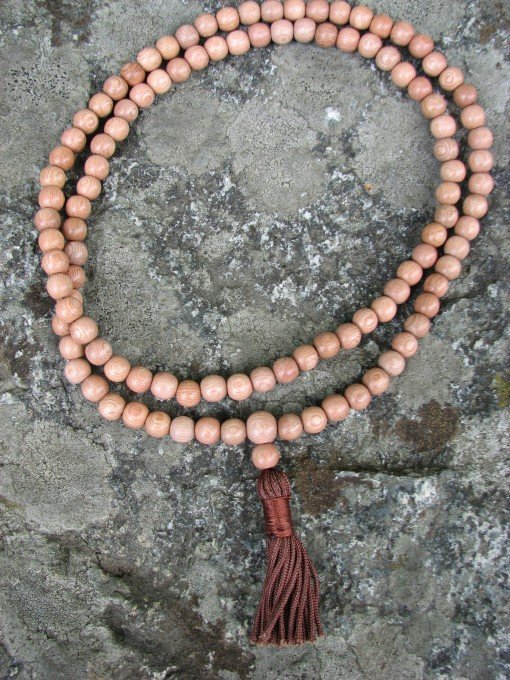