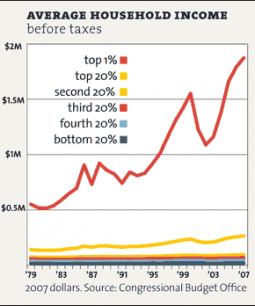 Be forewarned. You’re going to see a bunch of headlines soon like this one from Business Week: Economists Nail It: You Can Never Be Too Rich.

The Business Week post is rather breathless: “I just spoke with Justin Wolfers, co-author of a short but important new paper that concludes the more money you have, on average, the happier you are.” I almost see the author’s laptop screen misting as he pants with excitement.

Business Week describes this finding thus: “That may seem to deserve a Homer Simpson “Duh!” award for most obvious research finding of the month” before going on to admit that actually previous research has shown this not to be the case: once one’s basic needs are met, happiness increases with income, but only to a point. Thereafter (and if I recall correctly the limit is about $100,000) there’s pretty much a plateau.

The Buddhist perspective on this is nicely expressed in a verse from the Dhammapada: “Not even if it rained gold coins would we have our fill of sensual pleasures.” Craving is essentially insatiable. We can satiate simple needs, as for food or companionship. But there’s no end to craving. Real happiness is more to do with the quality of our experience — how mindful, patient, kind, wise we are — and is less to do with our annual income.

Craving for wealth is usually tied up with desire for status — wanting to be “better” than others. I heard an amazing interview on the radio with someone who had been studying the rich, and he recalled a conversation with someone who had “only” $2 billion. The billionaire had lamented, “You know, I look at these people with five, six billion, and I think, Where did I go wrong?” So the problem with basing your happiness on being richer than others is there’s always someone richer than you, and even if you’re number one there’s a load of people on your heels.

But back to that research. It’s based on a Gallup poll question:

“Please imagine a ladder with steps numbered from zero at the bottom to ten at the top. Suppose we say that the top of the ladder represents the best possible life for you, and the bottom of the ladder represents the worst possible life for you. On which step of the ladder would you say you personally feel you stand at this time, assuming that the higher the step the better you feel about your life, and the lower the step the worse you feel about it? Which step comes closest to the way you feel?”

Did you notice the bit about where it asks you how happy you are? Neither did I. The question isn’t about happiness. The word happiness isn’t in there, nor are any closely related words.

Yes, having imagined the idea of a hierarchy from “the worst possible life” to “the best possible life,” participants in the survey were asked then how they felt about their lives, but now the question is affected by the earlier assumption. “On which step of the ladder would you say you personally feel you stand at this time” comes before the factors that you’re supposed to now go back and integrate into what you’ve already imagined. Those factors now ask you how you feel about your social standing, which is not the same as “how happy are you?” Altogether, this is a complex question asked badly. Actually it’s more than one question, and we don’t know which one people were replying to, or how they understood the various components.

But this interpretation, “the more money you have, on average, the happier you are,” will get a lot of press. For one thing, it’s entertaining and provocative. Second, there are vested interests that try to convince us that we have to have more stuff in order to be happier. And third, there are people who are near the top in terms of wealth who now see their mission as raw power and they need us to be passive so that we can allow them to gain political power and gain even more wealth and power.

Their aim seems to be to amass enough wealth to completely insulate themselves from the effects of their wealth-gathering. So you trash an economy and throw millions out of work? No problem. There are always other economies to loot. And in any event, in amassing billions in this way you’re not just making yourself richer. You’re making others poorer. Which means you’ve landed on hedonism’s “Double Word Score,” because craving wealth is about feeling superior, and you’re now both absolutely richer and comparatively richer because of having brought everyone else down.

Back when the late Margaret Thatcher was first elected, I had a shocking encounter with a young man I’d worked with one summer. I bumped into him at the train station, and we got chatting until the train arrived and the doors opened. As the crowd got onto the train I hung back to allow others to get seated. There were lots of older people and people with young children boarding, and being well-trained in manners it was natural to let them sit first. If I had to stand as a consequence, I’d feel fine about it. But this former colleague tried to drag me to the front of the line: “You’ve got to grab what you want; otherwise someone else will get it, right?” He looked at me for confirmation, but I suspect all he got was confusion, and possibly even distaste. I’d honestly never heard selfishness articulated as a personal virtue before, at least by real people. Yes, I’d heard Thatcher and her crew advocating selfishness as the answer to society’s problems, but I didn’t think anyone actually believed it. Certainly not people I knew. I thought, “My god, what kind of a world am I living in now?” I soon found out.

We’re still living in Thatcher’s world (and Reagan’s). And Gordon Gekko’s. The crash of 2008 and the Great Recession that many of us are still experiencing, even if it no longer officially exists, were perhaps its high water mark. But I think the tide is starting to turn. More people are beginning to realize that we actually have to think of everyone’s wellbeing, and not just our own. If we’re all only thinking of our own wellbeing, then who’s going to be there to help you when you fall?

But any hint of this turning of the tide is a threat, which is why the Occupy movement was so roundly criticized in the media: “No one knows what they want!” Of course we knew what they wanted: an economy that works for everyone, not just the rich, and for the people who had destroyed the economy through fraudulent practices to be punished. It’s obvious. But the media couldn’t, in general, admit this. You don’t want to bite the hand that feeds you, and the media is well-fed. So the message has to be spread: wealth makes you happy! This justifies the cravings of the super-rich, and keeps us on the hedonic treadmill of consumerism. And so papers like this will appear, and will be relentlessly repeated until they are “common knowledge.”

The Buddha’s realization that happiness is something, fundamentally, that can’t be bought is his “dangerous idea.” Or one of them. One of his other dangerous ideas was that for the long-term stability of a nation, there has to be a fair distribution of wealth — something that’s been notably lacking in recent years, where productivity has soared, and yet wages for ordinary people have remained stagnant.

So be skeptical. Be very skeptical of this research “showing” that money makes you happier — research based on a question that didn’t even ask about happiness. These “memes” can be poisonous. Just think how much suffering has been caused by austerity measures in Europe, which were justified in part by a paper based on an Excel spreadsheet error.

If you want to be happy, there are plenty of things you can do, and those things will tend to make other people happier too. Earning more money? Don’t let me put you off, especially if you’re struggling financially, but if your basic needs are covered there are better uses of your precious human existence than pounding away on the hedonic treadmill.

Bodhipaksa
Bodhipaksa has been meditating since 1982 and teaching since around 1989. He is a Buddhist practitioner and teacher, a member of the Triratna Buddhist Order, and a published author. He launched the Wildmind website on November 11, 2000. Bodhipaksa has published many guided meditation CDs, guided meditation MP3s, and books. He teaches in various meditation centers around the world. He is supported by donations from members of the Wildmind community. If you're interested in becoming a supporter and in getting access to more of Bodhipaksa's teachings, please click here to learn more about his meditation initiative.
politics, spiritual practice & happiness, wealth