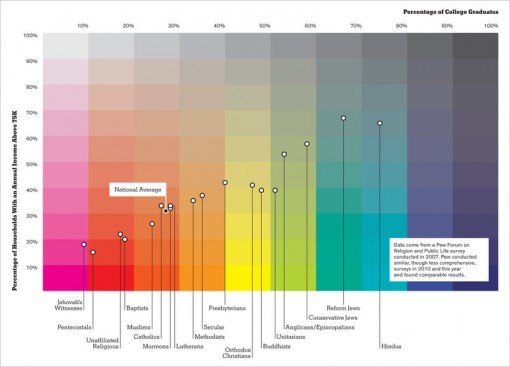 A Pew Forum on Religion and Public Life survey on religion, education, and money was covered in a recent NYT article. The article was titled Is Your Religion Your Financial Destiny?, which is probably misleading because it doesn’t seem that the survey could possibly indicate whether educational attainment and family income were the result of people’s religious affiliations, or vice versa. Other issues might also be at work, such as geographic ones. If you’re in a poor, rural area there’s probably not likely to be a Buddhist temple handy, but there may well be a Baptist church.

Despite all this, the data are fascinating. As the NYT report says:

The most affluent of the major religions — including secularism — is Reform Judaism. Sixty-seven percent of Reform Jewish households made more than $75,000 a year at the time the Pew Forum on Religion and Public Life collected the data, compared with only 31 percent of the population as a whole. Hindus were second, at 65 percent, and Conservative Jews were third, at 57 percent.

On the other end are Pentecostals, Jehovah’s Witnesses and Baptists. In each case, 20 percent or fewer of followers made at least $75,000.

As an aside, I find myself wishing that my Jewish ancestors hadn’t converted, although none of them seemed to have much luck with money anyway and those that made the most money did it in ways that ended up with them also earning hefty prison sentences.

The graph makes more or less a straight line, showing a strong correlation between education and income, with a few outliers. In the middle we have Orthodox Christians, Buddhists, and Unitarians, who are all modestly less well off than you might exist, and right at the end the most highly educated religion — Hindus — are still the richest, but despite their educational attainments they’re less rich than you would expect.

What does this tell us about Buddhists? Apart from the obvious facts that they’re considerably better educated than average, and that given that level of education they are less well-off than might be expected, there’s little that can be said definitively. Apart from anything else, who are America’s Buddhists? There tends to be a rather sharp divide between America’s “ethnic Buddhists” — immigrants from Asia or their descendants — and so-called “Western Buddhists.” It’s not clear what the relative sizes of the two populations are, but it’s conceivable that Asian-American Buddhists (who are also Western Buddhists, surely?) constitute at least half of the total Buddhist community in the US.

Often the two groups practice very different kinds of Buddhism, and for very different reasons. And there’s a tendency for the two groups to be separate. They may practice in different languages and in different places (temples versus “Buddhist Centers”) Even in publications the two communities are separated. Arun Likhati has kept an “Asian Meter” for the popular magazine, Tricycle: The Buddhist Review. He’s found that Tricycle consistently under-represents Asian Buddhists in its pages.

Nevertheless, the two communities may have much in common as regards education. Asian families, including Buddhist Asian families — tend to value education highly. Coming from another direction, European-Americans who are highly educated are often less interested in traditional religion, and more open to other spiritual paths, including Buddhism. That covers the finding that Buddhists in the US (from both groups) tend to be generally highly educated, but what about their being less affluent than you might expect?

There’s no hard data available. The study focuses on annual income, so its findings tell us nothing about whether Buddhists are giving more or their money away. All we know is that fewer of them earn over $75,000 a year. The NYT article states that “some religions are more likely to produce, or to attract, people who voluntarily choose lower-paying jobs, like teaching.” They don’t back that statement up with any data, but I think both parts — “produce” and “attract” — are true.

But I think that it’s more the case that Buddhism “attracts” well-educated people who are in social work, teaching, alternative health professions, and social work. Why do I think that? This is purely anecdotal, of course, but I meet a lot of those sorts of people at Buddhist centers. And it seems to me that those are the professions people hold when they first walk through the door. Westerners aren’t, on the whole embracing Buddhism as stock traders and Fortune 500 executives and then taking up high-school teaching because Buddhism somehow encourages this. Rather, high-school teachers (and people in other less highly paid occupations) are embracing Buddhism. Sometimes — perhaps it’s most often — this is because they’re stressed and start by taking up meditation in order to relax, and this is followed by a deeper exploration of Buddhist practice. Buddhism may be more acceptable to many people because it can be viewed as a more “rational” system of personal development rather than as a belief-oriented religion. It may also be attractive because it is perceived as a religion of compassion, which is presumably a plus factor if you’re a teacher or social worker or nurse because you want to help people.

Once Westerners have converted to Buddhism, however, I think they do on the whole tend to be less invested in consumerism, and this may lead to them not pursuing promotion, or otherwise moving to higher paid jobs. Again, this is just my anecdotal take, based on my perceptions of the people I’ve encountered in Buddhist centers. So I do think there’s an element of Buddhists “voluntarily choosing lower-paying jobs,” but it’s a secondary aspect. It’s more that people who are highly educated who have already chosen lower-paid jobs are more attracted to Buddhism in the first place.

Bodhipaksa
Bodhipaksa has been meditating since 1982 and teaching since around 1989. He is a Buddhist practitioner and teacher, a member of the Triratna Buddhist Order, and a published author. He launched the Wildmind website on November 11, 2000. Bodhipaksa has published many guided meditation CDs, guided meditation MP3s, and books. He teaches in various meditation centers around the world. He is supported by donations from members of the Wildmind community. If you're interested in becoming a supporter and in getting access to more of Bodhipaksa's teachings, please click here to learn more about his meditation initiative.
meditation and compassion, meditation at work, money, society