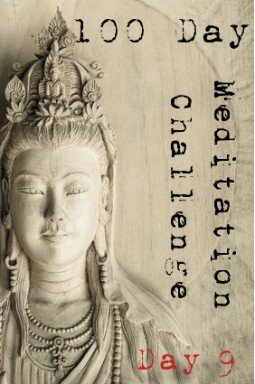 Someone on my Google+ Community asked the following question:

During my sit I saw a bright white/yellow circle shape flash of light in between my eyebrows (closed eye meditation). The light came rushing at me and filled my vision then vanished. While very interesting, it actually freaked me out a bit. Is there a name for this experience?

I replied, “It’s what we call a samapatti. There are various kinds of these, and some of them involve light, although they can be tactile, proprioceptive, auditory, etc. They usually arise as the mind is starting to settle, and they’re more common in people who are relatively new to meditation. They’re nothing to worry about (they’re common) nor are they something to get very excited about (they’re just “noise” in the system).”

“There are more stable sensations that are similar but more conducive to mindful concentration, and those are called nimittas.Ã¯Â»Â¿”

I see samapattis as arising in a few ways: They’re very similar to experiences that people have when they’re exposed to sensory deprivation, which makes me think there’s an element of that going on; the mind is getting quieter, but we’ve not fully tapped into the richness of our experience — especially of the body — and so the mind starts trying to make sense of random neuronal “noise.” One of the most common samapattis is the perception of “swirling lights.”

Samapattis can involve exaggerations of actual sensations. Someone else recently wrote: “I just started meditation, and today while I was meditating, I felt like I was being pulled to the left, and felt like I was stuck leaning significantly that way, even though when I opened my eyes I was sitting perfectly straight. Do you have any thoughts on what that might be about?”

Quite possibly she was actually leaning a little to the left, and because the mind was quieter, those particular sensations were sensed much more strongly than usual.

Sometimes people feel that their hands or lips are huge, and this actually reflects the rich sensory input that those parts of the body have. If you’re familiar with the image of the sensory homunculus then you’ll have an idea of how disproportionate the body can feel. In this particular case I suspect that some part of the brain that’s responsible for convincing us that the hands and lips are actually proportional, despite the fact that they’re sending huge amounts of data to the sensory parts of the brain, has gone “offline.”

Samapattis tend to be a bit distracting. So we just notice them and keep on with the practice. They’re not a sign that you’re going crazy, nor are they a sign of impending enlightenment. They are a sign that the mind is starting to quiet down, but also that you’re learning to adjust to the reduced level of inner quiet.

I haven’t been having visual fireworks much with my eyes being open. I light a candle for my meditation and concentrate on that which has helped me focus a good deal. With my eyes closed I find my mind will “play” with the shadows and light sesnses my eyes look for in the dark behind my lids. With my eyes open they will dart around and look at anything in front of them. The flame of the lit candle helps focus my vision as I focus on the breath.
This is good to read about so when these do happen I don’t thinks I’m enlightened or having a crazy flashback to my late teen years!

9/100
First stage of Metta Bhavana for 15 minutes. Unfortunately I missed day number 8 because of food poisoning which put me in bad condition (I’m studying in China where canteens and restaurants don’t have to fulfil the same health requirements as in western countries…). I tried to use my temporary health problem to help me wish myself good, but I must admit it didn’t work much… Maybe I need more time and practice to get benefits from this meditation.

9/100 Sat for 30 minutes. I am just sitting in the morning and doing a guided metta bhavana at night. Last night I did it with “The Heart’s Wisdom” cd. It was a little longer than I usually meditate, but it was a good experience.

Day 9, well 8 for me. but at least I have been that consistent. I did my sitting in my car in a parking lot this morning because that is where I found myself. I was on my way into an interview. I am extremely pleased that I managed to get there about 20 min. early, so I had 10 min to sit. Surprisingly, and happily my mind quieted right away, and I was able to function in the interview easily and with some confidence. Can’t wait till tomorrow.

Intense long rehearsal today so it was a tricky meditation tonight as there was so much going on in my mind. I play double bass so after a 7 hour rehearsal everything was achey and I felt fidgety and uncomfortable for a while but continued and sat for 20 minutes and had a really vivid metta bhavana. It’s strange how the “flavour” of that meditation changes every single time. Today’s was very, hard to explain, but the word “luminous” comes to mind. So worth sticking out the achey back, faffing with half lotus that’s usually so comfortable, and mind that kept wandering back to work for the first 10 mins or so. Think I’m going to just get up earlier to meditate after my shower every morning. After a day’s work, when I’m tired, it’s harder I think. When do others find the best time is to meditate? It’s a nice way to wind down at night but for me it’s more beneficial in the morning so Im going to try that for a week and see what happens!

Short one today, dunno why.

Hi, Heather
I find meditating at the start of the day most beneficial because it sets me on the “right track” for the day. I’ll often wake up feeling a bit off-colour mentally or emotionally, plus pretty soon my mind will get churning on problems to fix, or planning or whatever.

If I stop and meditate, it’s like getting my bearings. I once heard the analogy of starting up a computer and it defaults to Times New Roman (or whatever) and you need to take the time to select the font you really want.

Of course it’s also great to meditate at the end of the day. But, personally, if I had to choose one or t’other, my vote is as early in the day as possible.

[…] Yesterday I wrote about samapattis, which are slightly strange, and often a bit disturbing, experiences that can arise in meditation. They’re often a bit hallucinatory, and it’s not a good idea to pay much attention to them. […]

I’m confused by your use of samapattis for strange experiences during meditation when the word appears in most other contexts to be used to class states of relative non-perception (absence of certain cittas).

Can you clarify perhaps?

Yes indeed. It’s a non-standard usage of the term. This is the meaning (or one of the meaning) of the word samapattis that was passed on to me, but I’m not sure where it came from! The Vimuttimagga talks just about nimittas (of the helpful kind) and “certain other nimittas” which are the unhelpful experiences I’m discussing here. More recently I’ve been avoiding using the s-word for these, wince it’s confusing. Quite possibly I was introduced to a wrong usage of the term.