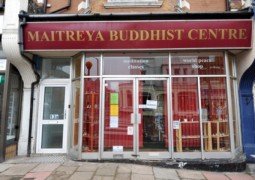 An extraordinary power struggle is tearing apart a Buddhist community in England.

While scouring the headlines for stories that might fit on Wildmind’s blog under the “news” category, I came across the intriguing headline “Dispute closes Buddhist centre,” discussing problems at the Maitreya Buddhist Center of the New Kadampa Tradition, or NKT, in Bexhill in East Sussex.

Unfortunately both newspapers that carried the story had removed the article. But a friend came to the rescue by pointing me toward Google’s cache of the story, and someone on Facebook sent me a link to a blog which presents one side of the dispute (read the blog from the bottom up).

First, a bit of background. The NKT were founded by Geshe Kelsang Gyatso, and they’re one of the largest Buddhist movements in the UK. Probably in terms of the number of centers they have, they are the absolute largest, although some of the “centers” are no more than rooms rented for an evening class. They have a strong expansionist policy.

The NKT is also famous for the “Dorje Shugden Controversy,” which is, to my mind, a rather weird dispute about a Tibetan Deity. Dorje Shugden is a deity who has been worshipped in Tibetan Buddhism since the 1700s. However, the Fourteenth Dalai Lama came to the conclusion that Shugden is not an enlightened being but is a worldly figure, and he first spoke out against his worship and then issued a ban on the practice. Since Geshe Kelsang Gyatso is a firm believer in Shugden, this caused a bitter dispute between the NKT and the Dalai Lama. This puts the NKT in the unfortunate position of being opposed to one of the most popular and revered figures in the world.

This particular story, however, has nothing at all to do with the Dorje Shugden dispute, which is a phenomenon I find weird (it’s a dispute over a figure I consider to be purely imaginary). It seems to have to do more with tensions between an individual, and legally autonomous, local center of the NKT, and the central organization itself, to the point where the central NKT is attempting a takeover. Whether or not they have good reason to do that I don’t know, but it doesn’t seem that they have the legal right to do so, if indeed the local centers are constituted as independent charities with their own boards of trustees.

Bearing in mind that we only have one side of the story presented here, the Maitreya Buddhist Centre, which is a charity registered under English law and with its own board of trustees, ended up with a resident teacher, Kelsang Chodor, who made organizational decisions that were unpopular with the board. A teacher who was asked to stop teaching refused to do so, and when Chodor bypassed the trustees in some of his decision making he refused to meet with them. The newspaper article outlines the background and explains the build-up of the conflict:

A volunteer at the Maitreya Buddhist Centre claims “a traumatic and bitter dispute” has left this former haven of peace changed forever.

Now the building in Sea Road is locked with no sign of when it will be opened again.

Andrew Durling helped set up the meditation centre having been at the start of New Kadampa Tradition meditation classes in Bexhill.

He was one of the trustees when the charity was registered and was responsible for the oversight of administration.

The centre became established and thrived with up to 50 people a week attending regular meditation classes led by resident teacher Lam-ma and other teachers she appointed.

However since she retired there has been a breakdown in the relationship between NKT and the centre’s management team, and from there Andrew and others have struggled to reach agreement with the head office based in Cumbria.

One of the trustees claims that the central NKT tried to replace the board of trustees, which would seem to be an illegal course of action:

The Charity Commission has now replied to the submission made to it by the charity trustees of Maitreya Buddhist Centre many weeks ago. The key element of that reply was that the attempts by NKT head office back at the beginning of March to remove the existing trustees of the centre and to replace them with trustees of the NKT’s own choosing was invalid and a breach of the centre’s own constitution

As the newspaper article puts it, “This appears to have become a struggle for control between a handful of volunteers and the umbrella organization which has more than 1,000 branches throughout the country.”

The blog also alleges that the NKT made “repeated threats of litigation” against the center.

From an organizational point of view I find this fascinating, partly because the organization I’m part of (Triratna) is similarly constituted in such a way that individual centers are independent. But what’s difference we don’t have a “head office” that could attempt a takeover. The most that could happen if a center were, for example, to go off the rails, is that the center could be told that they could no longer consider themselves to be affiliated with the parent organization. This actually happened once, with our Croydon center, where the Order member in charge of the situation there had created a kind of personality cult based on manipulation and bullying. He wasn’t the only person involved, because he had created a kind of “gang” that maintained control using the same techniques he himself employed. After attempts were made to correct the situation through dialogue, Sangharakshita, then founder of the Triratna Order, told the board of trustees that they would have to change their ways or cease being affiliated with the rest of the Triratna Community. And things did change as a result, with the ringleader leaving both the Croydon center and the Order.

The Bexhill situation is also interesting to me simply because it’s got to the point where a Buddhist center is no longer functional because of internal politics. That’s quite an extraordinary situation, and I’ve never head of that happening before. I’m not sensing a lot of dialog going on, which is unfortunate. Of course we don’t really know what’s going on. I’ve only seen one side of the story, and even if I was aware of both sides it would be impossible to be certain of the facts. Unfortunately, as the newspaper reports, “The head office was approached several times for a comment this week but none was forthcoming.”

The NKT has quite a traditional authoritarian structure (traditional for Tibetan Buddhism, anyway), where monks and nuns are basically told where to go and when. The NKT tries to be highly centralized, with the guru making decisions for the local centres, but the local centers are (as I understand it) legally separate entities, and so ultimately the guru (or the central organization) has limited legal control over them. That suggests a fragility in the NKT. Two ways to hold a local center in place when it has problems with the central organization are dialogue and authoritarianism. In this case the NKT seems to have adopted an authoritarian approach, through wielding power.

This following excerpt from the blog reveals a fascinating twist in how this power is being used:

Creating an alternative website for the center — one not controlled by the trustees — is an extreme step, or mis-step. It suggests that the NKT is struggling, within an authoritarian mind-set, to bring one of its centers back into the fold of central control.

This tactic, of setting up an alternative website, is one I’ve seen the NKT use before, albeit in a different form. Several years ago, members of a Buddhist Center in England were surprised to discover that the NKT had set up a website using the name of their center, which was not in any way NKT affiliated. This was almost certainly a breach of trademark law as well as a breach of UK charity law. It was also rather unpleasant — a kind of spiritual “phishing” attempt. The situation, fortunately, was resolved through dialog between the two organizations.

Back in the Bexhill power struggle, the blog also describes a new management team being sent in to wrest control from the elected trustees:

It appears that Maitreya Buddhist Centre has now been ‘taken over’ and a new management team is attempting to take charge of the premises. This is as flagrant a violation of charity and company law as it is possible to achieve …

Generally, if the board of trustees is properly constituted, then an outside entity has no legal standing to take over the center. Even the parent body — the NKT — can consider itself to be only the spiritual, rather than the legal, head of the center. [This may not be the case with the NKT, although I believe that charities are meant to be independent and not under central control.]

It seems that having opted for an authoritarian approach, the NKT is finding that it’s not a viable option, or at least not a straightforward one.

I take no pleasure in reporting these events. The situation must be intensely painful for all concerned, and I truly hope that dialog and trust can be restored.

I wonder, however, whether dialogue is now even possible in Bexhill now that the authoritarian path has been chosen? Trust is more easily broken than restored.

This pain is evident both in the comments of Andrew Durling, one of the trustees, who has been at the epicenter of the conflict:

“Whoever ‘wins’ (so called) the situation will find there is nothing left. I am as guilty as anyone else.

“This bold experiment in bringing buddhist meditation to Bexhill has, temporarily at least, failed.”

He said the community had been irrevocably split, with some backing him and others supporting NKT, and added: “It is anyone’s guess whether it will be alright.”

It’s also evident in the comments of a woman who had been attending classes at the Maitreya Centre:

“They have taken my place of worship away from me. It isn’t a proper buddhist centre anymore.”

She added: “It is just awful.

As the Buddha said, “Spiritual friendship is the whole of the spiritual life.” It’s worth remembering that as we witness this painful conflict.

Bodhipaksa
Bodhipaksa has been meditating since 1982 and teaching since around 1989. He is a Buddhist practitioner and teacher, a member of the Triratna Buddhist Order, and a published author. He launched the Wildmind website on November 11, 2000. Bodhipaksa has published many guided meditation CDs, guided meditation MP3s, and books. He teaches in various meditation centers around the world. He is supported by donations from members of the Wildmind community. If you're interested in becoming a supporter and in getting access to more of Bodhipaksa's teachings, please click here to learn more about his meditation initiative.
New Kadampa Tradition, sangha