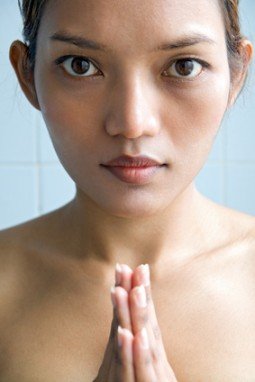 Do Buddhists pray? It certainly looks like it sometimes.

Since Buddhism has no creator God you might assume that the Buddhist tradition has no room for prayer. The Buddha wasn’t a God. So would be the point of praying to him, or of praying at all?

But depending on what kind of Buddhism you’re looking at, you’ll also see practitioners asking to be reborn in a Pure Land paradise after death, or using mantras to call repetitively on the name of a Buddha or Bodhisattva figure, or even asking one of them for a favor, or giving thanks for a blessing. And Tibetan Buddhism uses prayer flags and prayer wheels. What are all those about?

When Pure Land Buddhists call upon the saving grace of Amida Buddha in the hope of being reborn in his paradise after death, they’re doing something that to all intents and purposes is a form of prayer. For example here’s one Pure Land prayer: “I single-mindedly take refuge in Amitābha Buddha in the World of Ultimate Bliss. Illuminate me with Your pure light and draw me in with Your loving, kind vows! Thinking only of You, I now call the name of the Tathāgata. For the sake of the Bodhi Way, I supplicate to be reborn in Your Pure Land.”

This isn’t the form of Buddhism I practice, and it doesn’t particularly appeal to me, but it’s not something I want to dismiss or be condescending about, Although it’s tempting for westerners to see these beliefs and practices as superstitious or naive, there is in fact a well-developed “theology” based around Pure Land practice, and it’s based on meditations that the Buddha himself encouraged: namely, Buddhānusati, or “Recollection of the Buddha.” In Buddhānusati we reflect on the qualities of the Buddha, and in doing so we develop an affinity with those qualities, and with enlightenment. And so Buddhānusati helps us move toward becoming enlightened ourselves.

Reciting mantras is a very similar practice. When you hear a Buddhist reciting Om Manipadme Hum, what they’re actually doing is repeating the name of the Bodhisattva of compassion, Avalokiteshvara. One of this figure’s other names was Manipadma (The Lotus-Jewel One). This kind of mantra practice can be very effective even if you don’t believe Avalokiteshvara exists. Mantra works to a large extent by giving the mind a rest from the incessant angry, grasping, and anxious thoughts that plague us in our daily lives. When you’re reciting a mantra you just aren’t able to keep up a negative inner monologue the way you normally might. And again the mantra is a form of Buddhānusati, and can help us to call to mind the qualities of a compassionate presence, and help those qualities manifest in our own minds. 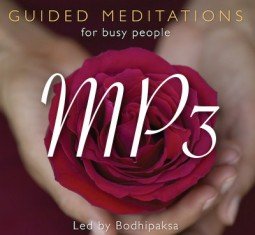 If you like my articles and want to support the work I do, please click here to check out my books, guided meditation CDs, and MP3s. Or you can make a donation.

But it’s clear from Tibetan teachings on devotional practice that the Buddhas and Bodhisattvas are not separate from the nature of our own minds. It’s only a slight simplification to say that when you pray to Avalokiteshvara, you are invoking the power of your own potential awakened mind.

It’s hard to say how many westerners believe that prayer flags and prayer wheels work in this way. My guess is that only a small percentage does, and that for most of us prayer flags are a form of spiritual decoration, with mostly symbolic value.

With these various forms of practice going on within Buddhism, it would be hard to claim that there is no prayer in Buddhism. It is possible to point to differences between Buddhist prayer and the prayer of the mainstream theistic traditions, but the similarities are much stronger than the differences.

Nevertheless, sometimes people feel the need to pray, even though prayer strikes them as being a bit silly. My own teacher, when asked about this, advised, “If you feel like praying, then pray, and worry about the theology afterwards.” That’s wise advice.