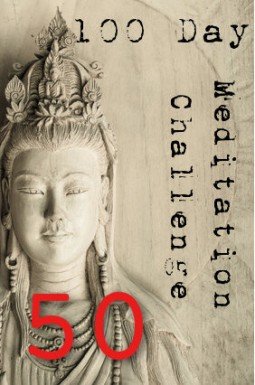 Good intentions are hard to sustain, aren’t they? That’s why I came up with my affirmation: “I meditate every day. It’s just what I do. It’s part of who I am.”

I realized that if I wanted to meditate absolutely every day it was never going to work if I “intended to” meditate. I needed to just do it. And in order to just do it there had to be an absence of choice, in a positive sense. Whenever there’s any process of deciding “will I or won’t I meditate today” then there’s inevitably going to be a time when we’ll decide “nah, can’t be bothered,” because inherent in having to decide is the notion that meditation is an optional extra. Or one day you’ll just forget to even think about whether or not you’re going to sit.

So what I’ve done is to make meditating daily just “part of who I am.” I no longer have to choose. I don’t have to decide. It’s just going to happen.

I wonder, in fact if part of the difficulty with getting ourselves into a new habit is that we elevate the idea of choice so highly. It’s hard to frame “not having a choice” as a positive thing. (Of course we always do have a choice — it’s more in whether we see ourselves as having a choice.) But we can either keep the choice open, and not meditate regularly, or remove the sense of choice, and do it regularly. You can’t have both.

Because we elevate choice so highly, and equate it with freedom and happiness, we tend to assume that seeing ourselves as not having a choice is going to lead to unhappiness. But in fact, choosing not to have a choice has made me much happier! I’m happier if I meditate every day because the meditation does me good (and the cumulative effects of meditation seem to be more intense with daily practice), but I also no longer have to face any sense of regret due to not meditating, and I don’t have that horrible “will I or won’t I” feeling when you’re caught between two conflicting impulses.

I believe that in psychology they call this “binding.” You choose not to have a choice, so that you’re more likely to do the thing that’s most beneficial in the long term. You “bind” yourself to the long-term good. The thing is, part of you already wants to meditate every day. Other parts of you want to have options. You can’t please both factions at the same time, but if you do meditate every day you’re doing what’s best for you in the long term. And those choice-hungry factions soon quiet down.

It’s been interesting seeing how many people have taken up this “mantra” and found it to be beneficial. I’ll be interested to see how you get on with it.