Knowing the mind of the Buddha 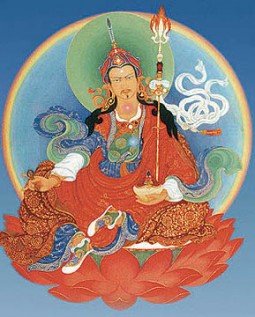 A little under two years ago I was on a retreat with other members of the Triratna Buddhist Order, which I’ve been a member of since 1993. We were discussing the visualization meditation practices we were each given at the time of our ordination.

At the time of my own ordination, the practice I had requested and was formally given — the visualization of Padmasambhava — was described as being my orientation toward enlightenment. The visualized form of Padmasambhava — a red-robed figure with a trident and skull cup overflowing with the nectar of immortality — embodied my personal connection with awakening.

“Enlightenment” can be a rather abstract concept. How can we aim to attain a state if we have no feel for what it’s like to experience it? Imagine that you wanted to develop the quality of kindness, but had no examples of kind people to inspire you? Developing the quality of kindness wouldn’t be impossible, but it would be a lot harder. So it’s helpful to develop a clear and embodied sense of what an awakened being is like, so that we can resonate imaginatively and emotionally with it (which is now no longer an “it,” but a “he” or a “she”).

I started my contribution to the discussion without much enthusiasm, because my practice of the visualization of Padmasambhava had fizzled out a long time ago, and I didn’t feel good about that. When I was ordained there was a lot of stress put on doing the visualization practice regularly, and although I’d started off well, I found visualizing to be very hard. I’m actually a very visual person, but I had some kind of block regarding the practice.

Actually, before my ordination, I had a very strong personal connection with Padmasambhava. I had many dreams about him, and sometimes when I looked at pictures of him I’d “hear” him speaking to me — often giving me very useful advice. (No, I’m not crazy; I’m aware this was really me speaking to myself.) I spent months sculpting his trident, which is very elaborate, and then rowed out into the middle of a loch in the Scottish Highlands and offered the trident up to the depths. My connection with Padmasambhava was a big deal for me.

And there was a sense of shame about my lack of fidelity that came up as I talked on the retreat about how I’d ceased doing this visualization practice. But as I continued to talk about how I’d been exploring alternative approaches to awakening that were more rooted in direct experience, I realized that I had never lost my fidelity to an underlying quest, which I expressed that day as wanting to know the mind of the Buddha.

This was the quest I’d been involved in even before I encountered the Buddha. Even in my teens I knew there was an alternative, more real, and more satisfying way to experience the world. There was a different way to see, and a different way to be. And I wanted to know what that was like. I wanted to experience the world that way — whatever “that way” was.

Although I’d stopped visualizing Padmasambhava, knowing the mind of the Buddha was always my goal. And my connection with Padmasambhava was just one particular way to seek that goal.

Now, just as mudita is the joyful appreciation of the skillful in others, where the good in us resonates with the good in others, so I believe that upekkha can involve valuing and appreciating the insight that others have. It’s that within ourselves that seeks insight resonating with the insight in others. Upekkha involves wishing the highest possible good — the benefits of awakening — for others. And so we naturally respond with gratitude, respect, and even devotion, to those who embody awakening. And that in fact is the point of the practice of visualizing enlightened beings.

The Buddha himself (or possibly his early disciples) seems to have encouraged this way of approaching awakening, and there was a practice that they called “Buddhānusati” — reflecting on the Buddha and allowing ourselves to resonate with his qualities.

This doesn’t necessarily have to take the form of a visualization meditation. That didn’t work out well for me, although perhaps I gave up too soon.

So we seek to know the mind of the Buddha, to get close to him and to develop an appreciation and respect for awakened qualities — qualities which we ourselves are bringing into being. And in the upekkha bhavana practice we can wish that those qualities manifest in others, so that they know the peace and joy of awakening.

Bodhipaksa
Bodhipaksa has been meditating since 1982 and teaching since around 1989. He is a Buddhist practitioner and teacher, a member of the Triratna Buddhist Order, and a published author. He launched the Wildmind website on November 11, 2000. Bodhipaksa has published many guided meditation CDs, guided meditation MP3s, and books. He teaches in various meditation centers around the world. He is supported by donations from members of the Wildmind community. If you're interested in becoming a supporter and in getting access to more of Bodhipaksa's teachings, please click here to learn more about his meditation initiative.
100 Days of Lovingkindness, The Buddha, upekkha, upekkha bhavana, visualization