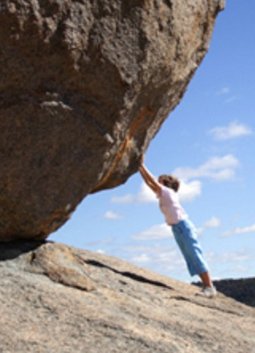 To recap, upekkha is the desire that beings (ourselves included) know the profound peace of awakening. Since lovingkindness is the desire that beings be happy, upekkha is kind of lovingkindness on steroids; for beings to attain the deepest peace possible, they have to awaken from the delusion of separate and permanent selfhood, which is a key source of our suffering. It’s losing this sense of separateness and permanence that’s, in fact, the key to awakening. So to be “upekkhaful” (and I may be the first person on the planet to have used that term in writing!) is to desire that beings awaken and find peace.

I’ve already talked about one way in which we can “un-self” — by examining the impermanence of everything that we could take to constitute a self. Everything we can become aware of within ourselves — the body, the physical sensations arising from it, our feelings, our thoughts and memories — is changing all the time. So the casual but deep-rooted assumption we have that there is something “essential” that defines us is challenged. And eventually that assumption is dropped. It’s seen to be a myth, and is abandoned, like childhood stories of Easter Bunnies and Santa Claus.

The argument here is that if our bodies were really our bodies, then we’d be able to control them completely, for example by commanding them not to age. If our feelings were truly our own we’d be able to change our likes and dislikes at whim. If our perceptions were truly ours we’d be able to look at these words and see them as abstract shapes rather than as words. If our “determinations” were our own then it wouldn’t be hard to change our habits: if you wanted to diet, for example, you’d just diet, without any conflict or slip-ups. If our consciousness was truly our own, we could just decide to be happy, and we’d be happy. We could decide not to think, and we wouldn’t think.

Now most people would likely say in response to this that they can’t control themselves entirely, but they do control themselves to some extent, and so they have a self that in some sense — in some important sense — does in fact own its constituents. Aren’t you able to wish that your open hand clench into a fist and then relax back into an open hand again? I’ll come back to that…

For now, just start to notice, as I often do and as I often encourage students to do, the mystery of where your thoughts and actions come from. One of the most striking things is to notice speech and thought. When you’re next in the flow of a conversation with someone, start to hear your own words as if you were an outside observer, listening to yourself. And then notice that you don’t know what words are going to emerge from your mouth before they emerge. There’s no consciousness of a process by which you assemble the words in advance. They just appear. You don’t know what you’re going to say any sooner than the other person you’re talking to. That’s kind of weird. Where does your speech come from? It just appears to you, fully formed, as if you’ve been handed a script. Who is the script writer?

Sure, there are times that you rehearse what you’re going to say. You’re listening to your friend talk and also formulating a response (which means you’re not really listening to them, but let’s leave that for now). But start to notice that you don’t know what you’re going to think before you think it. Where does your thought come from? Again, it just appears to you, fully formed. Thought is just a special case of speech, where you’re speaking to yourself. “You” (the conscious you) doesn’t have any hand in creating your thoughts. “You” (the conscious you) just notices them as they arise. If “you” (the conscious you) did actually generate thoughts, then you’d be able to control what you thought, and not have this strange situation where you’re trying to pay attention to your breathing but instead are bombarded with a constant stream of inner chatter.

Another striking example of how “you” don’t really have control is noticing the body in action. I encourage students to notice the body doing things on its own. So right now you’re reading. You haven’t really noticed how the eyes are sweeping from side to side, moving down the screen. You certainly weren’t issuing conscious commands to your eyes to do this. In fact your eyes are making tiny jittering movements that are completely outside your control. Who is reading?

Or when you’re walking, catch yourself in the act of moving your legs (you were probably thinking about something and only dimly aware that your legs were moving) and notice how you weren’t giving any conscious instruction to the many muscles in your legs, which were nevertheless doing a great job of getting you from point A to point B. Who is walking?

Or when you’re driving, notice how your hands, arms, legs, and head are all smoothly operating in such a way as to control the vehicle. There may in fact be times when you’re lost in thought and are totally unaware you have been driving. Who is driving?

In a sense, “not-you” is reading, walking, driving (and breathing, blinking, swallowing, and twitching the big toe on your left foot). These are completely outside your consciousness, and so aren’t really part of your (conscious) self. And your conscious self is just (sometimes) noticing the actions of these parts of you and — and this is important — thinking that it runs the show. Most times, as soon as you become aware of your reading, driving, walking, blinking, swallowing, toe-twitching, “you” assume that “you” are doing these things. Of course “you” weren’t even aware of them a moment before.

This sense of ownership is a form of clinging, and clinging is a source of suffering. Feeling that you “have” a self, you have something to defend. Your self is perceived as being in conflict with other selves, so there’s aggression. So it’s this sense of ownership that we need to lose in order to experience a deeper sense of peace.

But, you are still objecting, you can desire to move my arm, and your arm moves — thus! Surely that demonstrates ownership. Well, not really! Where did the thought “I’m going to move my arm” come from? It came from “down there” in the not-self. You didn’t create the thought consciously. It just appeared to you. Its having appeared to you, you claimed ownership of it, but you didn’t in fact create it. Then the thought having appeared, it is heard “down there” in the not-self — those parts of “you” that aren’t really you because you can’t control them or even really know them. And the “not-you” that is “down there” then initiates a series of actions that raise the arm. You certainly don’t say “OK, I’m going to contract the deltoid at such-and-such a rate and applying such-and-such a force at the same time as I relax the pectoralis major, and at the same time I’m going to relax the triceps and contract the biceps…” It all just happens.

And sometimes it doesn’t. If someone say, shows you their pet tarantula and tells you it’s perfectly safe to touch it, you may find that you’re telling your arm to move but “down there” the “not you” decides that it’s very much not, thank you very much, going to comply. Or you can be hypnotized not to be able to move your arm: “down there” has received an instruction from someone else not to move, and it’s not going to listen to “you” (which is to say, other parts of “down there”).

If you’re just reading this account, it may make no sense. You’re busy answering the question “who walks” with “Me, you dummy.” It’s actually scary to let go of this idea that we own ourselves, just as it’s scary for kids not to believe in Santa Claus even if their parents have told them that Santa Claus is a myth. (I’ve been there.) But if you start to actually observe what I’ve been describing, it all becomes very real. By listening to your words appear, by noticing how thoughts just arise, by catching your body in the act of moving, you can trick yourself into letting go of your automatic habit of claiming ownership of your thoughts, words, and actions. There’s a profound letting go, and you notice that thoughts, words, and actions are simply arising, without ownership. And this is tremendously liberating.

The sense of ownership that we carry around with us requires a tremendous amount of energy. It’s a burden. As the Buddha said,

Taking up the burden in the world is stressful.
Casting off the burden is bliss.
Having cast off the heavy burden
and not taking on another,
pulling up craving, along with its root,
one is free from hunger, totally awakened.

We pull up the “root” of craving, which is this sense of “owning” a self.

So, what’s the relevance of this to upekkha? Upekkha is the desire that beings (ourselves included) experience the supreme peace of awakening. One way to experience awakening for ourselves is to let go of clinging to a sense of “ownership” of our thoughts, words, and actions: “casting off the burden is bliss.” But we also compassionately (or upekkhafully) desire this peace for others. We desire that we and others lay down the burden of self. What I’ve outlined above is a way to un-self — to realize that this burden is an unnecessary one.

PS. You can see all of our 100 Days of Lovingkindness posts here.