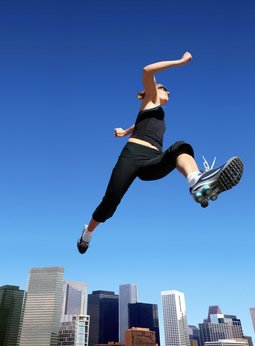 Recently a woman wrote to me to tell me about her meditation practice. One thing she said was very interesting. She said “I can’t connect with lovingkindness meditation.” We hear this kind of statement all the time, and most of us use this kind of language frequently: “I can’t…”

The problem with this kind of thinking is that it represents a very fixed view of ourselves. These statements purport to define the speaker. Moreover the definition is a very limiting one. Once we say that we “can’t” do something we’ve made it less likely that we ever will. Once you’ve said something like “I can’t sleep” you’ve moved from description to something more like a declaration of intent. You might as well say “I won’t sleep.”

I’m not saying that every use of the words “I can’t” or “I can never” is always self-limiting. “I can’t run a mile in three minutes” or “I can’t be in two places at once” are just simple statements of fact. But very often these words suggest that the speaker has lost faith in him or her self. When we speak this way we suggest that we are passive victims of circumstance — that we real have no choice, because there are no choices open to us. We’ve given up.

When I hear people using “I can’t” language, I usually suggest that they try out a different way of expressing themselves and see how that feels. So compare the feeling tone of the following statements with those above:

There can be added complications. Take the statement “I can’t meditate.” This one represents an extra problem. It limiting, in the same way that other “I can’t” statements are limiting, but it’s not quite adequate to say “I haven’t yet found a way to meditate.” Why is this? It’s because the statement “I can’t meditate” is a compounded error. Not only is it limiting us by defining ourselves (saying that we have a lack of ability), but it goes a step further by falsely defining meditation.

What does it mean to “meditate”? When someone says “I can’t meditate,” they probably really mean to say something like “When I tried meditating I didn’t like the results I experienced.” They have an idea of meditating (it’ll be blissful and I’ll be able to stop the flow of anxious, angry, restless thoughts) and what they experience isn’t like that. So they think they’re doing meditation wrong. Having decided they’re doing meditation wrong, they assume that they are incapable of doing it right: hence, “I can’t meditate.”

But the thing is, it doesn’t mean you’re not meditating properly just because you’re experiencing lots of thinking and don’t feel happy. In meditation we have to start where we are, and work from there. So if there are lots of thoughts, there are lots of thoughts. If you’ve noticed that fact, that’s not failure. It’s success. So the person who says “I can’t meditate” has actually been meditating; it’s just that they’ve assumed that they weren’t. They’ve had unrealistic expectations. They hadn’t yet found a way to accept their experience while meditating.

So sometimes we need to dig a little deeper, and to uncover other false assumptions that lurk behind that innocuous-looking “I can’t.” Sometimes we need to peel away the onion-skins of self-definition, and to liberate ourselves from limiting self-views.

Thank you, this is really helping me during my current hardships.

Also finding me self in a space dukkha brought about not only by external causes of conditions but also internal causes and condition.

I agree with the general vcontent of the article. And even though the phrase – or ‘mantra’ if you wish – “i haven’t yet” is way more skill than “I can’t” their is also some danger in it. “I haven’t yet” may be use to delay things and as the old adage go “procrastination is the thieve of time”. One of my Buddhist teacher taught me; the best way to over come unskilful mindsets is to take skilful vows and to simply adhere to them in practice.

tested it and it works.