Lovingkindness as a path to awakening (Day 25) 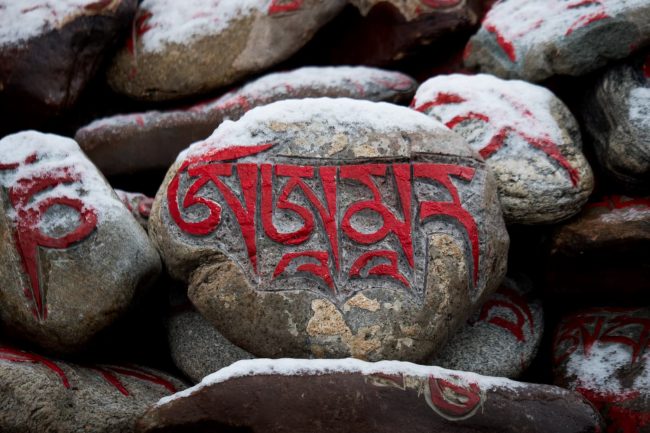 The Buddha is recorded as having said:

For one who mindfully develops
Boundless loving-kindness
Seeing the destruction of clinging,
The fetters are worn away.

If with an uncorrupted mind
He pervades just one being
With loving kindly thoughts,
He makes some merit thereby.

But a noble one produces
An abundance of merit
By having a compassionate mind
Towards all living beings.

The way I think of the Buddhist path of practice these days is that it’s all about “un-selfing.” Normally we are “selfing” all the time — “selfing” being a rendering of “ahamkara,” which literally means “I-making.” Every time we experience craving or aversion, we are creating, from an essentially undifferentiated mass of experience, a sense of a separate self. We have a mass of undifferentiated experience, and some of those experiences we have aversion towards, or try to push away. In the act of pushing, there is a sense that we are pushing them away from “us.” And so there’s a reinforcement of the sense of “I.” I don’t like this. I don’t want this. Similarly, with craving there is some experience that is clung to, held onto. And in the act of clinging or holding there is a reinforcement that there is this thing called “me” that is appropriating the experience. I like this. I want this.

All practice helps us to “un-self.” Lovingkindness “unselfs.” When we’re experiencing kindness we’re not capable of experiencing ill will or craving. Our ill will and craving, not being exercised, become weaker. “The fetters are worn away.”

Lovingkindness practice also helps us to do more “we-ing” (and I apologize for the infantile sound of that term, but I also hope it brings a smile). When we’re “we-ing” we’re not selfing. In lovingkindness practice we recognize that all beings are like ourselves. We all want to be happy; we all find happiness elusive. And knowing this to be true, we feel less inclined to obstruct others happiness, and want to assist others in finding happiness if we can. Our concerns move from being all “in here” (how can I be happy) and move “out there” (how can we, or they, be happy). We become kinder.

In the final stage of the practice, having a compassionate mind towards all living beings, there is an emphasis on spaciousness, as I’ve explained in the last two posts.

In the approach that the Buddha seems to have taught, we become aware of each of the directions, and we pervade each with lovingkindness. What I’ll tend to do in this stage of the practice is to become aware of the actual space around me. I’ll notice the the light, the space, and the sound. I’ll notice sounds in particular in a non-reactive way, simply allowing them to exist. I don’t try to hold onto sounds, nor do I try to push them away. This in itself is a form of unselfing, since craving and aversion are being dropped. And I’m aware that there are living beings in the space I’m aware of (both in the physical space I’m attending to and in the mental space of my mind, in the form of memories or imagination). And I’m wishing them well. The space I’m perceiving is pervaded with kindness, because my mind is pervaded with kindness.

But noticing the space and sound in particular contribute to a sense that my consciousness is no longer something that’s “inside” me, but is something that extends out into the world. I can almost feel my mind filling the space around me. This is not simply imagination. All experience happens in the mind. Whether an experience is a thought or the sound of a passing jet plane, the experience happens in the mind. We perceive the thought as being “in here” and the sound of a jet being “out there” only because of a more subtle kind of selfing that divides experiences into “self” and “other.” When we simply pay attention to so-called inner and so-called outer experiences at the same time, eventually we mind puts less and less effort into making this distinction. As we pay less attention to whether our experiences are “in here” or “out there” these two concepts cease to have so much (or sometimes any) meaning.

And so there are several kinds of unselfing going on. There’s the unselfing that consists of dropping the selfing activities of craving and aversion. There’s the unselfing of “we-ing” — of seeing other beings as having the same basis needs as ourselves and, with a mind of kindness, being prepared to help them find happiness. And there’s the unselfing of no longer considering ourselves to be “in here” while the world is “out there.” We allow there to be “a mass of undifferentiated experience” that we don’t divide into a self and an other. All thought of there being a self may be lost. At first this loss is temporary, but this can become a permanent state. At this point the fetters (or at least some of them) have been broken, and the experience of awakening has begun.

So lovingkindness is not a “basic” practice. It’s one that can take us all the way.

Bodhipaksa
Bodhipaksa has been meditating since 1982 and teaching since around 1989. He is a Buddhist practitioner and teacher, a member of the Triratna Buddhist Order, and a published author. He launched the Wildmind website on November 11, 2000. Bodhipaksa has published many guided meditation CDs, guided meditation MP3s, and books. He teaches in various meditation centers around the world. He is supported by donations from members of the Wildmind community. If you're interested in becoming a supporter and in getting access to more of Bodhipaksa's teachings, please click here to learn more about his meditation initiative.
100 Days of Lovingkindness, fetters, insight, lovingkindness practice, metta