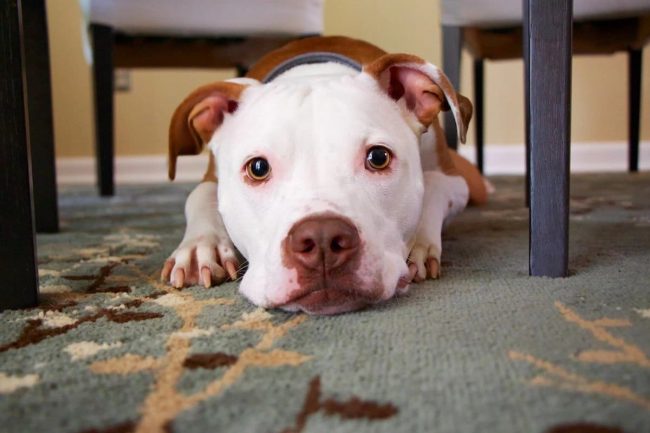 I have a daily Zoom meditation group as part of Wildmind’s Meditation Initiative, and there are often a few pets in evidence. In fact one day someone commented that it must be “Take Your Dog to Meditation Day.”

In some ways pets are natural meditators. I’ve had a few cats in my life, and currently have a couple of dogs, and their ability to “just sit” and to be in the moment puts mine to shame.

At the same time, sometimes when we’re trying to meditate they want to get involved in ways that are distracting, and so that’s the topic I’d like to address today.

I stress I’m talking about cats and dogs here. And since I currently have two dogs and haven’t had a cat in a long time it’s almost inevitable that I’ll be talking mostly about dogs. Hopefully you’ll be able to adapt what I say here to your particular circumstances.

Even before I meditate, I’ll separate my dogs from each other. When they play together it’s a very noisy affair. There’s lots of running around, wrestling, and growling. I don’t want that going on when I meditate. We have baby gates in the house, so I can have one dog in the room with me, and the other one in the next room. Because the one in the next room (that’s Suki) can see through the barrier, there’s no anxiety. I’m right there.

If the dogs seem to be restless as I’m preparing to meditate, I’ll often give them something by way of a distraction. Suki is still teething, and so I’ll make sure she has a teething toy; it’s kind of distracting to realize during a meditation that your dog is destroying the kitchen cabinets. And sometimes I’ll give them each a “Kong” (a thick rubber cone) filled with frozen peanut butter. That keeps them busy for a good few minutes while I settle in to meditation, and after they’ve done with their treats they usually settle down as well.

Next, if their human sitting still with their eyes closed isn’t something they’ve been exposed to before, your pet may be confused by you meditating. My experience has been that they get used to it in time, although you may have to work with them until they do. And maybe they never will.

A cat of mine called Piglit used to be very curious when I meditated. Sometimes she’d just come and sit beside me with her eyes closed, looking for all the world like she was joining in with me. Other times she’d bat at me with a paw, trying to get my attention. One of my dogs, Luna, does this as well. In fact sometimes she’ll stare at me and bark. It’s hard to ignore.

When this happens I think it’s best to be empathetic. This can be a confusing situation for your animal. Ignoring them can make them even more confused. Often they need attention.

And they’re individuals, so forcing them to do something isn’t very kind. Don’t feel that your dog “should” quietly sit as you meditate. Why should they? You need to work with them on their own terms.

Today, during an online sit, I opened my eyes to see one of the participants sitting cross-legged between her two Labrador retrievers. She was holding one dog’s paw, and had a hand resting on the neck of the other. In order to get her attention they’d started barking during the meditation, and this was her way of calming them down. Given this small degree of contact, both dogs were perfectly happy and relaxed, and were just lying quietly beside her.

Most pets love touch, so simply reaching a hand out to them and making contact, or let them make contact with me, if sometimes enough to calm them.

If you have to stroke your pet in order to help them settle, that’s fine. A lot of people think this would be a distraction, but you can pet your animal mindfully and with kindness, so that it becomes part of the meditation.

Luna, who stays in the room with me, is small, so if she’s really persistent in trying to get my attention I’ll often pick her up (if she’ll let me) and sit her on my lap. (Suki’s too large for that.) That makes it easier to pet her and show her reassurance. She rarely stays on my lap for more than 15 minutes, and then she’ll jump back onto the floor. I’m happy to let her go. That’s what she wants to do.

Often I’ll include Luna in my lovingkindness (metta) meditation. My favored way of cultivating metta — which I just think of as “kindness” — is to remember what it’s like to look with loving eyes. I’ll remember times I’ve watched my kids sleeping, for example. As soon as I do this, I feel a sense of warmth, tenderness, and softness around my eyes. And then as I turn my attention toward my own body, and Luna sitting on my lap, those same qualities are brought into the way I’m regarding the two of us.

With my eyes soft, relaxed, and kind, I’m able to embrace myself and my dog in a single field of loving awareness. There’s no question of this being a distraction. When I’d doing this I’m very concretely cultivating metta (kindness) for myself and another living being. We are, experientially, one body, not two.

When Luna is on my lap, she’s usually very happy to have her back stroked or her tummy tickled. (Until she decides she’s had enough and goes away.) Sometimes though she wants to lick my face. So I’ll just accept that as part of my meditation practice. I’m accepting kindness, which is an important practice in its own right. Usually she doesn’t do it for long.

Sometimes my dogs bark while I’m meditating. A neighbor might be taking their dog out, or a delivery worker might be dropping something off. And the dogs see it as their responsibility to defend the house. When Luna (my first dog) started doing this, I was a bit annoyed at first. I wanted to yell at her to get her to shut up. Then I saw her hackles were up and realized that she was physiologically and emotionally aroused. She was experiencing anger, and possibly fear as well. Her territory was under threat, and she was trying to ward off this menace and to alert me to danger.

So it became obvious that what she needed was reassurance. So when she’s barking like this (and I’m not meditating) I’ll go through to her, pet her to calm her down, and emphasize that the person or dog outside is a “friend.” (I’m training her to recognize that as a reassurance word.)

In meditation I don’t get up and pet the dogs, but —without moving — I do talk to them reassuringly. I’ll say things like, “It’s just a friend, Luna (or Suki)! Thank you for protecting the house. Good girl. It’s just a friend, though. You’re OK. You’re OK.” (“You’re OK” is another phrase I’m training the dogs to recognize as reassuring. I reckon that if they associate “You’re OK” with the experience of calming down, those words will start to be effective even without physical contact.)

Again, you might think that this is a distraction from the meditation, but I see it as part of the meditation. If I was dealing with a knot of anxiety in meditation, I’d talk to it in a similar reassuring way: “It’s OK. I’m here for you. I know this is scary, but we’re safe right now. I love you and I want you to be happy.”

It’s the same principle here, except that the knot of anxiety is in my dog’s belly rather than mine. All suffering deserves to be met with compassion. My dogs’ barking is a sign of their suffering. Therefore I respond compassionately.

Of course you have the option simply to let your dogs bark. After all, it’s an impermanent phenomenon and will therefore come and go. But I live in an apartment building and I think it would be a bit obnoxious to let my dogs disturb other people. And unrestrained barking isn’t a habit I want to encourage.

Although I’ve said that sometimes your dogs need reassurance and comfort, sometimes they don’t! Or at least sometimes it’s better just to let them quiet down on their own, and maybe give them just minimal attention or no attention.

This morning while I was sitting, Suki started whining in the kitchen. I decided just to let her work through her emotions on her own. It isn’t really in my or the dogs’ long-term best interests if I jump up and attend to them every time they whine. After all, they whine every single time I leave the house, and I don’t respond by staying permanently at home. That the dogs are sometimes unhappy is something I just have to learn to tolerate. So be patient. They’ll be OK.

And bear in mind the insight that things are impermanent. “Things” here include my dogs’ feelings. They may be unhappy for a minute, but they’ll calm down and be at peace. Your feelings are impermanent too. It may be unpleasant to hear your dog crying, but it won’t go on forever.

It’s a judgement call to decide whether to intervene or not. Everyone is different, and all animals are different. I bear in mind, “Is this for our [i.e. mine and the dogs’] long-term happiness and well-being.”

So these are the kinds of situations I sometimes encounter meditating with dogs in the house, and some of the ways I respond to them.

In fact I’m sure some of you have evolved your own ways of meditating with pets. Perhaps you could share them in the comments below. I’d love to hear from you.

Bodhipaksa
Bodhipaksa has been meditating since 1982 and teaching since around 1989. He is a Buddhist practitioner and teacher, a member of the Triratna Buddhist Order, and a published author. He launched the Wildmind website on November 11, 2000. Bodhipaksa has published many guided meditation CDs, guided meditation MP3s, and books. He teaches in various meditation centers around the world. He is supported by donations from members of the Wildmind community. If you're interested in becoming a supporter and in getting access to more of Bodhipaksa's teachings, please click here to learn more about his meditation initiative.
empathy, loving-kindness meditation, lovingkindness practice, meditation and compassion, pets, animals & meditation