A creative encounter in the Vortex 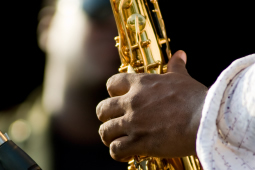 Vajradaka looks back on a meeting in a smoky Jazz club and explores the mystery of empathetic communication between artist and audience.

I once had a chance encounter with a jazz musician that had a big effect on me and characterized some of the important qualities of living a creative life. At the time I was living up in the hills of Wales and coming down to London periodically. During one such visit I went to a jazz gig at the old Vortex in Stoke Newington, as part of the London Jazz Festival. It was smoky and dark with only a dozen people in the audience. We did not need much empathy to realize that the turnout was dispiriting for the musicians. They were a jazz trio from LA and had just flown over for the jazz festival and a few other gigs.

In the first set it became clear that they were really good musicians, very competent and experienced, but while they were playing it became clear something essential was missing. The way that I thought of it at the time was that there was no creativity in their improvisation or set pieces. At the end of the set the drummer with a tone of desperation pleaded with us not to leave during the interval. I’m sure that quite a few people had thought about it, but everyone stayed.

I went to the bar to get some drinks for my friends and got into conversation with the main man who was a saxophonist. He was English but lived in LA and worked full-time playing music. He had his own trio and also worked as a session musician with some of the big and famous groups. When I told him I lived in a Buddhist retreat centre in North Wales he became quite animated. He sometimes meditated at a Zen Center in LA and went on Zen retreats. He found it made a big difference to his creativity, particularly when he was practicing his instrument or had a gig. He said that when he meditated during the days that he had a performance his jazz was far more fluid and creative.

He said he experienced an important relationship between the discipline of doing the scales diligently day after day and the creativity that happened during improvised performance. Practice and performance were intimately connected, one feeding the other. He was quite clear that his ability to express creativity at the highest level during performance came out of all the hours honing his musical skills and keeping a creative frame of mind.

He started to explain how he experienced creativity in performance. At the actual moment of creativity he didn’t have to try at all, there was effortless effort; it just flowed out of him. It was like being in an open dimension, without limitation, the music just arose and passed away. Nothing was contrived and the notes arose spontaneously within the chosen “tune.” He was there playing but not identifying with himself, nor was he “self-conscious” about playing. The music came through him and used all the skills that he had developed over years of disciplined practice. There was no separation between creativity and him.

When he entered into that state of creativity in a performance, even in a big venue with thousands of people everyone knew when he was there in that creativity. There was something noticeably different in the atmosphere. The audience’s awareness of his creativity affected him, which in turn plunged him deeper into the flow of creativity. At a certain point there would be no difference between him and the audience, it was as if everybody was participating in the creative process. For him this was the greatest prize of being a professional performer and what he valued most was maintaining that creative state of mind and following it wherever it went in the music

He was slightly sad for a moment and said he was aware that he was out of touch with all of that in the last set. It seemed to take a long time for the drinks to come, so we carried on talking about this relationship between the spirit of meditation and creativity. He saw a direct relationship between entering into an open state of mind in meditation and being open to creativity when he played the saxophone. He had a really good feeling for it and as we talked we both entered into that open vibrancy of mind that can happen in both meditation and creativity.

Creative improvisation was happening in communication between us. There was inspiration in our words and we entered into a world of exploring what was of real value and significance to us. A sense of freedom and potential flowed between us. I suppose he felt supported and engaged in what was most important for him and for my part I felt as if I had met a soul brother. The vibrancy and aliveness that existed between us in that moment of communication is also at the heart of both creative improvisation and the spirit of meditation.

At the beginning of the next set when he came on stage he asked for requests I immediately put up my hand and mentioned a tune from one of Miles Davis’s Kind of Blue album. He knew exactly what I was talking about and hummed it to the group and gave them a few instructions. When he started playing everything was different. He had arrived in that creative place where the music just flowed out of him.

I found myself becoming completely captivated, but when early on I took a brief glance at the audience, they were all completely with him. That creative interchange between performer and audience was growing deeper by the moment. He had arrived at the place of creative improvisation that he most valued and we all were right there with him.

The music took me to a place of freedom and infinite possibility that stays with me still. I couldn’t tell how long the set was, as there was no sense of time. It seemed to me that he knew I was there and I was completely there with him, the concept of us being apart dissolved. My whole being seemed to vibrate with the resonance of the saxophone, He was taking me on a long journey through every kind of emotion. It was as if we went everywhere in the universe and then gradually and very gently we came back to earth and the Vortex club. After a pause the audience went ecstatic, he looked directly at me, smiled and winked.

Vajradaka has been a full-time Dharma practitioner and meditation teacher since the beginning of 1973, and started practicing meditation in Japan in the late 1960’s.

Vajradaka lived for 21 years in a meditation retreat center in Wales called Vajraloka. He recently finished a year-long writing sabbatical and now lives in a Buddhist community in London. You can read Vajradaka’s blog here.

Vajradaka
Vajradaka has been a full-time Dharma practitioner and meditation teacher since the beginning of 1973, and started practicing meditation in Japan in the late 1960's. Vajradaka lived for 21 years in a meditation retreat center in Wales called Vajraloka. He recently finished a year-long writing sabbatical and now lives in a Buddhist community in London. You can read Vajradaka's blog here.
Read more articles by Vajradaka
: communication, creativity, music