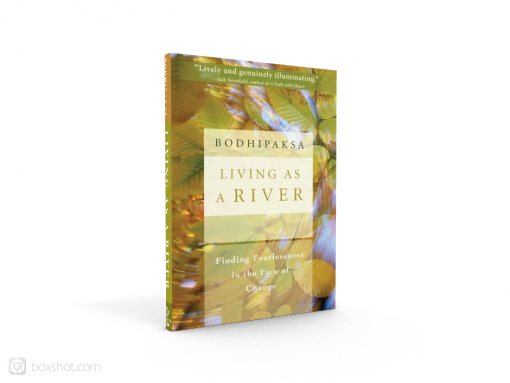 My book, “Living as a River,” is an experiential exploration of the Buddhist teaching of non-self.

Last year I was honored to run a workshop on self-compassion at the New York Insight Center. I’ve been invited back to teach again this fall, and this time I’ll be involved in two events.

The first one isn’t on the NYI website yet, as far as I know. I’ll update this post when that changes. It’s a conversation between myself and James Shaheen, editor of Tricycle: The Buddhist Review. We’ll be discussing the topic “Debugging the Dharma” as part of NYI’s Dharma in Dialogue series, which has included teachers such as Sam Harris, Sharon Salzberg, and David Loy.

Tricycle has been running a lot of articles recently debunking misunderstandings of Buddhism that are common among modern western practitioners. It’s a sort of “straightening out” of what is and what isn’t Dharma. There have been contributions by Bhikkhu Bodhi, Bhikkhu Thanissaro, David Brazier, and myself. I’ve been contributing columns on Fake Buddha Quotes, such as this one.

Of course I also have my fakebuddhaquotes.com website, and my recent Buddhist Geeks conference talk was based on the idea that the Dharma texts and commentaries are sometimes garbled, but that the understanding of Dharma that comes from practice, plus insights from scholarship, can help us get closer to what the Buddha might actually have been trying to communicate.

So it seems that both James and myself have a desire to “straighten out” some of the teachings that we’ve received, or to clarify what those teachings are actually saying. I think it’ll be a great conversation.

“From Me to We—And Beyond!”

The second event is about realizing interconnectedness. This is the key to living with wisdom and compassion. Buddhism teaches that the delusion of separateness is at the root of all our unhappiness, and encourages us to recognize our deep connectedness to all beings and all things.

The Buddha gifted us a beautiful meditation—the Six Element Practice—to help us let go of our narrow sense of self-identity so that we can experience instead an expansive and liberating sense of connection with the world and with other beings.

In this day-long retreat we will explore our interconnectedness with each other and with the elements, with planet earth and with the universe. We’ll learn to see ourselves afresh, with awe and appreciation at our place in the scheme of things, and a sense of gratitude and wonder at the miracle of being.

The day will include sitting practice, as well as short talks, with plenty of time for group sharing.

As for what’s “beyond we”—you should attend the day event if you can, but it involves letting go of any identifications whatsoever, since identifying anything as “I” (or even as “us”) involves limiting our perspective on who and what we are. The state of Awakening involves complete liberation from all limiting perspectives.

Find out more at the NYI website. My last event was very full, so I’d advise booking early.