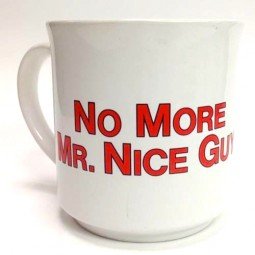 Recently Euan, whom I don’t know, wrote a comment expressing his dismay at a girl turning him down because he was “too nice.” Here’s what he wrote:

I only started meditating in December 2014 and was seeing this girl for a while, we went on a couple of dates, the first went well and the second went ok. We continued messaging each other but she seemed less keen, then today she told me she felt we didn’t click and didn’t want to meet again. She said I paid her too many compliments and was too nice. I’m just so angry because I felt like she was leading me on and we had been speaking for at least two months as I first met her in December but I went home to university and so didn’t see her again until 2 weeks ago where we had the two dates and I thought things seemed to be going well. I just want to know what I’m supposed to think I guess. From what I’ve learned for my short period of meditation is that we should love each other, but when someone tells me they don’t want a relationship because I’m “too nice” it makes me question what I’m doing. Like should I stop being nice to girls I want potential relationships with, and how am I supposed to not get angry at her for me being too nice. What is so wrong with the world that people don’t like being treated nicely, it perplexes me.

Sorry if this doesn’t read smoothly, I’m writing this immediately after I found out and my almost immediate reaction was to question how I am supposed to think like a Buddhist when bad things happen to me for being too nice.

Euan’s experience is not unique. I’ve been there myself in the past, and when I was young I found myself astonished and sometimes angry at the way some women I’ve been interested in gravitated to men who seemed to me to be jerks. And although my anger never turned into a general hatred of women, this evidently happens with some men. But I still had a lot to learn.

So I want to talk about “being nice,” from the point of view of a man who’s realized that “being nice” is not as “nice” as “nice men” like to think it is. I’m not advocating being unkind, and certainly not advocating ill will or hatred. I’d like to talk about how “being nice” is not actually kind, is a form of manipulation, and is not, in most cases, what women need or want. And I’m sorry, Euan, but some of this may be hard to read. I don’t mean to be unkind or to hurt your feelings, but instead want to act as a kalyana mitta (spiritual friend) who points out things we need to know but may not want to know.

What’s a “nice guy”? A “nice guy” is a man who thinks that the way into a girl’s heart (and bed) is by being agreeable and flattering. Here are a few characteristics of “nice guys,” drawn from a Wikihow article:

The psychology of “nice guys” has been written about a lot. Here’s a great analysis of the whole phenomenon from Geek Feminism Wiki.

Being a “nice guy” is a strategy. It’s not who someone fundamentally is, although “nice guys” are very conscious of and attached to their identity (self view) as “nice guys.” 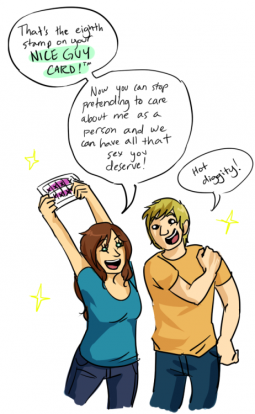 The purpose of the strategy, as I’ve said, is to attract and keep a woman. A cartoon by Callmekitto about “nice guys” shows a woman jubilantly holding up a card, similar to one of those “Buy ten cups of coffee and get one free” cards. She’s saying to the young man beside her, “That’s the eight stamp on your Nice Guy Card! Now you can stop pretending to care about me as a person and we can have all that sex you deserve!”

The cartoon is brutally frank, but it’s making the point that acting as a “nice guy” assumes that relationships are a form of transaction: I’ll pretend to be the kind of person I think you want, and then you’ll give me sex and approval.

As the cartoon indicates, the man who is playing at being a “nice guy” isn’t actually relating to the woman as a full human being. He’s not being himself, and may even have lost touch with who he is. He doesn’t want to express his needs and won’t challenge his intended partner in any way because he thinks that risks pushing her away. In fact the opposite is the case. Few women want a partner who doesn’t express himself and who avoids conflict. A conflict-averse partner is neither going to stand up for you not stand up to you.

The “nice guy” is far from practicing metta, or kindness. Metta is based on empathy (anukampa), which is an awareness of the other person as a person — as a feeling being who has needs. In fact the “nice guy” role is based on craving. You desperately want something (sex, companionship, approval, the status of “being in a relationship”) and you go through the moves that you think will get you that thing. But there’s no actual awareness of the other person, which is unattractive, and so as a “nice guy” you’re constantly finding that you don’t get what you want. In fact it’s not just that you want the things I’ve mentioned: you deserve them. After all, you’ve given the endless compliments, you’ve refrained from expressing what you really want in just about any situation (“No, any movie you choose is fine with me!”), you’ve studiously avoided expressing any needs (“No, it’s not a problem that you stood me up”). You’ve been nice. You’ve cranked the handle on the machine, and how it’s time for your reward!

When the reward doesn’t come the first few times, you might be depressed. But then you get angry — but not just at the girls who rejected you, because you start to realize that almost no girl is going to give you what you deserve. And you do, you think, deserve the sex and the love you want, because you’re not even conscious that “nice guy” is a role you’re playing, and you think it’s who you are. So you both want and hate women, or “bitches,” as you may think of them. As another cartoon (actually it’s more of a “meme”) says, “Women never date nice guys like me. I hate those bitches.” Frustrated craving turns to hatred.

I want to re-emphasize that the “nice guy” is a role that men play. It’s not who they fundamentally are. So in criticizing the actions of “nice guys,” I’m not saying that there’s something irretrievably flawed about them. Just that they need to so some work in becoming more self-aware, braver, more honest, and more genuinely empathetic and loving.

The Wikihow post I linked to above has some advice for stepping out of the “nice guy” role, but I’ll say just a few words about developing the qualities I just mentioned.

Euan said, “From what I’ve learned for my short period of meditation is that we should love each other, but when someone tells me they don’t want a relationship because I’m ‘too nice’ it makes me question what I’m doing. Like should I stop being nice to girls I want potential relationships with.” 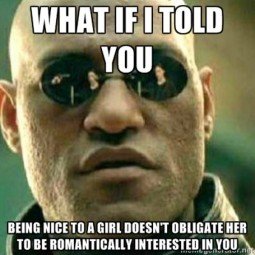 The men a “nice guy” thinks of as “jerks” — the ones they see girls with all the time — are more enjoyable for just about any human being to be with, let alone a romantic partner, than any self-consciously “nice guy.” They aren’t acting. They’re more inclined to be honest about what they want and feel. When they give compliments it feels sincere because they’re not doing it all the time. They offer challenge. They call out bullshit. We all need that.

I’m not saying that every “jerk” is really a good guy. Some jerks cheat or are violent. Those are real jerks. But even a real jerk might be more fulfilling to be in a relationship with than someone you don’t know because they’re constantly playing a role, and when there’s the underlying threat, which isn’t that hard to pick up on, that they’ll turn nasty when they don’t get what they want. Better the devil you know than the one pretending to be “nice” all the time, perhaps.

So being a “nice guy” isn’t nice. It’s fake. So yes, “nice guys” should stop being “nice.” But that doesn’t mean being unkind. It doesn’t mean treating people badly. It means becoming self-aware. It means “manning up” and having the courage to be honest so that you can be in a genuine relationship with another human being rather than acting out a role in order to get a reward.

Bodhipaksa
Bodhipaksa has been meditating since 1982 and teaching since around 1989. He is a Buddhist practitioner and teacher, a member of the Triratna Buddhist Order, and a published author. He launched the Wildmind website on November 11, 2000. Bodhipaksa has published many guided meditation CDs, guided meditation MP3s, and books. He teaches in various meditation centers around the world. He is supported by donations from members of the Wildmind community. If you're interested in becoming a supporter and in getting access to more of Bodhipaksa's teachings, please click here to learn more about his meditation initiative.
empathy, lovingkindness practice, metta, mindfulness & sex, psychology and meditation, relationships