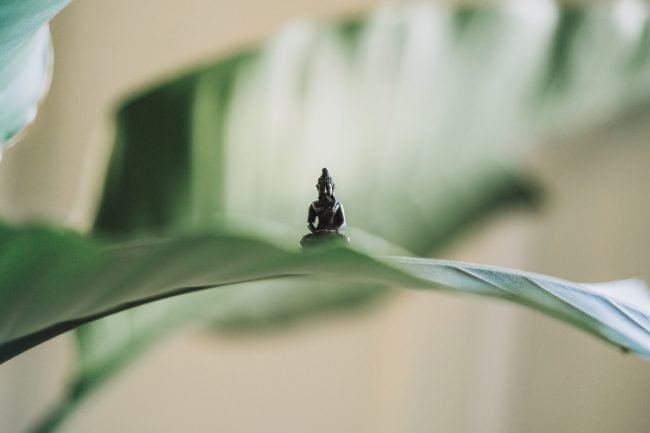 For the past month I’ve been recording a series of daily guided meditations, taking as my basis the teachings in a Buddhist discourse called the Honeyball Sutta. This teaching (also sometimes called the “Honeycake Sutta” outlines a feedback loop whereby we end up causing ourselves suffering.

It describes how the basic situation is that consciousness, through sense organs, perceives objects (which can be internal, like thoughts, or external, like the words you’re reading now). This is called “contact.” The word “contact” contains the assumption that there is a self “contacting” a world that is separate from it. The Buddha is not saying this is how things actually are — just that that’s how we assume things are.

Within this field of contact we then have feeling responses to certain perceptions. The sutta doesn’t spell this out, but when the mind detects something as a potential threat it generates unpleasant sensations (feelings) in the body. When it detects a potential benefit it generates pleasant feelings. When something appears to have no bearing on our wellbeing no feeling (a “neutral feeling”) is produced.

What we have pleasant or unpleasant feelings about, we turn our attention to.

What we turn our attention to, we think about.

What we think about we (sometimes) obsess about.

What we obsess about assails us (i.e. causes us suffering) and reinforces our sense of having (or being) a separate self.

So we have a vicious circle, starting with the assumption of a separate self, and reinforcing that sense of separateness. Assuming we are separate, and feeling assailed, we continue to search among those things we have pleasant and unpleasant feelings about, trying to find peace by obsessing about them. This goes on and on and on.

A friend of mine recently gave a talk about this sutta, and he did the usual thing of talking about how mindfulness helps us to damp down the reactivity of this vicious cycle. If we find ourselves thinking obsessively then we can let go of them. With practice we can find ourselves experiencing our feelings and not have that turn into “storytelling” at all. This is of course perfectly valid as an explanation—but it’s also incomplete, because the discourse goes much further than this.

The sutta points out that were there is “no eye (or other sense organs), nothing seen (or perceived through the other senses) and no consciousness, then there is no feeling, no turning of our attention, no thinking, no obsessing, no being assailed, and no construction of a sense of self.

Now this might sound very odd, and might come off as nihilistic. What does it mean that there’s no eye (etc), nothing sensed, and no consciousness? Is it pointing to some state of blankness? To non-existence?

No, it’s simply talking, in very stripped-down language, about how we can drop the notions of a consciousness that is “me, mine, or myself” and a world out there that is “not me, not mine, not myself.” The alternative to this is just being. We just drop the whole process of reactivity all at once: not just letting go of our reactive thoughts, but coming to rest in an awareness of “self-and-world” without conceptualizing in terms of there being a self and a world. (We don’t even conceptualize that self and world are one, because that’s still a conceptualization in terms of self and world.)

Of course this isn’t something we can do in a “one and done” fashion. It’s something we need to do repeatedly, so that as we practice “just being” this starts to become the way we operate. But it is something you can do right now. It’s probably best to stop reading these words for a while and then spend a few minutes doing the following:

Now that isn’t difficult. Sure, lots of thinking probably came up. And maybe you saw that as a threat to your wellbeing, and if felt unpleasant, and you had the desire to push that away, to make it stop. And that was you back into reactivity again. But you can notice that, and let it go. It’s natural that resistance and craving arise. You’ve spent a lifetime practicing those!

But for moments, perhaps quite a few moments, there is no conception of our having (or being) a self that perceives a separate world through our sense organs. Consciousness is not perceived as self, and that which is perceived by consciousness is not perceived as other. The whole self/other thing is simply set aside. And we don’t see our feelings as being threats to our wellbeing; instead they just are, and there is simply an awareness of them. And so (in those moments of pure being) the mind doesn’t obsess, and we’re not assailed, and we’re at peace.

This is something, as I’ve said, that we can practice. Now sometimes when people hear that word “practice” they think “Oh, that means there are lots and lots of things I have to do and then I can experience a sense of peace and calm. But practice doesn’t just mean “doing preparation” (like practicing scales on a piano so that you can play Bach). It also has to mean “getting better by actually doing something.” Letting go of your sense of having or being a separate self is something that you can do right now. The peace, contentment, and wellbeing that come from letting go is something that you can experience right now.

Peace is available right here, right now. Don’t try to grasp it. Don’t resist anything you think might be keeping it from you. Just be peace.

Bodhipaksa
Bodhipaksa has been meditating since 1982 and teaching since around 1989. He is a Buddhist practitioner and teacher, a member of the Triratna Buddhist Order, and a published author. He launched the Wildmind website on November 11, 2000. Bodhipaksa has published many guided meditation CDs, guided meditation MP3s, and books. He teaches in various meditation centers around the world. He is supported by donations from members of the Wildmind community. If you're interested in becoming a supporter and in getting access to more of Bodhipaksa's teachings, please click here to learn more about his meditation initiative.
anatta (non-self), feelings, peace, self, The Buddha, vedana