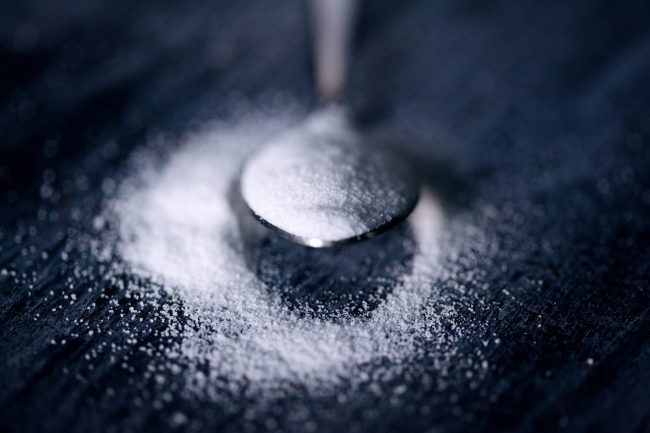 Many, many years ago, when I was in my twenties, I was at the apartment of a newly divorced woman I’d just started dating when her ex dropped by unexpectedly. Awkward! Especially since she had just popped out of the house and wouldn’t be back for a few minutes!

Trying to be a good host, I offered him a cup of coffee. He accepted. I imagine he was grateful that we could diffuse this tense situation through a little social ritual.

He asked for sugar with his coffee, and I wasn’t familiar with where it was kept. But after a little searching I found a sugar-bowl and, as requested, measured out two heaped spoonfuls into his mug. He took one sip and his face contorted into a look us disgust. It turned out that the “sugar” I’d given him was actually salt! Now, having apparently tried to poison my girlfriend’s ex, I felt really awkward! I was convinced he’d think I’d done this deliberately.

Anyway, the moral of the story is that it’s possible to confuse two things in a way that has unpleasant results. And this happens with spiritual practice even more than it does with unlabelled bowls of white granular substances.

The Buddha once talked about wrongly understanding the teachings as being like grabbing a snake by the wrong end. If you need to pick up a snake, you want to take a firm hold of it just behind the head. Grab it by the tail and it’s going to loop around and bite you.

So what kinds of snake do people grab by the wrong end? (Or to put it another way, what kinds of salt are people putting in their coffee thinking it’s sugar?) Here are just four.

Non-attachment means being aware of your own clinging and desires (e.g. wanting to have things your own way) and letting go of them. In our daily lives we can practice non-attachment in many ways: for example letting go of your compulsion to speak about yourself and choosing instead to listen empathetically to another person.

Non-attachment doesn’t mean “not caring,” or emotional detachment, which is how some people think about it. Equating non-attachment with not caring is usually self-serving. The environment? Well, everything’s impermanent anyway, so what does it matter if species go extinct and people’s crops are ruined by drought?

True non-attachment helps us to see our emotional avoidance strategies, and to set them aside so that we can truly care. Genuine compassion, caring about others’ suffering just as we care about out own, is a form of non-attachment.

Maybe you stay with a partner who’s unsupportive, or you have a friend who talks nonstop and won’t let you get a word in sideways. And you never challenge them, because you’re practicing “patience.” After all, haven’t we had it drummed into us that we can’t make the world into a perfect place, and that it’s up to us to change.

But the thing is that that partner’s unsupportiveness isn’t making them happy, and neither is the friend’s logorrhea. Quite possibly neither of them wants to be asked to change (generally we don’t like change), but both of them would be more fulfilled if they did.

Sometimes you’re doing both yourself and others a favor if you’re more demanding and less “accepting” and “patient.”

At one time I assumed that the Buddhist tradition was wrong on this point, but as I learned more about practicing empathy I realized that the traditional teaching fits my experience. I realized that a lot of the time when I thought I was being compassionate toward others I was either being “nice” to them because I wanted them to like me, or I was being “good” so that I could feel good about myself. And both of those things arose out of me not liking myself and not being kind to myself.

As I learned to have more self-empathy, I found that this empathy, and the compassion that arose from it, naturally flowed toward others. What do you know? The tradition seems to be right, and a lot of what I had thought to be kindness wasn’t really kindness at all.

The teaching of karma (which, incidentally, is not as large a part of the Buddha’s overall teaching as most people seem to think) was really meant as something we applied to ourselves. You want to be happy? Look at what you’re doing, since it can either create ease or suffering, peace or turmoil.

One of the consequences of this is that Buddhists often misuse the teaching of karma in order to validate their judgements of others: People are suffering? Well, they must have done something to deserve it. And so why should I feel compassion for them? If we really understood karma in this situation we’d be looking at our own reaction to others’ suffering, would realize that judging others is something that creates pain for us, and would find instead a more compassionate way to relate.

If you would like to support Wildmind in producing articles like this, and get access to dozens of online meditation courses, please look into becoming a sponsor for as little as $6 a month.

Bodhipaksa
Bodhipaksa has been meditating since 1982 and teaching since around 1989. He is a Buddhist practitioner and teacher, a member of the Triratna Buddhist Order, and a published author. He launched the Wildmind website on November 11, 2000. Bodhipaksa has published many guided meditation CDs, guided meditation MP3s, and books. He teaches in various meditation centers around the world. He is supported by donations from members of the Wildmind community. If you're interested in becoming a supporter and in getting access to more of Bodhipaksa's teachings, please click here to learn more about his meditation initiative.
empathy, karma, meditation and compassion, non-attachment, patience, The Buddha