From Snow White to sadhana: Growing up under the influence of Ratnasambhava 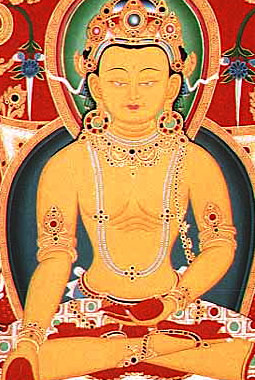 Ratnasambhava is, amongst other things, the Buddha of generosity. Danamaya explores the open-handed Buddha of the south.

In some ways, I may have known Ratnasambhava all my life, although I didn’t learn about Buddhism until high school, and then only from an introductory article in a comparative religion class. But looking back I can see all sorts of important themes in my life that got their start in little experiences long before. As a kid, I loved fairy tales, especially the Grimm Brothers. There were always buried treasures uncovered, or led to for someone who’d been set an impossible task who was a small, weak or humble person but who was actually a worthy, noble person in the making.

At around that same time, when I was about 7 years old, a couple of movies came out that fascinated me. Snow White and the Seven Dwarfs impressed me with the gem-mine that the Dwarfs labored in — sparkling, perfectly faceted and finished jewels of all colors, right from the black rocks. And then there was Journey to the Center of the Earth — especially the part where the explorers’ lamps are failing, and they turn them off only to find that walls glow on their own, and they wander through galleries of huge jewel-like crystal formations.

Back then, I walked to school, and got to thinking about how we never really know what’s under the ground we walk on. Why, for all we know, there could be, right in this spot, if we dug down, a chest full of rubies and pearls and gold! Who knows how long it’d been there? And all these people walking over it with no idea, whatsoever! Years later, I’d understand more about the power of the mythic and the archetypal.

Sometimes, it’s not you who chooses your yidam, the Buddha whose visualization you will take up. They sometimes choose you!

When I first encountered the Dharma through the Triratna Buddhist Community, I came across the Mandala of the Five Buddhas. Such a rich collection of symbols and associations, organized to reflect so many layers of meaning! About a year before I was ordained, I mysteriously began to be attracted to the color yellow — the kind of deep, rich golden yellow like turmeric or saffron. I’d go into a bead shop and get drawn immediately to the golden yellow beads — citrine, amber, topaz. And also, mysteriously there were piles of glowing jewels that appeared spontaneously in my mind’s eye with no logical reason for them to be there. Often, these events would be accompanied by a sense of being loved or feeling sudden confidence in the goodness and the bounty of the world. So, who is golden yellow, associated with jewels and bounty and joy and beauty? Oh, right! Ratnasambhava. I didn’t know it then, but sometimes, it’s not you who chooses your yidam, the Buddha whose visualization you will take up. They can choose you! Very mysterious, indeed!

Ratnasambhava is one of the Five Transcendent Buddhas, sometimes known as the Five Jinas (Victorious Ones), who are depicted as a Mandala. The Five Buddha Mandala is thought to have originated early in the Mahayana renaissance, perhaps in the 4th century CE. Amitabha and Akshobhya were the first to be portrayed as visualizations of Wisdom and Compassion. In the Sutra of Golden Light, two more figures, Dundubishvara and Ratnaketu became Amoghasiddhi and Ratnasambhava, respectively. Vairocana emerged as the central, unifying concept, although all five were regarded as aspects of the Dharmakaya — as manifestations of reality. As archetypal figures, they are evocative of the deepest, purest qualities we all have, at least in seed-form, in the depths of the heart of our psyches. Contemplating the Jinas, dwelling in their mandala, it’s possible to reorient ourselves towards true refuge.

Located in the South of the Mandala, in his Pure Land Srimat, the Glorious, the Harmonious, Ratnasambhava is the great jewel-becoming, jewel-producing Buddha of Generosity and Beauty.

Incandescent golden yellow as the noon sun on Midsummer’s Day, he sits on a yellow lotus which is supported by four splendid horses in the vast blue sky of Boundlessness. And yet he is Earth Element purified. He purifies the skandha of vedana (feeling/emotion). He transforms the addictive poisons of arrogant pride, avaricious greed and the three conceits (I’m better than everyone, I’m worse than everyone, I’m the same as everyone). These become Ratnasambhava’s wisdom of the equality, the boundless sunya nature, of all things.

Clothed in russet silk robes, embroidered with gems, his left hand holds the Wish-Fulfilling Gem, the Bodhicitta. His right hand stretches out over his knee, palm outwards. This is the varada mudra, the infinite giving of the greatest gift, which is always just the very thing that’s needed, and no holding anything back. A friend once said that she finds it compelling that Ratnasambhava’s hand is tipped so far forward that nothing could ever stay in that hand — something I have found immensely beneficial to reflect on. If I want to become that — become the perfection of generosity — how could I give so completely that nothing could ever stay in my hand?

There are said to be four types of generosity. You can give material objects or aid such as food, money or items. You can give your time and energy. You can give the Dharma. And you can give the gift of fearlessness. The perfection of such giving is when there is no difference experienced between the giver, the receiver or the gift! It’s the act itself, spontaneous, selfless.

Dana paramita (perfect, egoless giving) is also a wonderful antidote to craving. Looking at the world, all the catastrophes, all the suffering, it is so easy to slip in to thinking that there is never enough, there are too many wants and needs. This is a hazard in the spiritual life — craving caused by poverty-mentality. It’s delusion, of course, and our challenge is to see through these confusions — not only are there so many resources of so many types, and even though they’re strewn around, right under our noses, we can easily get stuck on the material aspects or how little time or energy we think we have, forgetting that there are those two other types! Think of it — truth and fearlessness–how far those could take us!

Selfless open-handedness is far from mindless…

I also think there is such a thing as ‘bad’ generosity. ‘Bad’ not in the sense of evil; more like something that’s gone bad in the fridge, maybe. It gets that way when the motive is corrupted, such as when a person gives in order to be liked. The second precept encourages us to abstain from taking the not given. But I’ve also been thinking about how unskillful it is to try to give what other people neither want nor need. For instance, if you don’t believe you can get your own needs met, or have developed the unskillful habit of ignoring your own needs, it could be easy to then project that onto others and focus your energy on ‘helping’ them. Perhaps it’s one of the types of co-dependence. Selfless open-handedness is never mindless and it is always kind. Awareness is our friend in so many ways.

After coming home from my ordination retreat in 2002, I set about finding out how to integrate this whole experience of ordination, of taking on Ratnasambhava’s sadhana (visualization) practice, of now being Danamaya and not this other person I had been, but not different, exactly. Choosing, or, in my case, being chosen by, a transcendental figure, is not your everyday experience. What remains with me now, from that magical time when I was formally ‘introduced’ to my yidam, is that there’s just an awful lot a human being can’t really know. It’s not straightforward. For one thing, I’ve never seen his face in meditation — and I think that’s him teaching me not to get conceptual about it. But then, he will ‘appear’ as the light between the cracks in the world, between one thing and another — expanding my heart from the center outwards. Relaxing into how things are, their essential nature, right now: boundless, endless, free.

How Ratnasambhava and I ‘chose’ each other is another story, for another time, but that I have been changed (and continue to be!) by my experience of this beautiful and immense Jina is a continually unfolding delight for me. We are all on our own mythic journeys. These great archetypes are wonderful guides and protectors. I am content to be ‘under the influence’ and also under the protection of Ratnasambhava.

Ordained in 2002, Danamaya practices at the San Francisco Buddhist Center, where she regularly leads evenings on chanting, ritual, and sometimes themed Dharma study series in which multimedia art figures strongly.

By day she works as a nurse practitioner at a multidisciplinary clinic serving youth 13-22 yrs. She also plays viola in a local orchestra.

Danamaya
Originally from L.A.(but not a Valley Girl!), Danamaya moved to San Francisco in 1986 to become a Nurse Practitioner. At her first job as an NP, she met Karunadevi and the Triratna Buddhist Community (at the San Francisco Buddhist Center), and never looked back. Ordained in 2002, she still works with teenagers in that same clinic in Daly City, plays the viola, and makes very nice little shrines for people.
bodhicitta, generosity, giving, mandala