Ravenna Michalsen is a Dharma songstress with ambitions to start an “American Buddhist music movement.” Her second CD of Buddhist-inspired songs, appropriately named Dharmasong, has just been released. We talked to Ravenna about her message, her music, and the challenge of remaining egoless in the spotlight.

Ravenna: Yes! America has such a long, diverse, and wonderful musical tradition. Our society is very music-oriented. It is very hard to go anywhere without hearing music, which is one of the reasons retreat centers can feel so peaceful. Much of the constant music in our world can be mentally tiring, chock full of thoughts, emotions, and conceptual chitter-chatter.

Dharma-inspired music can both play into our society’s deep love and obsession with music and shift its aural orientation from something often deeply klesha-based* to something less harmful. Both “Dharmasong” and “Bloom,” my first album, are devotional albums that feature songs about various figures from ancient Indian and Tibetan Buddhism. My hope is that these songs turn the listener’s mind toward the teachings of the Buddha, which is essentially anything that holds us back from unskillful action.

(*Editor’s Note: Kleshas are negative mental states that cloud the mind’s nature and manifest in various forms as unskillful actions of body, speech, and mind.)

W: So how would you define the “American Buddhist music movement”?

R: Hm, well, that is a bit complicated. I like the term “American Buddhist” because I find it a bit more culturally accurate than “Tibetan Buddhist” or “Burmese Buddhist,” etc., if the practitioner is actually an American…

So, while traditional Buddhist cultures all have their own musical traditions, which then have informed their Buddhist musical traditions, the United States doesn’t quite quite have that yet. People tend to assume that because I write Buddhist-inspired music, my music must sound “eastern” or something. I would like to change that assumption! I would like people to be comfortable owning the fact that the United States at this point has a deep and wonderful Buddhist tradition and that thus Buddhist-inspired music written here in the west has permission to sound “American”! Does that make sense?

W: It makes perfect sense. When I listen to Alison Krauss singing “Down to the River to Pray” I find myself yearning for Buddhist spirituals!

R: Completely. When I listen to Aretha Franklin sing “A Change Is Gonna Come,” I feel the exact same way!

W: So, with apologies for the clichéd question, what would you say are the main influences on your music?

R: Well, I love love love to listen to Aretha Franklin, Joan Baez, Mariah Carey, Mirah, Amy Winehouse — all singers who really put so much heart into their singing. But I don’t really sound like any of them, sadly! People often say I sound a bit Celtic, but that is totally unintentional. It’s a hard question to answer! I listen to a lot of music, but I can’t really say I try to sound like anyone.

W: What got you started in Dharma practice?

R: Well, through my mom who did some searching herself and finally stumbled upon Trungpa Rinpoche and Pema Chodron and so she introduced me to them as well…

W: I guess I was meaning something more like what was your personal motivation in taking up Dharma practice.

R: I guess feeling sad and wanting to explore my mind. Meditation and the Dharma can feel really good when you do a bunch of it — I got into it, really into the whole thing, on retreat, so right away I associated feeling good with practicing a lot. After that first month retreat that faded though — of course! Since then it’s been much more up and down, cycles of “good” and cycles of “not-so-good” practice.

It makes me feel more aware of being alive, more in touch with reality I guess. But it was sadness that really brought me to practice, rather than casual interest.

W: And when did you start consciously bringing together your music and your practice?

R: I was on a retreat in 2002 with Sakyong Mipham Rinpoche (of the Shambhala community) and he heard me sing a song called “The Contemplation Song” (originally by Milarepa, but adapted and set to music by Winfield Clark). The next day his editor brought me a poem-like song that Rinpoche had written for me to set to music, so I did that and sang it and then she brought another and I sang that and thus the idea was planted.

I went home and started writing little songs about Dharma – some kind of hybrid between the kind of music I was doing before and what I do now. But slowly I started to really consciously write Dharmic songs, usually before or after a practice session. It wasn’t until I went in to record “Bloom” that I had to truly think about the combination of whatever kind of music I write with these dharma-inspired topics.

W: Were you already performing at that time and if so what was your music like?

R: Yes, well, I started playing classical cello when I was eight and so was performing classical music — solo, orchestra, chamber — until I was 21, when I developed arthritis. When I was a sophomore in college I started playing with an indie rock band (cello) and starting writing music with them – just cello parts at first, then little messy songs, then more fully formed ones. I just went and found some of those older songs actually! They are kind of sweet poppy sad songs — fun to sing and play. 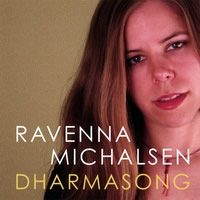 W: At least two of the songs on your new CD deal with what might be termed “feminist” issues. “Marpa” evokes the question of where are the female gurus in Tibetan history, and “A-Dron” celebrates the female lineage-holder Machig Labdron. To what extent do you see a feminist perspective as being central to your artistic work?

R: Completely central in that I am a feminist! I believe that the essential nature of both women and men is Buddhanature and that both genders have equal ability to achieve complete perfect enlightenment. However, due to historical prejudices female practitioners have been devalued and left out of the historical Buddhist cannon — which is in part why I try to include them in my songs. I also include them because I personally find their lives and stories so utterly compelling, remarkable and inspirational.

W: You’ve said that Tsultrim Allione, the author of Women of Wisdom and founder of the retreat center Tara Mandala, encouraged you to record your first CD, Bloom. Has she been a source of encouragement in helping to highlight the discrimination women teachers have faced in the past?

R: Her “Women of Wisdom” is a remarkable work in that it introduces the life stories of various great female practitioners and teachers from Tibetan Buddhism. These are stories that are largely unknown and Tsultrim did a great service bringing these stories to a wider audience. She is a very spacious person who is not particularly saddled by the idea of gender, but recognizes that others are and that that has affected the treatment of women over history.

W: So apart from wanting to promote an awareness of feminist issues in relation to practice, are there other contemporary issues that you try to bring into your work?

R: Hm, I don’t think so. I do want the music to make people think a bit, but I also want them people to have something peaceful to listen to.

W: You mentioned earlier something about modern music being klesha-based and mentally tiring. Could you say more about that problem and how your music seeks to be different?

R: I think music — like anything — can often be very klesha-based and in the end that can really tire you out. It can be fun and exhilarating for a bit, particularly as you identify with whatever passion, aggression, etc., comes up in the song. But stepping back a bit, identifying with the thoughts or emotions generally leads us to believe them and then act based on those thoughts and emotions, rather than seeing the thoughts and emotions as just arising and passing away at their own rate. Believing our thoughts tends to lead to believing more of our thoughts and having our actions based upon those beliefs — and that generally leads to lots of samsara!

I definitely aspire to have my music be a bit different – but of course it isn’t! Maybe the subject matter is different — not so overtly packed with klesha — but in the end it depends on the mind that listens to it.

W: What does the rest of your practice look like — the stuff that isn’t directly connected with music?

R: I try to go on retreat a few times a year and practice daily in some form, not always the same practice — I tend to do the practice that fits what is going on in my life. Right now I am co-teaching a class at the New Haven Shambhala Center called “Taming the Mind,” which is a great way to verbalize what my practice has brought up for me.

W: Performing can be a very ego-based thing, being literally in the spotlight and having everyone paying attention to you. Is that something you’ve had to work with as part of your practice?

R: Excellent question. This is an issue that I have had to work with pretty much constantly, and it is rich! When I actually sing, it is not really a problem, because I am concentrating on the object of singing. But it comes up more when people come to a concert and then don’t donate or the center is (as it seems to me) stingy with paying or sharing donations. Then I get a real flare of both ego and the sort of ego-based, but also reasonable, question of why people think that art should just be free. That it is OK to listen for an hour and walk away without offering anything by way of support or to burn CDs without thinking about how that artist lives — actually lives: buys gas, groceries, rent, clothes, etc. I don’t charge a fee to sing and very much struggle with whether I should, and somewhere in there is a mix of ego, figuring out how to survive financially and self-worth.

I am very shy in some ways, so hanging out after shows hearing praise and such makes me uncomfortable. But I do like (and even crave) people to be quiet and appear to really listen when I sing. It’s a great profession to be in if you want to be reminded of all your edges!!

R: Not yet! Dharmasong, in the scheme of things, only just came out! So I will be plugging it for a while! I spend a lot of time arranging concerts — so if there is a center/group out there looking for a concert of dharma music, email away!

But then again, I am always sort of writing – but not in a concentrated way, just letting things come up.

W: Thanks very much, Ravenna. It’s been good talking to you.

R: Thanks so much. It’s been enjoyable.

Dharmasong is available through www.RavennaM.com and CDBaby, and also on iTunes.

You can check out Ravenna’s performance schedule and hear some of her music on her MySpace page.

I’ve completed the music album, Festival Canceled Due To Heavy Rain, inspired by my recent journey to Cambodia.

I send this sample (Kulen Mountain) as a New Year’s gift of peace to you:
https://www.rainbowdharma.com/downloads/files/kulenmountain.mp3

[…] Ravenna in an interview with Wildmind.org, “Both Dharmasong and Bloom, my first album, are devotional albums that feature songs about […]