I started this 100 Days of Lovingkindness just after our new year drive to get people meditating regularly — our 100 Day Meditation Challenge — was coming to an end.

Naturally there was a lot of discussion on our Google+ community about what we were going to do to follow on from our first 100 days, and many people were keen on exploring mindfulness, using a wonderful book by Jan Chozen Bays, called How to Train a Wild Elephant. But I really wanted to explore lovingkindness practice and the other Brahmaviharas.

There are no doubt many reasons for this. One is that I’d lost my temper a couple of times, and although I’d been able to let that pass very quickly I was aware that I still had a lot of work to in deeply imbuing my mind with love, patience, kindness, and compassion. I needed to rewire my brain for love, at a much deeper level than before.

Not long after that I was leading an online Dharma Study group one night, and we were exploring the Buddhist precepts and the basis of Buddhist ethics. (This group meets in a Google+ Hangout, which is a form of videoconferencing.) And as part of our studies we explored the following passage, which is from The Ten Pillars of Buddhism, a book Sangharakshita wrote on Buddhist ethics. Take a deep breath — it’s a long quotation and it includes other quotations.

Killing is tantamount to the rejection of the most basic principle of ethics, just as the cultivation of love represents this principle in its positive form. As Shelley so finely says:

“The great secret of morals is love, or a going out of our own nature, and an identification of the beautiful which exists in thought, action, or person, not our own. A man, to be greatly good, must imagine intensely and comprehensively; he must put himself in the place of another and of many others; the pains and pleasures of his own species must become his own.”

In the Bodhicaryāvatāra, or “Entry into the Way of Enlightenment,” Śāntideva gives this principle what is probably its highest expression in Buddhist literature. In his chapter on “Meditation,” after describing how a man stills vain imaginings and strengthens his “Will to Enlightenment” (Bodhicitta), he proceeds:

“First he will diligently foster the thought that his fellow creatures are the same as himself. “All have the same sorrows, the same joys as myself, and I must guard them like myself. The body, manifold of parts in its division of members, must be preserved as a whole; and so likewise this manifold universe has its sorrow and its joy in common…I must destroy the pain of another as though it were my own…I must show kindness to others, for they are creatures as I am myself…Then, as I would guard myself from evil repute, so I will frame a spirit of helpfulness and tenderness towards others.”

…I will cease to live as self, and will take as myself my fellow creatures. We love our hands and other limbs, as members of the body; then why not love other living beings, as members of the universe?…Thus in doing service to others pride, admiration and desire for reward find no place, for thereby we satisfy the wants of our own self. Then, as thou wouldst guard thyself against suffering and sorrow, so exercise the spirit of helpfulness and tenderness towards the world.” 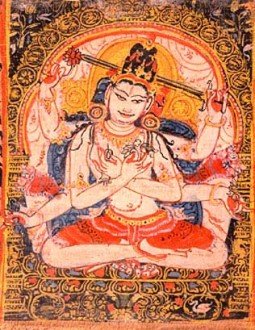 This is what is known as the practice of equality of self and other, and the substitution of self and others. Blake gives succinct expression to the same principle when he declares “To put another before you is the most sublime act.”

I’d read this book several times, and this particular passage even more often, but I found myself more receptive to it that night than ever before. And I thought, Yes, I want to live a life that embodies and exemplifies compassion. I want compassion to be the main thing I do.

And so I proposed that we do 100 Days of Lovingkindness, and fortunately it turned out to be the more popular of the two options. (Bear in mind though that we’ll start to explore How to Train a Wild Elephant when the current 100 Days is over.)

The Mahāyāna, a Buddhist movement that began a few hundred years after the time of the Buddha, strongly emphasized compassion. Śāntideva, who is quoted above, wrote passionately about developing compassion, and saw it as being central to the path of the Bodhisattva. The Bodhisattva is one who is not only set on enlightenment, but whose deepest wish is to help others attain the peace of enlightenment too.

The compassion that Śāntideva describes, and that was central to the Mahāyāna, is actually identical to upekkha. Now that statement makes little sense if you take upekkha to be “equanimity,” which is the standard translation. But upekkha literally means “closely watching” and is a brahmavihara, which means it’s a loving quality. The peace or equanimity of upekkha is what we experience when we closely watch our own experience, and peace is what we wish for others. In other words, in upekkhā bhāvanā our deepest wish is to help others attain the peace of enlightenment. The compassion that the Mahāyāna teaches is actually a bit different from the compassion of the brahma viharas. It’s deeper, more far-reaching. It includes an acute awareness that the only way we can help someone to be completely free of suffering is to help them become awakened. It’s more closely aligned with insight, as upekkha is.

If you benefit from the work we do, please consider supporting Wildmind. Click here to make a one-time or recurring donation.

As Buddhism developed, somehow the loving and compassionate nature of upekkha as a brahmavihara became overlooked, and the quality of even-mindedness or equanimity was seen as being its defining characteristic. This gave the impression that in the brahmaviharas we start with love, then develop compassion, then develop joy, and then cool everything off by becoming equanimous. The word equanimous has a “straight from the fridge” coolness, or even frostiness, about it that can be very off-putting. It’s hard to be inspired by the ideal of equanimity.

But upekkha isn’t fundamentally about equanimity. It’s closely watching other beings and guiding them to the peace of awakening. And that is inspiring.

There’s a mythic Bodhisattva (Bodhisattvas can be people like you and me, but sometimes they are human images of enlightenment) called Avalokiteshvara. Avalokiteshvara literally is “The Lord Who Looks Down” with compassion upon beings, although I like to think of him as the Lord Who Watches Closely Over beings with compassion. So I see upekkha and the Mahāyāna take on compassion as being the same: closely watching over beings with the desire that they find the peace and equanimity of awakening. And that’s not a cold quality at all; it’s warm, and loving — and wise, and it brings about in ourselves and others the biggest turn-around you can have.

PS. You can see all of our 100 Days of Lovingkindness posts here.

Bodhipaksa
Bodhipaksa has been meditating since 1982 and teaching since around 1989. He is a Buddhist practitioner and teacher, a member of the Triratna Buddhist Order, and a published author. He launched the Wildmind website on November 11, 2000. Bodhipaksa has published many guided meditation CDs, guided meditation MP3s, and books. He teaches in various meditation centers around the world. He is supported by donations from members of the Wildmind community. If you're interested in becoming a supporter and in getting access to more of Bodhipaksa's teachings, please click here to learn more about his meditation initiative.
100 Days of Lovingkindness, Avalokitesvara, bodhicitta, equanimity, even-mindedness, upekkha, upekkha bhavana