The body-wide wave of breathing 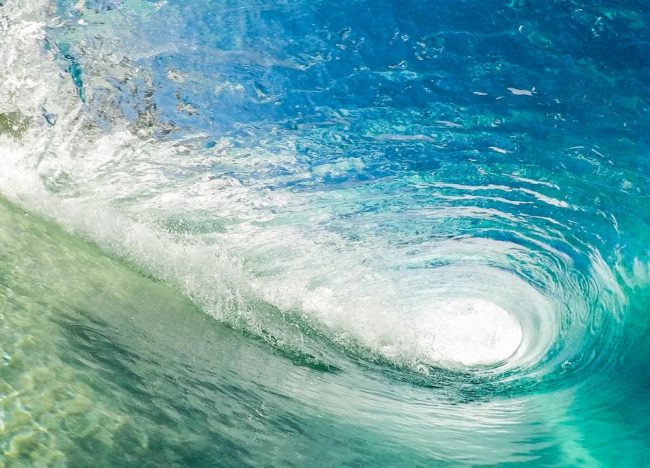 When I’m teaching a refresher course on meditation, I’ll often ask people first of all just to meditate for a few minutes to arrive, paying attention to the breathing as they normally do. After letting them settle in to their meditation practice for a few minutes I’ll ask that they take one hand and — as they continue to pay attention to the breathing — “draw” in the air over the body the outline of whatever it is they identify as “the breathing.” You might want to try that right now, before reading further.

I wonder what kind of shape you drew on the body, and where? Most people end up inscribing a very small area. Sometimes they show that they are paying attention to a column of air moving up and down their airways. Most often they draw a small oval, perhaps the size of an open hand, in the center of their chest.

It seems that many people, when they hear the suggestion to observe “the breathing,” take this as a suggestion to observe “the breath.” But the breathing and the breath are two very different things. The breath is air (or the sensation of air) flowing in and out of the body. The breathing is all and any sensation connected, however indirectly, with the process of air flowing in and out of the body. This potentially includes sensations from the whole body, since indirect sensations connected with the process of breathing can be experienced even in the hands and feet. But it at least involves the whole of the trunk of the body: the front, sides, and back of the chest and abdomen, sensations on the skin that covers those parts of the body, the shoulders, the spine — and of course air flowing through our airways.

When we’re paying attention to the breathing in this more expensive way, the practice becomes much more interesting. Focusing on just a small area of the breathing just doesn’t give the mind enough to do, and because the mind doesn’t like being under-occupied it invents distractions for itself. When we pay attention to many different sensations the mind has plenty to do, is less likely to go wandering, and is more engaged and absorbed.

This absorption can go even deeper than simply noticing lots of different sensations. Once we open ourselves to noticing sensations of breathing over the entire body (or at least a large part of the body) we can notice how those sensations are connected with each other and move together.

After all, the breathing is one process. No matter which sensations we observe, they’re all part of a single wave of movement driven by the movements of the diaphragm. Air flowing in and out of the nostrils, the rise and fall of the shoulders, the ever-changing pattern of sensation where our clothing moves over our skin, the movements in the spine, and of course the movements of the rib cage and of muscles in the abdomen — all of these are part of a wave of sensation, surging back and forth through our entire being.

Paying attention to the breathing as a body-wide, dynamic, rhythmic flow is far more engaging than observing just one small area of the breathing, and even more fascinating than observing several sensations at the same time. It brings about a deep level of absorption in which we can be content, calm, and fully engaged with our sensory experience.