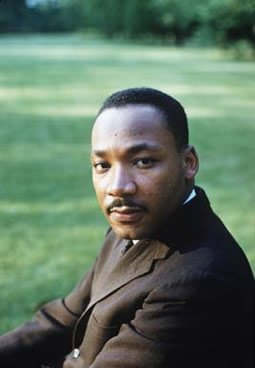 Sunada drew my attention to this detailed exposition by Dr. King on the principles and practice of nonviolence. I thought it was worth reposting in its entirety, especially given the levels of violence being directed against the Occupy protestors, and the need for the movement to remain nonviolent:

First, it must be emphasized that nonviolent resistance is not a method for cowards; it does resist. If one uses this method because he is afraid or merely because he lacks the instruments of violence, he is not truly nonviolent. This is why Gandhi often said that if cowardice is the only alternative to violence, it is better to fight … The method is passive physically, but strongly active spiritually. It is not passive nonresistance to evil, it is active nonviolent resistance to evil.

A second basic fact that characterizes nonviolence is that it does not seek to defeat or humiliate the opponent, but to win his friendship and understanding. The nonviolent resister must often express his protest through noncooperation or boycotts, but he realizes that these are not ends themselves; they are merely means to awaken a sense of moral shame in the opponent … The aftermath of nonviolence is the creation of the beloved community, while the aftermath of violence is tragic bitterness.

A third characteristic of this method is that the attack is directed against forces of evil rather than against persons who happen to be doing the evil … We are out to defeat injustice and not white persons who may be unjust.

A fourth point that characterizes nonviolent resistance is a willingness to accept suffering without retaliation, to accept blows from the opponent without striking back. ‘Rivers of blood may have to flow before we gain our freedom, but it must be our blood,’ Gandhi said to his countrymen. The nonviolent resister … does not seek to dodge jail. If going to jail is necessary, he enters it ‘as a bridegroom enters the bride’s chamber…’ “What is the nonviolent resister’s justification for this ordeal to which he invites men, for this mass political application of the ancient doctrine of turning the other cheek?” The answer is found in the realization that unearned suffering is redemptive. Suffering, the nonviolent resister realizes, has tremendous educational and transforming possibilities.

A sixth basic fact about nonviolent resistance is that it is based on the conviction that the universe is on the side of justice. Consequently, the believer in nonviolence has deep faith in the future. This faith is another reason why the nonviolent resister can accept suffering without retaliation. For he knows that in his struggle for justice he has cosmic companionship… a creative force in this universe that works to bring the disconnected aspects of reality into a harmonious whole.