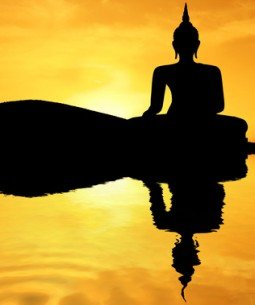 The Third Noble Truth comes directly from the Second one: The end of suffering comes with the end of clinging.

You can do this at the macro level, in letting go regarding lights turning green, or payments arriving, or your teenage children giving you a hug. Sure, you’d like things to turn out well, and that’s fine. You take practical steps toward them turning out well, and that’s also fine. But you can simultaneously have a peaceful, accepting attitude about however it turns out.

And you can let go – practicing non-clinging – most fundamentally at the micro level, with moment to moment experience.

For example, when you observe your experience, you will see that there is always a feeling tone automatically associated with it – a tone of pleasant, unpleasant, or neutral. That tone – called “feeling” in the Pali Canon (distinct from emotions) – usually triggers craving, which is the seed of clinging.

But if you can simply be mindful of the feeling tone without reacting to it – then you can break the chain of suffering!

The epitome of non-clinging is equanimity — which is not, according to a teacher, U Pandita, “. . . insensitivity, indifference, or apathy. It is simply nonpreferential. . . . One does not push aside the things one dislikes or grasp at the things one prefers.”

He goes on to say:

“The way to bring about equanimity is wise attention: to be continually mindful from moment to moment, without a break, based on the intention to develop equanimity. . .

In the deepest forms of insight, we see that things change so quickly that we can’t hold onto anything, and eventually the mind lets go of clinging. Letting go brings equanimity; the greater the letting go, the deeper the equanimity. . . .

Freedom comes when we begin to let go of our reactive tendencies. . . .

In Buddhist practice, we work to expand the range of life experiences in which we are free.”

When we do this, much of what we see is how we fall away from equanimity, from perfect balance, again and again. But seeing that ever more deeply and precisely . . . slowly but surely helps us tip over less often.