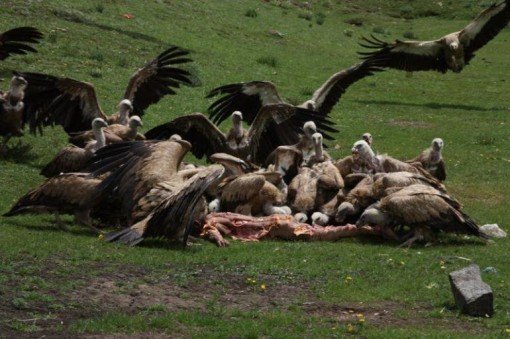 An astonishing series of photographs of a Tibetan “sky burial,” where a corpse is cut up and fed to vultures, with the remains being pounded into dust, has been viewed almost three quarters of a million times in 24 hours.

The images (view here) are very graphic, but as Justin Whitaker says, “As a poignant reminder of the impermanence of this body, they’re worth viewing.”

According to Wikipedia, in Tibet the practice is known as jhator, which means “giving alms to the birds.”

Sky burial is traditional in Tibet, where the ground is too rock for interment to be practical, and where a lack of wood similarly makes cremation unfeasible for people.

This kind of burial is a kind of meditation in itself. There’s long been a tradition in Buddhism of using corpses in order to reflect on impermanence and to reduce attachment to the human form. For example, in order to develop mindfulness the monk is encouraged to see his own body in the following way…