Waking up from the hindrance of sloth and torpor 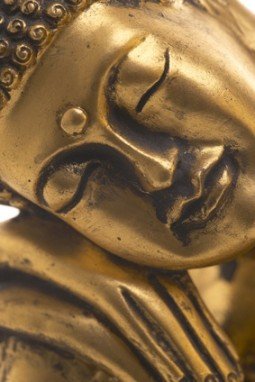 Have you noticed that half the time when you ask people how they are, they answer with “tired”? We all seem to be tired, and when we sit down to meditate we may find that we nod off or sit there in a rather dreamy and unfocused state.

This is sloth and torpor — one of the states of distraction that we call the Five Hindrances. The schema of the Five Hindrances is a diagnostic tool that, combined with traditional “antidotes,” can help us to engage creatively with our experience in order to become more joyful, calm, and focused.

Most of the specific antidotes to the hindrances that I’m learned have been shared by other practitioners, or come from the commentarial tradition, but sloth and torpor is one of the rare hindrances where detailed instructions have been preserved in the original scriptures.

In talking with one of his chief disciples, Moggallana, the Buddha gave a list of suggestions for dealing with tiredness:

“Whatever perception you have in mind when drowsiness descends on you, don’t attend to that perception, don’t pursue it. It’s possible that by doing this you will shake off your drowsiness.

One of the main applications of this is that when you’re tired, you shouldn’t focus on sensations low in the body. Rather than paying attention to the movements of the abdomen, which will further encourage sleepiness, you should notice sensations that are higher up in the body, like the sensations of the breathing in the upper chest and head.

Reflect on the Dhamma — the Buddhist teachings — helps to focus the mind, preventing it from drifting aimlessly. Also, the reminder of a “higher purpose” may have the effect of inspiring us and of arousing our energy and enthusiasm. You can run through a list such as the Four Noble Truths, of the Five Precepts, or the Eightfold Path, and give yourself an inner Dharma talk. You can even imagine that you’re explaining the teachings to a friend. A lot of people don’t have these lists memorized, which is a shame, and I’d highly recommend the practice of committing these teachings to memory. The effort really pays off in terms of mental clarity.

So, this is the same advice, but here we’re talking out loud, which is further going to prevent us from falling asleep. For obvious reasons this method isn’t very appropriate when you’re meditating with others.

So now we move on to physical stimulation, which gets the blood flowing, and which encourages the release of endorphins. The most useful form of stimulation I’ve found is yoga stretches — particularly when we stretch the hamstrings or hip muscles.

Water in the face gives us a creative shock to the system.

This suggestion also takes us more in the direction of paying attention to light, which is the next piece of advice we’ll hear. Also the suggestion of raising the head to look up is significant. When we’re tired, we look down and the chin drops. When this happens, a chain reaction is kicked off: our experience is visually darker, our breathing shifts to the abdomen, and the center of our awareness typically moves downward in the body. All of these things heighten our sense of sleepiness. These effects can be noticeable with even a tiny movement downward of the chin. Raising the chin can cause mental stimulation.

If you have candles on your altar, then you can open your eyes and look at a candle. You can visualize light. You can imagine that you’re looking at a bright light. Or, if you relax and just notice your field of awareness, you may notice that some parts of your experience are brighter than others. You can pay attention to those in order to keep yourself alert. This can actually be a meditation in its own right.

“But if by doing this you don’t shake off your drowsiness, then — reclining on your right side — take up the lion’s posture, one foot placed on top of the other, mindful, alert, with your mind set on getting up. As soon as you wake up, get up quickly, with the thought, ‘I won’t stay indulging in the pleasure of lying down, the pleasure of reclining, the pleasure of drowsiness.’ That is how you should train yourself.

Finally, the Buddha recognized that sometimes you just need to take a nap! The strategies above can help combat and even overcome tiredness, but in the end you’re fighting your physiology, and your physiological needs are going to triumph.

There are other techniques for dealing with the hindrance of sloth and torpor, but the Buddha’s advice to Moggallana is still very relevant and useful.

Bodhipaksa
Bodhipaksa has been meditating since 1982 and teaching since around 1989. He is a Buddhist practitioner and teacher, a member of the Triratna Buddhist Order, and a published author. He launched the Wildmind website on November 11, 2000. Bodhipaksa has published many guided meditation CDs, guided meditation MP3s, and books. He teaches in various meditation centers around the world. He is supported by donations from members of the Wildmind community. If you're interested in becoming a supporter and in getting access to more of Bodhipaksa's teachings, please click here to learn more about his meditation initiative.
five hindrances