What makes someone a Buddhist? 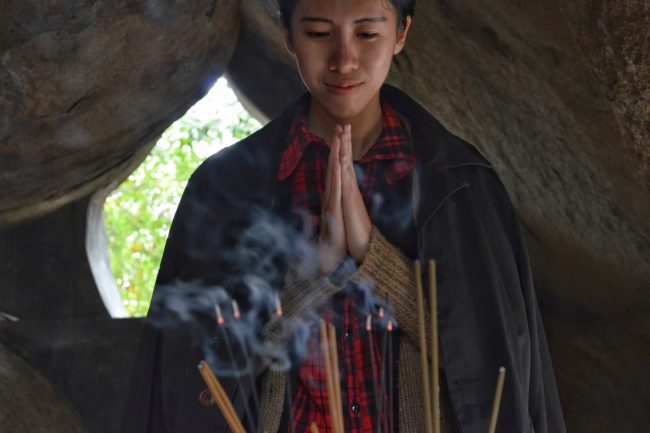 From time to time I get emails from people who wonder how to become a Buddhist. Often they’ve been practicing meditation for a while, and want to call themselves Buddhists, but they’re not sure if it’s — and please pardon the miscegenation of religious terminology — “kosher” to call themselves a Buddhist.

Traditionally, the starting point of regarding yourself as a Buddhist is known as Going for Refuge to the Three Jewels. The Three Jewels (Triratna, or Tiratana in Pali) are the Buddha, Dharma, Sangha. The Buddha isn’t just the historical individual we call the Buddha, but the ideal of enlightenment itself, which I’d characterize as the attainment of a state of deep mindfulness and compassion that arises from an insight into the non-separateness of the self. The Dharma is the path, the teachings, and the practices that lead ultimately to the realization of that insight, and to the attainment of that state of deep mindfulness and compassion. The Sangha is the spiritual community of all those who are treading that path and putting those teachings into practice, using meditation and ethical observance in order to deepen their mindfulness, their compassion, and their insight.

So what does “Going for Refuge” (saraṇa-gamana) mean? The word “refuge” unfortunately has associations with the word “refugee,” which is so redolent of failure and weakness that the displaced millions during Hurricane Katrina were rarely described in the US media as “refugees.” But seeking refuge is something we all need to do. As Jim Morrison said, “No one here gets out alive.” We live in an uncertain world. We all need a source of security in life, something that gives life a sense of meaning and purpose.

The Buddha observed people doing this all around him:

He pointed out that these are false refuges, because they’re unable to provide true security. What can provide security in a world marked by change and loss? Only complete non-attachment: the deep realization that everything, including ourselves, is subject to change, and the profound peace that accompanies that realization. Those who are enlightened stand confident in the midst of the flow of change, because they do not fight that which cannot be fought. They see others vainly trying to find something stable to grasp onto, and feel compassion for them.

Ultimately the Refuges are not external. Some of the Buddha’s last recorded words were:

This may sound a little contradictory — “seek no external refuge” and “take the Dhamma as your refuge” — but the Dhamma is the truth that is to be found by closely examining our own experience, so it’s not, in the end, something external. We find the truth by looking within.

Going for Refuge to the Three Jewels involves taking this awakened stance of compassionate non-clinging as its goal. When we Go for Refuge we say in effect that we are dedicating our lives to the pursuit of spiritual awakening.

So how do we do this?

Going for Refuge is something that you can do for and by yourself, simply by reciting the words:

In Pali this is:

(You can hear this formula being chanted on this page about the Refuges and Precepts. Although many people talk about “taking refuge,” the verb in the original refuge formula is definitely “to go.”)

Actually, chanting these verses is more of a verbal acknowledgement — to yourself — of your already-existent Going for Refuge, since Going for Refuge fundamentally is an act of the heart, rather than an act of speech. Repeating the words without a sincere wish to commit oneself to the Buddhist path changes nothing.

It can be more meaningful to chant these words in the presence of others, since there’s something powerful about having our Going for Refuge witnessed by others. And in any event, since Sangha is one of the refuges, it makes sense to actually participate in one! However, depending on where you live, there may not be a spiritual community for you to join, or those that you find may not be compatible with your own style of practice. But essentially, it’s reciting the words above with a sincere heart that marks the transition to being a Buddhist.

That’s not the end, of course. While reciting the Going for Refuge verses could be looked at as a kind of initiation into Buddhism, actual Buddhist practice requires a life-long process of self-examination and of self transformation. We need to bring Buddhist ethical principles (as expressed in the five precepts, for example) more and more into our lives, and need to meditate in order to reduce the amount of craving and ill will in our hearts, and so that we can cultivate mindfulness, compassion, and insight. Going for Refuge is not a one-time act, but an ongoing act of “steering” our being toward awakening.

Bodhipaksa
Bodhipaksa has been meditating since 1982 and teaching since around 1989. He is a Buddhist practitioner and teacher, a member of the Triratna Buddhist Order, and a published author. He launched the Wildmind website on November 11, 2000. Bodhipaksa has published many guided meditation CDs, guided meditation MP3s, and books. He teaches in various meditation centers around the world. He is supported by donations from members of the Wildmind community. If you're interested in becoming a supporter and in getting access to more of Bodhipaksa's teachings, please click here to learn more about his meditation initiative.
Buddhism, Going for Refuge, The Buddha