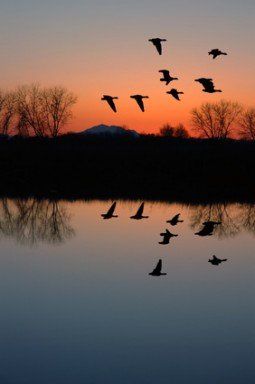 On a september night in the countryside of Wales i stood outside and watched the sunset. It was quiet and evening clouds coloured the sky…only some sign of human life in the form of some buildings a few miles further…then a sound came to my ears, first from far away and the sound increasingly became louder and louder…i didn’t know instantly that a flock of geese were approaching but from the moment of realising this my eyes looked for the geese but i didn’t spot them…i only heard them coming closer and closer…

It was a fantastic and exciting moment not seeing the birds, just hearing them and curiously seeking them concentrating myself on their sounds…all of a sudden i saw them, a dozen or so wild geese right in front of me in a few last minutes of daylight…i was totally absorbed by these geese, approaching, looking for them in the dark, just hearing them, being very excited about this, then the birds flying over me, communicating to one another and me standing there and not understanding a word or a noise of it and then disappearing again in the night….

It was a wonderful moment that reminded me of my own life, me coming into being, into the sight of others and making noises and then, after a short while, disintegrating again, and this just happens,  it just happens and it’s up to me what noises i want to make and how i want to fly….

It is beautiful if you can fly like the monks in Of Gods and Men, a French movie about christian monks in Algeria who were murdered. What appealed very much to me was the way the monks lived, quietly, simple, in stillness, studying, piling the wood, very slowly, working in the fields to grow their own vegetables….now and then taking time to look around, then taking another piece of wood and carrying on…not hurrying….not that i want to grow my own vegetables or so, not at all, i am very happy to buy them in a supermarket, but it confronted me with one of my patterns….to hurry and rush myself even in very little actions as feeding the cockatiels, getting clothes out of the washing machine, eating breakfast….

If i am not careful, so if i am not paying attention, i hurry myself and i react to anxiety, not gross but refined anxiety….so i watch these patterns and i take care of myself….in slowing down if possible, in seeing what i am doing if it is not so easy to slow down, in not giving myself a hard time, in enjoying the nice and easy rhythm if i can transform the little anxieties….

Arthakusalin
Arthakusalin lives with his family in Oudenaarde, an old Flemish city known for its tapestries. He is involved in the Triratna buddhist centre in Ghent which he considers to be "probably the most beautiful city in the world." He was raised in the Western part of Belgium, not far from Ypres, a city who still breathes the tragic stories of the first World War. After living a few years without direction or sense he decided to try to live as ethically as possible, even if life would have no sense at all. A few months later he met the Dharma and was impressed with the clarity, the simplicity and by having the responsibility for his own life. For the time being he works with adolescents with mental disabilities coming from social classes with lesser opportunities.